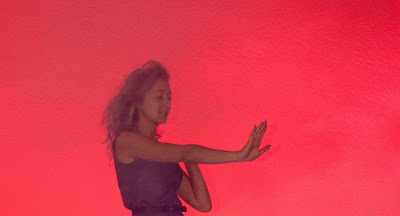 [check programme] stands on a small pedestal on Contact’s vast stage. She speaks in a Julee Cruise, breathy, childlike, sing-song voice, and is artfully lit against the giant, reddy-pink lit back wall, on which the title of the piece, “Actress (2015)” is projected like the name of an artwork on a gallery wall.

And, like that other recent Manchester gallery-piece-in-a-theatre, Neck of the Woods, part of my concern here is that I’m not watching it right. Or that it’s in the wrong space. Or that I’m in the wrong seat. Or *something* anyway. Because I’m not watching it properly. In two senses: I’m not watching it with due care and attention, but I’m also not seeing it in the right way, somehow. I’m not comfortably absorbing what it’s doing. It feels partly because I’ve chosen a seat too far away from the stage. And also, because it’s a difficult piece to absorb. It looks *nice*, although I’m not sure about how the human scale works with the architectural scale. And it sounds great: the sound design here is perfect and Contact’s speaker system really makes a virtue of it.

Perhaps my assumption that comfortable absorption should be qualified. It’s basically just what I’d like to be doing. But leaning into it and concentrating hard doesn’t seem to be working either.

Actress is 45 minutes long, and I could describe to you in detail the two or three minutes I really liked. The first minute, where we didn’t know what would happen, where we’re addressed by this floaty, shimmery vision with the other-worldly voice, the bit where the performer picks up a little fluffy toy something-or-other and calls it a “little fella”, and the bit where there are emojis in the back projection.

Most of the rest of the show is – without much variation – very like the first minute. And it is Hard. Work.

And, y’know, sometime I like hard work. So I find myself wondering why I didn’t just straight-up love this.

[And that’s where an interesting thing in criticism happens. I think I’ve floated this idea before, and below, I talk about “thumbs-up” and “thumbs-down”s being useless forms of criticism. But they might also be that from which all other thoughts follow. Put more simply: you start by having a gut reaction, and then you look for reasons to explain it. To yourself, if you’re normal; in print, to everyone, if that’s your job. And I think that privileging of personal experience and taste in British Criticism is where some of its more fundamental problems lie – even while also practising precisely this form myself.]

So, I start to wonder why I’m not loving it. Is she “talking too slowly”? Or, is it “the tone and timbre of her voice”? Perhaps “there’s something problematic about the way she’s positioning herself as a woman (and, given the title of the show, women, actresses)”? I think, to an extent, all these things did genuinely occur to me as reasonable objections during the piece, but largely because I wasn’t absorbed in the piece itself. And it wasn’t operating on me in a way that resonated at all. Unlike Tree of Codes, where, even though there was no (spoken) language at all, I was the most absorbed I’ve been recently, completely submerged in this world of the stage. And so I accredited it with probably agreeing with all my politics, and aesthetics, and everything, and would have given it five big old stars if I’d been asked.

Here I just looked, and tried to work out why more wasn’t working for me. And I don’t think I have an answer. It looked like the sort of thing I could like. Have liked things like it in the past. And I think if that had been working for me, then I could have found myself thinking that the voice, the shoes, the dress, the posture, were clever comments on that sort of male-gaze thing, rather than a perpetuation of it.

I don’t think I particularly believe that there’s an objective reality of a thing, other than maybe the colour of the lights on the back wall (unless you’re red colour-blind, in which case they might look different), or what the actual words spoken were (if i’d taken them in), though. And as such, what’s thumbs-up or thumbs-down now, but giving a number to how much the person I am was able to enjoy themselves?

[I’m now writing this review backwards, this written after the line below, and so on...]

I’m starting to wonder if the infinite recursions in my inability to start writing about this piece somehow reflect the piece itself.

In not sure how I feel about Sleepwalk Collective. Actress is the third piece I’ve seen by them. The first – Karaoke – I saw at Forest Fringe last year, in a one day marathon that also included This Is How We Die, Getinthebackofthevan’s Number One, The Plaza, and then Kiln’s The Furies. (Out of which, only TIHWD eventually got a review before I kind of gave up on Edinburgh and reviewing for a week or so). The second – As the flames rose we danced to the sirens, the sirens – I saw on the opening Monday of Flare (13/07/15) and couldn’t really see clearly, as I’d played a small part in brokering the Contact livestream on the Guardian website, and so was a) totally wrongly (for a critic) invested in it, b) watching it with half an eye on the vision-mixing desk, wondering how various bits were working for online viewers, c) defending it against imaginary trolls.

So Actress is the only thing I think I saw *properly*, with some residual reservations carried over from Karaoke and Sirens – both mine and others’ – and Meg Vaughan’s comment that she “fucking love[s] Actress”...

What should good criticism do? Obviously this is one of those questions that people writing about theatre (should) continually ask themselves. The reason I ask at the top of this review, is that I just had a conversation with a colleague about another critic who I described as “actually having very timid tastes and just following the crowd”. Of course, with any accusations of “following the crowd” one then has to carefully look at oneself to check one isn’t doing likewise. As Billington argues: “critics live or die by their independence of mind”.

This age of mainstream media star-ratings makes a nonsense of such a claim: no matter how independent your mind is, you ultimately have to submit to one of five numerical options (six if you count zero as a number – please, mathematicians, don’t write in). But, being viewed as a camp-follower does no one’s reputation any good. The real problem, though, is how one demonstrates this independence of mind.

[The “independence of mind” thing is also *completely untrue*. If anyone’s judgement was continually, resolutely opposite to *everyone elses*, then well, their “original thinking” would start to look deliberately contrary, damagingly unrelatable, or else just plain unbalanced. And, in a plural enough critical landscape, I’m not even sure it’s possible not to have a view that’s similar to someone else’s.]

I mention this, and mention it in relation to asking what good criticism should do, because one clear strategy for establishing one’s independence from a group is to be particularly damning about work that might be considered part of a particular set. (And, conversely, to give thumbs ups to things one wouldn’t be expected to like.)

This risks damaging the criticism itself. Making the thumbs-up and thumbs-down the main feature, when really, much more often it should be seen as the annoying adverts before the event itself.

All of which is a circuitous way of getting round to saying, I’m not sure I particularly liked Sleepwalk Collective’s Actress, and had the odd reservation about Scenes for a Conversation after Viewing a Michael Haneke Film too. Having once been dubbed “the Kenneth Tynan of the Forst Fringe Generation” (by Chris Goode. He was taking the piss, don’t worry), the obvious thing to do would be to take this uncertainty and turn it into a copper-bottomed example of me not “following the herd”.

I now really want to see Actress again.
Posted by Andrew Haydon at 17:05

I wasn't, actually, taking the piss. Though I understand why you'd think so. But I meant it.