Neck of the Woods – HOME (as MIF), Manchester 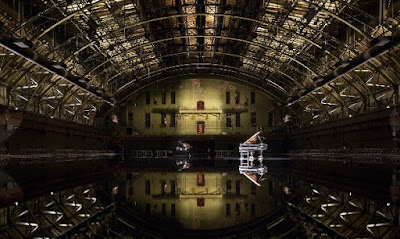 Neck of the Woods is 90 minutes long. It is a sort-of take on the Red Riding Hood story. It has been made by the visual artist Douglas Gordon, whose installation Silence, Exile, Deceit I loved so much at the Ruhr Triennale two years ago, with the pianist Hélène Grimaud, the actor Charlotte Rampling, writer Veronica Gonzalez Peña with the Sacred Sounds Women’s Choir. It could, as is clear from this stellar line-up, have gone one of two ways. Sadly, it went precisely the opposite way to the beautiful, haunting, ingenious Tree of Codes.

The most charitable way to look at Neck of the Woods, as it stands, is as a virtuosic piano recital during which some other things also happened. It would be wrong not to acknowledge that some other bits of that happened on were also ok – at the start and the end we sit in absolute darkness for a long time – you can’t see your hand in front of your face dark – and listen to a loud recording of someone chopping down a tree, breathing hard, and the tree eventually falling. That is very loud and suitably impressive. I think that’s pretty much it for good bits. No, Charlotte Rampling has an excellent voice. And actually, there’s a recording of Gordon reading some stuff too, and he too has a nice voice to listen to. Oh, and the choir at the back – revealed occasionally, waving about and, weirdly for a choir, not actually singing or anything – look nice.  And that is honestly about it for the good stuff.

The experience isn’t quite purgatorial – the piano playing is too good, and the visual stuff – what little there is of it – is perfectly pretty. The problem is the level at which it’s being shown and containing one’s irritation that it’s not just infinitely better. If this was the ambitious A-level piece that it theatrically resembles, I suspect it would get a decent enough mark, even though it is dramatically and intellectually inert. But seeing it at HOME as part of the MIF the impression is that no one who has the faintest idea how theatre works has been involved. Every element that gets added – from the darkness, to the barely lit pianist, to Charlotte Rampling’s demeanour of intense boredom, to the fake snow – each manages to detract further from the whole being watchable.

And it’s the piece’s poor fit *as theatre* that seems key here. I thought back to that installation, and, yes, granted, it did also benefit from being housed in a totally seductive space – an old abandoned steel works. I think I described the overall impression as like being *inside* a Nine Inch Nails video. And, I think this would also have worked well as an installation. Something that you could encounter *as Art*. The blurb for this show somewhere or other describes it as an encounter between fine art and theatre. This is true. But I think that once you put that encounter in the theatre, not in the gallery, and the audience are required to sit still and be quiet (unless you’re the Douglas Gordon who was sat in my row on press night and was neither still, nor quiet, and even noisily wandered out half way through – a glowing endorsement of his project), then the trajectory of that encounter needs A Lot More Work. Yes, curation in a gallery is an art too, but ultimately people can short-circuit it by walking round an exhibition backwards, half of it witrh their eyes closed, at different speeds, etc. In short, the gallery audience has the agency to change their relationship to the way that their time moves. In theatre no such option is even remotely possible.

Intriguingly, somewhere on the MIF site, the photo I've used as the "cover" for this post exists*. And I think that’s the version of this piece I’d have liked to have seen. Free coming and going. Choosing where you stand. Probably staying for an hour tops. Making your own discoveries and narratives. *Not* being pinned to a chair by people who don’t really understand the relationship of stage to audience.

*An American colleague notes: "the photo in your piece is of a different show (but also Gordon and Grimaud) at the Park Avenue armory in NYC. They opened it as an exhibition during the day but the performances were seated as you describe".

[Edit: this surprising story about D.G. taking an axe to HOME's lobby also deserves a permalink]
Posted by Andrew Haydon at 12:12