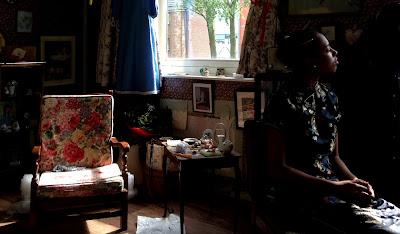 [I’ve hmm-ed and haa-ed about how to write this review, and decided, given the Very Short Run and the fact it was sold out, that Very Straight-Down-The-Line and Describe-y is the way to go.]

The Shrine of Everyday things takes place a short walk away from Contact on a social housing estate that is gradually being de-tenant-ed, and will then be knocked down to make way for a new, private flats.

On the walk from the theatre to the site, the audience wear radio-receiving headphones and listen first to some slow, post-rock music, overlaid with interviews with former residents of the estate talking about anything from their favourite rooms in their old homes to the reputation of the estate in the nineties, back when the cynical media name “Gunchester” was coined. The voices range from an elderly (Scottish?) woman to young black men. There’s a touching moment, given the probable gulf between their two lives, where both elderly woman and one young black man each conclude that the kitchen is their favourite room in their home, and recount anecdotes about nicking food on the sly.

As we near the estate, we first see the odd, lone balloon drift out of the window of one of the flats. Then our attention is caught by picture-perfect advert-style “residents”, standing on the lawn of the first of newly built blocks that are replacing the old estate, waving in slow motion at us. (It’s exactly like that advert for [I can’t remember what it was for] where a car drives slowly through an Americana-y suburb) The blurb for the piece suggests “David Lynch meets Coronation Street” and here they are already completely nailing that Blue Velvet weirdness. As we cross the road we notice a group of young people cycling out of the cemetery dressed in those ubiquitous animal onesies.

Along with these overtly thearical figures – the residents, the cycling human chimps – there are other people too. A youth leans against the wall of the estate staring at us. Is he part of the performance or a resident? There’s a group of young builders too. Are they part of it or actual builders?

There is always something that feels problematic about wandering into someone else’s unambiguously residential neighbourhood as a tourist. But aside from a few askance looks – we are, after all, a small crowd watching young people cycling round in onesies – no one seems very bothered. And the local children seem very taken with the proceedings, happily running around us and playing with members of the company.

It is also crucial that the theatre which commissioned the piece, Contact, is literally only three minutes from the estate, and has a massive, proven track record of attracting very local audiences as well as people from the pool of Greater Manchester Theatregoers. That the performers of this piece are members of that theatre’s Young Company. And that the directors are Rodolfo Amorim of the Brazilian theatre companies Grupo XIX de Teatro, Grupo Manto and Tablado de Arruar, and Manchester/Brazil-based artist Lowri Evans.

The result is great, thought-provoking, often beautiful art, made with and devised with young people who, clearly have a great sense of ownership over the material. A piece by, with and for the place, not one imposed on it.

The format of the piece quickly resolves into the audience who have walked over being sorted into four groups and led off to one of four flats. [I started in with number 47. It’s quite nice to watch knowing that the piece can be viewed in any order at all.] In the first flat (which I think was my favourite), three performers seem to play a series of couples who might have lived in the flat, or the same couple over various points in time. At several points a fourth performer, a neighbour, pops round and asks if he can borrow a cup of sugar, or if they can take his kids (a hobby horse and a Minion), or – back to the original plan – if he can borrow some sugar after all. The couple, switched with the beautiful, unexpected, simple device of having one performer go into the kitchen and another come out, both bicker and offer interior monologues. There’s a sense of thwarted romantic dreams, of mutual acceptance, of relationships gone cold, or routines adopted. And then one brings out tea for the other, and it’s a cup of sugar, then a cake – a plate of sugar – and so on. By the end of the section (maybe twenty minutes or fewer? It felt like about five) all three performers are all in the room, all standing, all speaking their ongoing internal thoughts, and tickles of sugar start pouring onto their heads from previously unseen holes in the ceiling. It is one of the best surprise moments of visual theatre I’ve seen in ages. Totally unexpected. Really simple. And, thanks to the way the piece has been made, hugely evocative of, well, of many things – it’s pretty open to interpretation. The Nouvelle Vague cover of ‘Love Will Tear Us Apart’ plays, and while I’d normally deplore the cliché, standing in a living room in an emptied council estate in Manchester, and after that particular performance, it feels apt, sweet, clever, and earned.

The second flat (pictured), offers a different sort of fragmentation, with several of the lines from the verbatim recordings we heard on the way over being woven into a surreal, Lynchian scene in which three women (played by young people, but as old women?), slightly off-kilter and maybe mildly sinister, like vampires or Gorgons in disguise, inhabit a room full of memories. At one point they’re all listening, glass-to-wall, to their neighbours, another moment they’re offering a charming rationale for the little porcelain ornaments (that each one reminds her of a very specific point in her life – it’s really rather hearkbreaking to imagine someone’s memories being invested in such fragile objects). At its end, a young lad burst into the room, being chased by the father of some kid he’s insulted. The weird sisters cover him in bubble wrap and lead him away for lord knows what sinister or benign purpose.

The third flat [I’m realising if I stick to the above level of painstaking detail we’re never going to finish] feels like almost n entirely different genre, from essentially drama theatre to interactive Live Art Lite – we enter the flat and are asked to write a memory of a dream on the wall in felt tip. Then we go into a “bedroom” (it’s the living room, but blacked-out and with a bed in it), and are asked to sit on the bed, get under a big sheet with our host, and tell each other things in response to questions: who read us bedtime stories? What book is next to our bed? Are we scared of the dark, etc. It’s kinda sweet and relaxing, and there’s some nice writing in what our host says. *Then* there’s a bit where we’re lying on our backs on the bed, and looking at the stars projected on the ceiling, and suddenly a ceiling tile is removed and a head pops up above us and starts off on a whole new monologue. As surprises go – the company have literally cut a hole in the ceiling of a room, after all – it’s quite a coup. And this performer too is very strong.

The fourth room – I should note the little holding bits in between that allow groups to experience each room at their own pace: these too are creative and fun, in one we’re required to drink tea from cups with holes in the bottom, in another someone is conducting an archaeological dig in the future unearthing the modern TVs and vacuum cleaners that could indeed end up buried when the estate is torn down – In the fourth room we first meet a bloke hoarding some rubbish in a cupboard in the flat’s hall (something to do with ecological thinking), and then a guy wading through a sea of bottles in an idiosyncratically decorated room (Man Utd wallpaper, self-adhesive pink plastic covering on the cupboards with pictures of pineapples on it – you kinda hope this was all added by the designers).

So, yes, myriad stuff, and somehow it all knits together to present something that feels at once, comforting, artistic, touching, political and angry. For me there was definitely oblique comment on the present politics of housing in Britain, and at the same time, enough optimism to get us from room to room without breeding murderous anti-government anger.

I *hate* outdoors theatre. There you go. It’s not a prejudice, I’ve seen it and frequently hated it. I don’t like standing outside watching theatre. Quite aside from the fact that we live in Britain, and so the likelihood is that it’ll be raining, I also like things like sitting down and lighting design.

But recently I also seem to keep seeing pieces of outdoor theatre that I adore. Because it doesn’t always rain. And because you can’t smoke indoors any more. And because, at its best, it’ll take you somewhere you’d never normally go, perhaps somewhere you have no business being otherwise, and will sometimes blow the artistry of the set designer and lighting designer out of the water just by making the real strange, accompanied by the weather Gods chucking in lighting effects that properly surprise you because they are almost entirely random.

The Shrine of Everyday Things is a remarkable piece of work. That it is also site-specific (yes, I mean specific) *and*: devised, and made with the Young Company, and led by international artists, and put in non-traditional theatre spaces, and a part of the community, all just adds to the feeling that this really is a very real part of the future of theatre.

[music from the show: