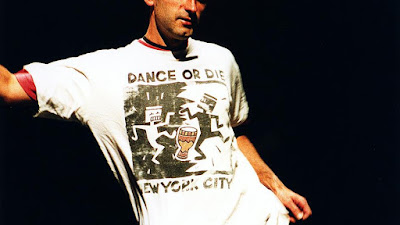 There’s a way of writing about “Live Art” that focuses on what we might called ‘the transformed individual’s response’. Megan Vaughan does it rather brilliantly, for example. Indeed, I’d say that it’s a genre of review which is fast becoming (has become?) the default for responses to a certain sort of performance.

Technically, Jérôme Bel is not a Live Artist. He is mostly filed under “choreographer” and “dance”; but, as we know, not all that much “dancing” or even *movement* necessarily happens in “dance” these days. And fair enough. That fight was won before I even turned up. And, apart from some residual cognitive dissonance at calling things-in-which-no-dancing-happens “dance”, I tend to think it’s a rather brilliant development. Not least because, well, there’s not as much to write about people moving around as there is to write about ideas.

Nevertheless, if writing about Live Art now focuses on individual experience and for the sake of this argument Bel is a live artist, what does the critic do when his experience of the piece is something like: mild pleasure; satisfaction; amusement; a sense of enjoying a simple idea executed well?

In Shirtology Jérôme Bel takes off t-shirts. He starts off wearing a thick wad of the things and one by one takes them off, pausing between each shirt so that we can admire its design. Once down to the last shirt, or skin, he goes and gets another set of t-shirts. Twice. This is almost the entirety of the show. It lasts around half an hour and is lovely, warm and droll. (My feelings that it was “lovely” and “warm” may proceed directly from the contrasting weather outside.)

Twice or three times Mr Bel also dances. Actual straight-up dancing. A couple of times he reads the t-shirts out for us, because the writing is too small, or faded, and because it’s funny. His doleful French accent hilariously contrasting with the bright, energetic logos on the shirt.

I *think* *really serious* analysis of the piece by someone with a mind less sluggish than mine currently is might yield all sorts of richness, but equally, there’s every chance that such a display would simply be uncovering pre-existing riches of an already fertile mind, rather than anything intrinsic to the show itself.

Yes, it plays with its own liveness, and with tension, and surprise, and all that stuff. Beautifully too. Imaginatively, you travel through worlds and possibilities with each t-shirt – things, places, things, astonishingly poor taste, everything you might find on a t-shirt, or in the interplay of words, colour and movement, in fact.

Did I manage to make a through-line through it? Reader, I did not. Blame Festival fatigue, blame a career of being raised on English concrete meanings instead of French jouissance. Blame whatever you like, but there it is. I just had a nice time watching the funny French man taking lots of t-shirts off. I wholeheartedly recommend it, but annoyingly I can’t begin to articulate why.

Ooh! A 17 minute version is online! Have a watch:

And, Googling further, I found a lovely Guide To... by Sanjoy Roy from a few years back, which seems to arrive at roughly the same place, but from a place of expertise, which was reassuring to read.
Posted by Andrew Haydon at 15:52