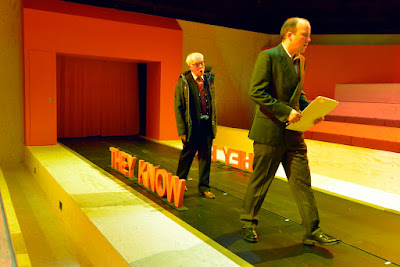 Oh, this is a bugger of a “review” to write.

As we know, I like Nick Gill and Nick Gill’s writing very much. My feelings about Richard Jones’s work are more mixed. I loved his Rodelinda at ENO (designed by Jeremy Herbert), and absolutely loathed his Enemy of the People at the Young Vic (designed by Miriam Buether, who also designs here). [And, yes; remarkably, that seems to be all I’ve seen of Jones’s prolific career – a shame, since I think I’d have liked a lot of his operas. Perhaps fewer of his theatre pieces.]

As such, you might feel disinclined to read what will doubtless be an attempt to extricate my mate’s play from what I thought was, in the main, *not the best possible production of his script*. So I’ll try to avoid that. Instead, there are a few *in principle* things that might be interesting to look at – primarily because they shouldn’t be mistaken for “in principle” things at all. For instance, the not-really-an-argument-anymore thing about directors and text is interesting. The published version of Gill’s script, for example, contains the following notes:

“K’s subvocal lines in italics are inaudible to anyone else.”

“There were no stage directions in the rehearsal script; they are present in the playtext for ease of reading and to reflect Richard Jones’s production.”

As I’ve argued a thousand times, a director is entirely free to ignore everything from an author’s stage directions onward. Even when, as here, there aren’t any. However, I’ve never argued that a director should use that freedom to make decisions which make the overall experience less good. (Yes, bright spark, “good” is indeed subjective. And I fully recognise that there will be people for whom this is the best imaginable production. And I’m both happy for them and envious. After all, yes/no reviewing is pretty drab, but sometimes “no” is the experience you have, and so you’re left with writing that tries to excavate why.) Actually, watching Richard Jones’s regietheater-goes-wrong production, I did wonder whether it might have saved time if I’d never argued any such thing.

The first vocal thing that happens in this production of Nick Gill’s The Trial is Rory Kinnear (K) pretty much bellows his way through that first *subvocal* italicised speech like he’s Henry V outside Harfleur. Well, well, it’s one approach, certainly. Do playwrights have a right to create material that the audience can’t hear? [Yes.] Not here, thinks Richard Jones. And, if we’re going to ignore the fact that we shouldn’t be able to hear K’s mutterings, was shouting them like they’re Shakespeare ever going to be the best way forward? Apparently so. I mean, really I should be standing on my seat and applauding the sheer “Fuck what the text wants me to do”-ness of it. And I would, if any of the decisions actually made the theatrical experience of the whole better. But, I really didn’t feel they did.

We can’t get much further without talking about Miriam Buether’s set, however. And again, like Jones’s directorial instincts, it’s slightly perplexing to me why I don’t like it. In theory, I really should. In theory it’s really good – a low conveyor belt in traverse staging, feeding into two monstrously ugly orange blocks at either end. And a big old rising ceiling (more orange. In the shape of a large Freudian keyhole. Possible readings range from Peeping Tom symbolism to a big old vagina) á la AVFTB. It might *even* be a really good set for something else, *as it is*. And I kind of thought that *maybe* if the acting, and costumes, and whole feel of the rest of the thing had been different, then maybe it’d have been ok here. In no way do I pretend to understand Buether and Jones’s Seventies shtick that seems a fixture in their Young Vic partnerings, but, well, it’s perplexing, isn’t it? Because surely Susanne Kennedy’s Warum Läuft Herr R. Amok? was no less Seventies-shticky, and yet that was one of the best things I’ve seen this year. But, for some reason B&J’s version of the 70s grates like polystyrene being caressed. Indeed, I dislike the design so much that I’m starting to wonder why I ever thought MB was any good. Sure, that wooden enclosure she made for Mike Bartlett’s Cock was good, but that feels like the last time that she an outright positive contribution, rather than something merely fine (don’t we all retrospectively wish Tom Scutt had done Earthquakes in London for example?), or something that actively worsened a production (Public Enemy). Yes, obviously period costumes would be *much worse*. And no one wants more of that Tim Burton crap that usually comes with revivials of Kafka. But, no; for me: wrong type of ugliness.

But really, how facile does this sound? I’m not big on the production because I don’t like the set or costumes, or the fact that Jones didn’t follow the stage directions? Well, partly, but mostly it’s something to do with Jones’s way of working with actors. I have no privileged insight and no particular knowledge here (I should make it abundantly clear as well that Nick and I haven’t had a single conversation before or after I saw the show about it – we do at least observe *some* professional niceties – so I have no idea what he thinks of it, or how involved he was in the staging, I’m just doing the maths based on other stuff of his I’ve seen tackled by other directors and other stuff of Jones’s). *Something* about whatever Jones does in the rehearsal room results in productions (well, two plays so far, the opera was super) that I just find straight-up difficult to get on with. Normally I find Rory Kinnear, Hugh Skinner and Kate O’Flynn incredibly watchable. Here, I think it was Richard Cant who I found myself most warming to, and him only in one of his two roles (there was also a person with a straggly wig he played which maybe have come under the wardrobe malfunction disconnect clause), while RK and co. all seemed to be somewhat below par (or, let’s be honest, just doing something that I clearly don’t get/get on with).

But, yes. Basically, I’d like another theatre to give this script to another director, and to go and see that production of this play instead of this one, which I didn’t like as much as the script deserves. You know how you see bad productions of Shakespeare. Think of it like that.

So, to answer Michael Billington’s worry (“Michael B found himself waiting for the evening to end... was the fault in him or in the concept of adapting The Trial?”), no, I don’t think it’s the script or the idea of doing The Trial. It’s the production (“visual bravura of Richard Jones as a director?” Wha?*). That can happen in theatre: bad productions of good scripts. Happens all the time.


*If you want to see visual bravura in a production of The Trial, this is what you want. (Bet the text of Nick’s adaptation was more interesting than that one, though.)
Posted by Andrew Haydon at 15:46