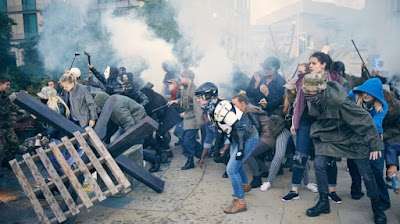 The best way to approach Slung Low’s Camelot: Shining City might be to mainline a lot of your favourite episodes of Doctor Who (the new ones with the whizzy music and effects) and remember how much fun nonsense can be. That’s not to say Camelot is just nonsense – it’s got learned references and philosophical ideas and everything – but first and foremost it’s a massive spectacle, with tonnes of extras running about (mostly outdoors), dressed as soldiers and riot police and rioters and proper machine-gun fire and explosions and flame-throwers and EVERYTHING.

I saw it on Saturday (in preview apparently, tho’ it didn’t show), and as Saturday Evening Telly, outdoors, LIVE!, with a sell-out audience consisting entirely of locals (of every age, ethnicity, disability, etc.) (so much more fun and genuine than the press night mix of critics and papered friends of the theatre, locked in an eternal stand-off) it felt like the best way of spending an evening imaginable.

What’s also absolutely wonderful, and fundamental to the show on a number of levels, is the sheer size and mix of the community volunteers who swell the ranks of the piece. Like the audience, the volunteers completely ran the gamut of race, age, disability, etc. so that what we – an audience who looked like UK society at large – were watching precisely mirrored us. Young, old, black, white, people with disabilities and without.

The meat of the piece is a modern re-telling of the King Arthur story(/ies). In it, Arthur becomes Bear(sp?), a mixed-race woman, and “Merlin” is the nick-name a college lecturer with a degenerative muscular disease. Elsewhere a “Dragon” turns out to be the names of a flame-throwing tank. Brilliant. Much else remains almost completely unaltered, though, with Lancelot and Galahad wielding swords and red crosses on white tabards.

In terms of story, the piece cleaves quite closely to a lot of Arthurian legend, particularly Malory. That throwaway bit where it’s revealed that our Bear’s General father raped her mother? That’s in the original. The whole separate factions and civil war thing that happens? That’s in there too. The somewhat barmy reasons *for* the civil war. Yup, all part and parcel of the whole King Arthur deal. What writer James Philips achieves here, for me, is reminding us that, contra the subsequent Disneyfication of the story, really the whole Knights of the Round Table thing is a tragedy of betrayal and civil war, first published the same year as the Battle of Bosworth Field.

Modernising the material has several effects. It reminds us, of course, that the Malory version was itself an adaptation of earlier versions of the stories, which added extra bits to fit the times for which it was written – a civil war for when England was in the grip of a civil war, for instance. It also makes us wonder about the morality of the original too. Is this stuff – of which airbrushed, white-washed versions have been held up as exemplary to us – not actually pretty questionable from the get-go? Or, is it the white-washing of the complexity that has been the problem?

An effect of staging this version now is both situating modern Britain as a country on the verge of a civil war, which feels pretty much plausible, and at the same time – regrettably, if sensibly – counselling against revolution.

Bear’s post-Occupy-style military coup, with its colourful melange of symbols *is*, on one level, just so much sci-fi, but at the same time, while respecting the source material, definitely worth thinking about as a comment on where we might be headed today. A populism of vague ideas and platitudes and a radicalised version of the same, with strict adherence to the literal versions of attractive slogans are both shown up to be deeply problematic. Probably correctly, although I’d have been just as up for watching a live-action how-to guide to armed revolution.

In a way, this might even the reason for this counter-revolutionary pageant. A reminder that it’s maybe a bit easy, the piece suggests, to get carried away with wanting to arm the poor and machine gun The Establishment. But ultimately, does doing that ever work, are the governments that follow revolutions ever an improvement? they ask. It’s actually a properly difficult question that they articulate, and offer nothing by way of an answer (I’m not proposing that they should).

But, still, yes, in amongst all the fun, and explosions, and Dr Who-ness, there is stuff to think about beyond the nonsense, should you wish to. I daresay hundreds won’t, though, and will still have a brilliant evening out with a great story and spectacle.
Posted by Andrew Haydon at 14:25