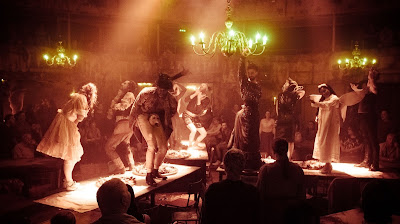 It’s a funny world where a 21-year-old play about an ancient faerie feels infinitely more relevant, timely, and urgent than a brand new thing about the internet, but that’s preciselty the neat trick that Sarah Frankcom’s production of Caryl Churchill’s The Skriker pulls off.

And, Christ, what a production it is. I’m not usually one to be wowed by a big budget (I’m assuming there was more money on the table than the Royal Exchange usually have to play with), but, Jesus, when it’s spent like this, it feels more like a brilliant, wise, generous investment in Art and culture, than frivolity or ostentation. Yes, I suspect more than half of what’s achieved here *could* have been done in “own clothes” in a plain black box with the same configuration – in the Royal Exchange’s always-strange, marooned glass-tardis thing, the stage-level seating has been ripped out, and the audience sit at tables; action happens all around them. But Lizzie Clachan’s design not only enhances this use of the space, it adds a whole extra level of interpretation and dramaturgy to the thing.

The stage level has been completely transformed. The glass box itself has been put as if under one of those parrot-cage “night-time” covers, so full blackout can be achieved (hallelujah!). But more crucially, in the spaces where banks of audience usually sit, Clachan has created little low-ceilinged, damp-infested rooms, flanked with the concrete of the Sixties brutalist estate gone to seed. It’s even a tribute to the design’s brilliance, that this interpretation – that it’s a “sink estate” – only occurred to me when it became relevant. Before that, its faintly futuristic, faintly anywhen atmosphere evoked precisely the fairyland or secure mental health institution in which the action might be taking place. Oh, and fuck me, the lighting (Jack Knowles) is brilliant too. And there’s so much of it. Hyperactive, effective, dividing space, picking out single figures, splashing colour across scenes or reducing the entire auditorium to a monochrome. Yeah. If everything else wasn’t also awesome, I reckon it’d still be worth seeing just the for the lighting design.

But everything else *is* awesome too.

It turns out that The Skriker is Caryl Churchill’s This Is How We Die. Or, put another way; in her no-two-plays-the-same, no-play-like-the-last oeuvre, this is Caryl Churchill’s Elfriede Jelinek moment. Compulsive wordplay and punning, machine-gun oratory, a fighting, tumbling babble of violent, sinister language screaming forth from the mouth of some ancient, malevolent pixie like a curse. And, bloody hell, Maxine Peake earns every last drop of the high esteem in which she’s held by Manchester delivering it. This is the bravura performance that everyone was hoping for, and, well, here it is delivered by the truckload. Mercurial, intense, frightening, ceaselessly inventive and relentless.

There is a plot too, I think. It’s gloriously elliptical, making us pick and scramble through the play, as – while seating amongst the action – we twist and turn in our chairs, picking out what to look at from the 360° rush of living images around us. (And, dear reader, I normally *hate* being this close to the action. Here it feels like an absolute privilege and a joy.) The plot is about this vicious faerie I think trying to steal children, or make their mothers murder them, or establish some sort of familial foothold in the real world. In this, and not only visually, it recalls both Silviu Purcărete’s Faust, but also Peter Harness’s excellent BBC adaptation of Mr Norrell and Jonathan Strange.

Because of this, it feels like there’s something weirdly contemporary about “English Magic”. Just as there is about The Greeks at the moment. And if, as Dan Rebellato convincingly argues in that linked piece, the attraction of the Greeks as dramatists is “austerity in the sense of unadorned severity. There is something austere that we can find in those plays. Stripped of the fuss of naturalism, the flinty poetry of the work presents a series of archetypal conflicts” then I wonder if the attraction of “English Magic” as a subject is perhaps the opposite. A kind of weird, fulsome, subversive, rich metaphor for something troubling and uncontained. I don’t really want to pin this metaphor down. I think, actually, that it exists on several levels at the same time. On one level, the sheer malice of this Skriker creature, attacking the mentally ill, feeding on the misfortune of those at the bottom of the social food chain... Well, you’d have to be pretty right-wing not to see what that might be seen as a metaphor for. At the same time, that spirit of home-grown anarchy, something as intrinsically English as the soil here, that perhaps speaks to a troublingly nationalist vision of some sort of essential Englishness (in which I do not believe – soil-praise is about as reactionary as it gets), which is at least familiar as an idea. Landscapes, are, after all, something that feel like they become a part of us? So yes, it’s a play about “underclass” women fighting both the Tories and Manchester’s nationalist rain? No. But somehow, at the same time, yes. It feels somehow as atavistic and real as King Lear or Mojmír II. Alebo Súmrak Ríše, at once a hurtle through history and a fight with the contemporary.

So, yes. It feels like this incredibly rich tapestry of ideas and folklore and social thinking and commentary smashed into a blender and poured out as one of the most exciting theatrical events I’ve seen in a UK theatre. There is something joyous about the excess here, especially in times of “austerity”. I’ve already written about how admirable the sense that the Royal Exchange is owned by the people of Manchester is. And when this is the case, luxury productions like this feel like a lavish gift. That there’s a massive feast scene, swelled with a choir and music by Nico Muhly and Anthony too... Oh, it’s just great. “Difficult” theatre, beautifully served, and offered in the best faith imaginable. It feels how I wish every single thing I ever saw in a theatre felt. Brilliant.
Posted by Andrew Haydon at 12:53

Glad you found so much in it. The main thought it provoked in me was: "How quickly can I get away from this shouty mess?" The second was: "Could they not at least give us an interval to reflect on all this faerie frothing?" The third was: "How is it that a sublime actor and an esteemed director could drop this on us after the power and beauty of 2013's Peterloo brilliance?"