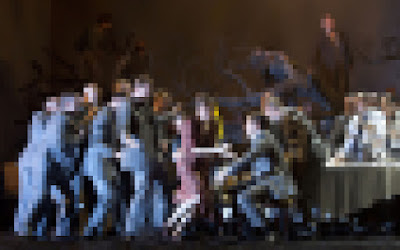 So, to recap: the audience of the Royal Opera House booed a scene in Damiano Michieletto’s new production of Rossini’s opera Guillaume Tell in which a woman is stripped naked and gang-raped. The scene is a version – in extremis – of what happens in the original (1829), based on the play of the same name by Fredrich Schiller written in 1804.

There have been many op-ed pieces written, and I haven’t seen one that I agree with, so I’ve written my own. No, I haven’t seen the production and wasn’t there when everyone booed the scene. Neither was anyone else who’s offered an opinion on the subject, as far as I’ve seen. But that doesn’t matter, as this is an op-ed about op-eds, not a review.

The main problem I have with all the other op-ed pieces is the way that they seem to “know” why “a crowd” booed. They don’t. There are even pieces decrying them for their reason for booing (which the pieces’ authors cannot hope to know). I’m not even convinced everyone in the audience who booed will have done so for the same reason as their neighbour.

Anyway, here are the two ways the thing can be seen:

2) A feminist audience objects to the invention of a rape to make a point.

The booing itself is immaterial. We don’t know why they booed (and we certainly don’t know why it was reported, and with such gusto). The insoluable question is this: war is hell. William Tell tells the story of the brutal occupation of Switzerland by the Habsburgs in the 14th century and their war of independence. Michieletto’s production apparently updates this occupation to the wars in ex-Yugoslavia in the 1990s. Women are raped in wars as a particularly disgusting way of brutalising and demoralising the enemy. Men use rape as a way of making a point. Here a male director recreates precisely this tactic to make his own point.

So the real question here (let’s forget about reactionary audiences, imaginary or not) is: is this staged rape a symptom of a misogynist staging, or a clear-eyed, forensic depiction of a misogynist world – fighting against both staging conventions of the 1800s and the polite euphemising and white-washing of war's actual horrors?

There isn’t a right answer here. It can definitely be both. If something exists in the world, art has to find a way of talking about it. At the same time, if that thing is the ongoing subjugation of women by rape (in warfare or otherwise), then is simply reproducing a crude facsimile of what rape looks like good enough? Or is the brutal shock value of that worth something? One thinks of that scene in Carrie Cracknell’s Blurred Lines where Nicholas Hytner defends his staging of the murder of Desdemona in her underwear.

But, even assuming unimpeachable motives, there is no correct answer. One man’s necessary, unsentimental, realistic picture of the horrors of war is another woman’s unacceptable exploitation of the female body on stage, and vice versa (re: the genders of the opinion holders).

My view: sure, if opera audiences just boo something just because it’s modern, fuck ‘em. (And does *anyone* really think like that?) But this wasn’t just modern, it was also a(nother) depiction of a woman being raped, and I’m not sure that naturalistic representations of rape in C21st are modern at all. Howard Brenton’s The Romans in Britain (1983) had the wit to create a similar scene, but using a young man as the rape victim. And that was over thirty years ago.