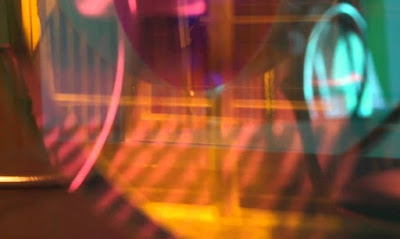 Tree of Codes is a spectacular piece of work. I watched several minutes of it with my jaw actually dropped, and much of the rest with a stupid grin plastered all over my face. I also watched most of of it with my synapses whizzing. I have no idea what anyone else thinks about when watching abstract performance. I think about how the hell I’m going to write about it. I never take notes *during*, so maybe part of watching is also an act of memorising.

And how I think I should write about Tree of Codes is by I guess talking about information...

The choreography is by Wayne McGregor (whose work I’ve (criminally) never seen before), the “visual concept” is by Olafur Eliasson, and the music is by Jamie XX (from The XX, who I was also listening to a lot around the same time I saw an O.E. exhibition in Berlin). And it’s possibly the best example of this sort of “random Art supergroup” collaboration that I’ve ever seen. (At least since the last Gisele Vienne, anyway.)

What’s interesting is how distinct each of the collaborators’ work is. The music, light/stuff and choreography are all fairly recognisably separate.  At the same time, each element seems to be rather beautifully attuned to what the other two elements are up to. Each element could, I think stand up on their own. The music you could quite happily listen to on its own. The visual stuff could equally work in a gallery setting, with visitors providing the interactivity needed to show off what’s happening, and the dance could easily be performed in a naturally lit white-box rehearsal studio and still be sublime. But, with the addition of each aspect to the other, the effect is almost, at times, overpowering (in the best possible way).

Not knowing the first thing about what’s been adapted is always interesting. I (obviously) can’t say anything about how what I saw relates to what’s in the book, or even what that book’s relationship to its original is. But I do love that the response to the book is essentially entirely abstract. As with Cassellucci’s Doctor Faustus, I am suddenly a big fan of people making an incredibly *realised* piece of art and it having the title of another work of art, and it being an adaptation into another medium, rather than “a response to” (as we more often tend to call them here).

In terms of action, well, I’m pretty hopeless at writing about long dance pieces. This is in the vague are of “contemporary ballet”, rather than “contemporary dance”. If it reminded me of anything, it was of Alain Platel’s For Pina, but with the jagged edges and fragments transformed into fluidity and grace.

But, in a funny way (and perhaps what irritated the “proper” dance critics), is that the dance is only one part of this story. Olafur Eliasson’s lighting is kinetic, clever, and frequently disconcerting in its ability to make you spend minutes getting your head around what he’s done. Like the Weather Project, and, more so, the exhibition in Berlin, it plays on coloured lights and mirrors. Coloured lights are shone through filters on stage – at once stage a whole extra pros.arch sized gel is lowered, at another point, a two-way mirror, which could also tilt on its massive axis. All this has the effect of showing the dancers in prisms, muliple reflections or just single ones, different coloured images of the same reflection. Different lighting from different angles, and strange sun/moon-like spotlights/searchlights playing over the stage or the auditorium and audience, sometimes creating mirror images of those too, at the back of the stage. As an effect, this last particularly seems to have the clever result of making the piece feel not only about itself, but also about its being watched, and about everyone in the room that we’re in.

But, also, like the Skriker, this again felt like a really lovely present to the people of Manchester (low-waged tickets £12, which is pretty bloody good – better, indeed, than Travelex’s offer to *anyone*). And, best of all, even off the back of these slightly snotty reviews from *experts*, it has completely sold out every last ticket on word of mouth. Everyone I’ve talked to absolutely loved it. If I’m completely honest, my mind wandered for about ten minutes at about fifty minutes in, but then came right back after five or so minutes away. And, at the curtain call I was somehow feeling at once elated and completely spaced-out. If you go with literally no preconceived idea of what you’re going to at all, and just look at it, and think about it, and listen to it, and let it do its thing I think you’d have to have a soul made of pedantry and *really specialist objections* not to just adore it.

I think I first heard about Tree of Codes at some point after I’d heard about the rest of the Manchester International Festival programme. Or rather, after I’d heard about everything in the MIF *theatre* programme. My eyes had probably skimmed over the words, which held no especial meaning for me. I might even have thought, “hmm, that’s not a terribly prepossessing title. Bloody hippies.”

Obviously I have a tonne of residual love for Olafur Eliasson. I think everyone who saw his Weather Project at the Tate Modern does. Indeed, two years ago (31.10.13), I posted this photo on Facebook with the comment: “It's not often I miss a work of art, but I bloody miss this”: 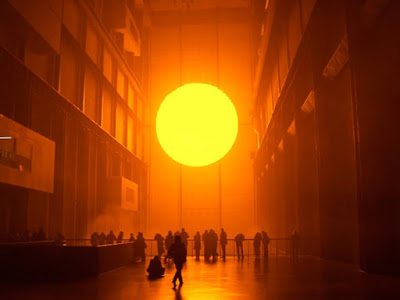 And, ha! – I promise I’d forgotten this – my second comment, in reply to something Ramin Gray said, is: “You should get the guy to design a set/lighting for you. I saw a later exhibition of his stuff in Berlin and he's all about the clever lights...”. More on the Berlin exhibition later [earlier].

Having established I was quite keen to see it, I whizzed off emails the the press office people, who weren’t sure whether there’d be tickets (I couldn’t do press night because London, and being backed up on other MIF openings and etc.) So, not knowing if I’d go, I did catch the headline, standfirst and star-rating of Luke Jennings’s review for the Observer (“ALL ACTION AND NO CONSEQUENCE – It looks awesome, but Wayne McGregor’s adaptation of a Jonathan Safran Foer novel contains none of its source’s poetry – three stars”). This kind of dampened my urge to see it.

Happily, though, I got into a chat on Twitter about it and I totally owe Megan Marie Griffith (who I don’t know at all) one for saying: “Tree of Codes is INCREDIBLE!I was nearly crying for the 1st 20 mins just because it's so stunning!” Someone else went on to say they’d had the most intense physical reaction to it since This is How We Die. An immediate conclusion we should draw from this is that like-minded folk on Twitter a damn sight more useful than “experts”. Three stars, indeed. Pfft.

Nevertheless, (thanks partly to misremembering the tweet as “I cried for all 120 minutes – no mean achievement in a show which only last 75 minutes) my expectations had been ridiculously raised. Which isn’t always helpful. Here I was – press ticket confirmed for Thursday eve – *really* looking forward to something I still knew next to nothing about.

And I’d still done no background reading. And had all but forgotten Luke Jennings’s reference to Jonathan Safran Foer.

So, Thursday evening arrives. I’ve had a lovely day generally. The sun is shining. The walk to the venue from my flat is all of about fifteen minutes. The crowd outside is somehow just pleasing in itself – seemingly all ages, colours, and classes have come along (not altogether surprising when there are £12 tickets available for any low-waged residents of Greater Manchester – God bless this Festival).

Then, just before it starts – there was a lot of time to kill between the 20.00 advertised start time, and the 20.18 *actual* start time, I have a tiny look at the programme notes by Sarah Crompton, which explain that Jonathan Safran Foer’s Tree of Codes is a novel, or artwork, or poem, made out of his favourite book, Bruno Schulz’s The Street of Crocodiles. So actually, really, it should be called ___ _tree_ of ___cod__es. Which I love. And obviously I wish I’d read (both).

This also sets me off thinking how I also wish I’d seen Complicité’s Street of Crocodiles. And, now, writing this, how cool it would have been for this performance to have been a cut-up version of that. But anyway...

So, what’s the sodding thing like? I imagine you’re thinking...

[return to start of cut and paste]