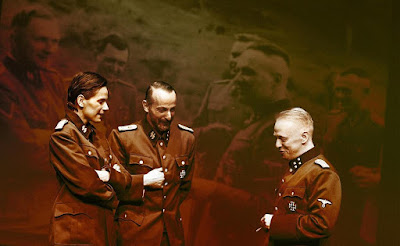 Paul Bargetto and Teatr Trans-Atlantyk’s Album Karl Höcker is presented as a work in progress, or shown within the frame of a “work-in-progress”. It takes it’s title from the fact that in 1944, 33-year-old SS Obersturmfürher (First Lieutenant) Karl-Friedrich Höcker was appointed to the post of Adjutant to the Camp Commandant, at Auschwitz 1. He took a camera with him and made 116 photographs of his time there.

The photographs mostly depict the day-to-day off-duty life of those in charge at the camp. Pictures are often posed group shots of men and women laughing. Top buttons are undone. There’s not so much stiff formality in many of them. Apart from the uniforms, they could be any group of young people mucking about in so many of the pictures. Here’s one. Look at it. Remember it’s Auschwitz. Look at it. 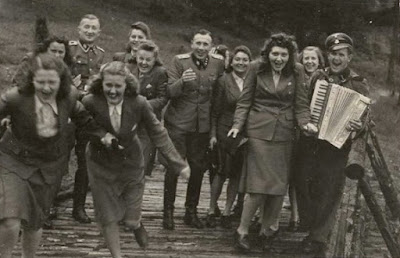 The concept of the piece is very straightforward. Five actors (two women, five men) workshop “recreating” the photographs. They also create improvisations, ask each other biographical questions about the people in the photographs, and sometimes try to imagine their interior monologues.

Since Hannah Arendt’s Eichmann in Jerusalem: a report on the banality of evil, and doubtless before, one fascination with the Nazis has been the almost unbearable fact that the people who murdered nearly seventy per cent of Europe’s Jewish population (90% of Poland’s) were also people that ate breakfast, laughed, sunbathed, and took goofy photographs in the rain. That they are not somehow entirely different to us in every respect is the hardest thing to take. That in photographs like this they are neither monsters nor hollowed out traumatised shells of people.

What is brilliant about this piece is the way that, like the photographs that it examines, it hardly ever mentions the reality of Auschwitz. I imagine some people might dissent from this decision, but it feels like the facts of Auschwitz are facts that we all know; that they aren’t made any stronger than their repetition; that they’re facts we all know, and, more importantly, have to remember. And have to remember especially while watching this piece, while watching Hoess and Mengele ‘aving a laugh about some now reimagined joke. Frowning about some long-forgotten trivial dispute over some minutiae or other at dinner.

It’s now a week since I saw this piece [the above was written the next day], and on one hand it’s something that I’ve thought about countless times since, and at the same time, I don’t think I remember a single thing that anyone said while on stage. There was a bit where Menegele is imagined losing it at the accusations made against him afterwards. There is a bit where one of the cast – playing herself – refuses to give a Nazi salute, while nevertheless wearing the uniform (“we all have our own boundaries” someone might have said), but, if anything, while also powerful moments – and freely admitting that I know nothing about dramaturgy, or how the piece would feel without these moments – these were the moments that I found most unnecessary. (Those and the photos at the end of the cast doing research at the site of Auschwitz.)

The genius of the rest of the thing is the sheer horror of tackling the banality, the normality, the absolutely trivial maybe love affairs, and affection for pets, and outings to a coal mine, that these photos document.

The beyond-depressing truth that the piece seems to unfold is that *anyone* could have done what was done at Auschwitz. It was carried out by people like you or I. Because of orders, and cowardice, perhaps, in the best cases (and, Jesus, what a world where that is the best case), but carried out nevertheless, by people making the best of a bad job. Or, worse, with pride. By people who seem no different to us. This is powerful precisely because it almost refuses to believe it itself. Remarkable, overpowering, dreadful theatre. It sort of sits inside you afterwards and, like history, and fact, doesn’t really go away. It doesn’t have anywhere to go. It’s just an ongoing reality we all have to live with now: this is a thing people can do. 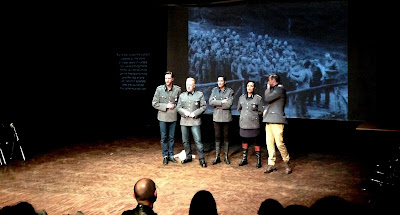