A Night at the Theatre – Royal Exchange, Manchester 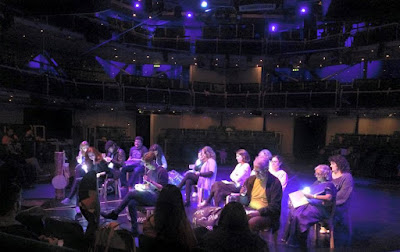 A Night at the Theatre isn’t the name of a show. Last Friday night, Manchester Royal Exchange actually held a sleep-over for a hundred people who self-nominated themselves as Royal Exchange audience members. It had a make-yourself-as-a-puppet section, a chat-about-theatre section, a newly commissioned lullaby performed by a choir of fifty, a section where many attendees read out a short story about their memories of theatre, and a bedtime story written by Royal Exchange Associate Artist Chris Thorpe read out by Royal Exchange Associate Artist Maxine Peake. And then there were Ghost Tours of the building led by the resident cast of The Ghost Train. And they gave everyone cocoa at night and a bacon sandwich in the morning.

And it’s kind of impossible to describe just how stupidly moving the whole thing was. Ok, let’s be honest, puppet-making didn’t have me in floods, although I was surprised and charmed by Johnny Woodhams’s workshop, other people’s puppets, and even my own stabs at the whole Blue Peter bit. It was also a good ice-breaker.

After that, I was on a panel offering something between “Provocations” and “My Royal Exchange” ideas. I was definitely least good. But Sarah Frankcom and Lyn Gardner were both very good indeed, while Yandass Ndlovu and Brenda Hickey, from the Exchange’s Young Company and Company of Elders respectively, were even better. This flowed into something a bit like a Devoted and Disgruntled’s Open Space discussions, albeit with tables as well as chairs, and questions already set out.

It was, particularly great to find myself on a table nominally discussing the suggestion that [exact form-of-words coming soon] and having my suspicion that, in fact, “normal” people aren’t greatly troubled at all by conversations theatremakers and critics have with other theatremakers and other critics. They’re theatregoers, not anally-retentive trainspotters, after all. They’re not, it seems fair to say, particularly concerned whether something is New Writing or devised. Or if the director’s interpretation of a text is painstakingly literal-minded or interpretative. They mind if it’s any good or not.

[At which point, individual tastes come into play, infinitely more than any categorisations of theatre that funders, critics, or academics might find useful when trying to talk about it. Some audiences like The Smiths or Joy Division, or the Stone Roses, others don’t. I’d say they were all good. Other people wouldn’t. I would say that all three bands have indisputably got a hell of a lot more fans now than when they started, and were *experimental*, *weird*, and *indie*, though, even though the actual music hasn’t changed at all.]

As a result of the fact that the conversations that [form of words coming] hadn’t alienated any of the people at the table nearly as much as the assumptions in the question itself, we instead ended up discussing the question of whether people felt “represented” at the theatre. Which was an interesting question to think about. Especially the night after The Funfair and, as it turned out, the night before A Nation’s Theatre. The conversation was heartening. One woman on our table – Scottish and working-class – said she was definitely aware of plays that depicted the working-class Scotland she’d grown up in, characterised by violence against women by drunk patriarchal heads of families. “That was how it was,” she said. She didn’t say whether these plays were her favourite plays ever, or feeling “represented” in that way was what she wanted most of all.

Another take on the same question came from Ndlovu on the panel, who, having spoken brilliantly on how being part of the Young Company had definitely drawn her away from “being naughty” (an understatement, she hinted), what had amazed her was seeing characters like herself represented instead of all theatre being all “Consider yourself...”. Which was the best and funniest thing skewering of The Musical’s alleged universality I’d ever heard.

So, on one level, we see that, yes, of course theatre can make people feel represented and included, and at the same time, that traditional thinking on what constitutes universality can also be amusingly flawed. Moreover, Ndlovu wasn’t saying she didn’t like Oliver!, but at the same time, she wasn’t saying it said much to her about the specifics of her life. Opening up the revolutionary possibility that things need not be *about* an audience member for that audience member to enjoy it. And, equally, shows which could be held to offer “universal” messages or narratives can have that universality entirely swallowed up by specifics.

After the discussion was Jason Singh’s new “lullaby” performed by the composer and the Sacred Sounds Choir. If the Royal Exchange has one massive advantage over almost every other theatre I’ve ever been to, it’s its architecture. If you’ve never been there, it’s this palatial hall, and in the centre – entirely unrelated to its surroundings – the theatre is a kind of octagonal glass refugee from 80s Dr Who. But, yeah, that hall. People love it. And, it echoes like mad. So sticking a massive choir all around it, and putting on some pretty lights = winning. The music itself was also rather lovely, and more “difficult” and textured than the word “lullaby” might lead you to expect, while remaining pretty, charming and musical at the same time.

Following the choir was the bit where people read out their own stories about going to the theatre. And, Christ it was moving. Regular readers will know I tend to disapprove of sentimentality, but, Christ, I ain’t half sentimental. The stories, I should emphasise, *weren’t* sentimental at all. They were just clear, concise, charming, robust, often very funny, or moving accounts of some people going to theatre. And maybe it was just the hour, or the sheer range of people there, or the conversations we’d been having, or the fierce love/fond memories that these people had for the artform, but blimey. One woman talked about someone singing ‘Amazing Grace’ in prison and getting a whole chapel full of prisoners weeping, one older Indian lady talked about her erstwhile stage career and an amusing anecdote about her wig flying off, and a ten-year-old with the smallest voice imaginable told us a lovely story about her dad and a cat in a theatre.

To round off the evening (at least before everyone got ready for bed and the ghost tours) there was Chris Thorpe’s bedtime story. I was tempted at the time to write a whole plot-spoilering, blow-by-blow analytical review of the thing, because it was genuinely, genuinely brilliant. And Maxine Peake read it about as well as perfectly as it;s possible to imagine. And it was basically a fable about a horse with a golden tail (which could feed everyone forever) killing George Osborne (well, it might as well have been) with his own greed and meanness-of-spirit (although at not point did it actually say so). Which is what all fables/bedtime stories should say.

So, yes, Jesus. That was all in all one of the best, most uplifting, joyous, thought-provoking, moving nights I’d had in a theatre in a bloody long time. It confirmed just about every cliché going about “reminding us why we do it” (or write about it, or just love it and keep going to it), and I didn’t mind a bit. There was something particularly special about the relationship that the Royal Exchange seemed to have with its audience and the care and respect with which it treated them. Properly remarkable, special stuff. 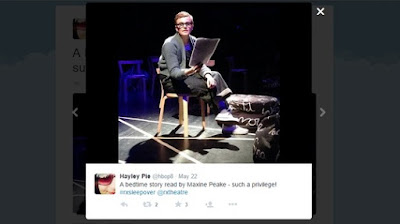 (Lyn Gardner has also written a lovely piece about the same thing here)
Posted by Andrew Haydon at 19:52

Such a brilliant evening loved it. Even created a little video: https://www.youtube.com/watch?v=26u80rt1wd0