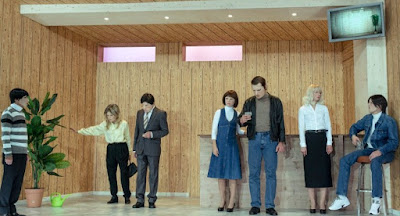 Warum Läuft Herr R. Amok? is one of the most remarkable things I’ve ever seen in a theatre. And I have absolutely no idea how to explain how or why. Even to myself.

The cumulative effect by the end is a real visceral sense of, what? Rage? Release? Catharsis? You’ve essentially been tipped into the head of a man who loses his mind and murders his wife, child and neighbour. And, in a really worrying way, you’re kind of right there with him when he does it.

To get to this point, you’ve been sitting in the theatre for the last two hours watching what in theory is some of the most deadpan-to-the-point-of-tedious theatre you’ve ever seen. So much so, that it’s even quite funny for a while. But you soon stop laughing. Some of the catharsis of the end is simply relief that the play has stopped making you watch it.

The show opens in a slightly false perspective light wooden room. There’s a counter with a pile of CDs on it, two bored looking women, and a bloke. All the performers are wearing see-thru plastic masks and very acrylic wigs. All their clothes look brand new: ironed jeans, box fresh trainers, uncreased sweaters. They look – and move – like human showroom dummies. Some interminable lift music is playing, maybe. Everything looks too bright. Kitschy. Maybe late seventies or early eighties. It’s not overdone. It doesn’t quite grate. It’s just bland to the point of cheerful nothingness, with the added uncanny effect of the plastic masks.

A man is asking the saleswomen is they know a song that he heard on the radio last week. He can’t remember the title. He can’t remember much about it, to be honest. The information he offers is comically useless. In over-precise terms he describes what could be almost any pop song ever. But it’s also like a nightmare. You know that sensation when you can’t stop hearing a song, but all you can explain is a tuneless “Deee, dah dah”. That. Perfectly.

On one level it’s like the whole piece is daring us to keep watching at all. On another level, though, it’s genuinely fascinating (and funny, and entertaining and compellingly watchable). I don’t think until this show I’ve ever really got what anyone might mean by “alienation technique” (bad translation of V-effekt, I know) or how it would work. But, well, this is pretty alienating, and it really does have a brilliant effect on how you watch and think about what you’re watching.

In between each scene a screen lowers and we see a video of another room, almost identical to the one facing the auditorium, in which usually nothing happens at all. Sometimes the music/ambient noise of the previous scene will continue, sometimes not. Sometimes new music or ambient noise will be introduced. Sometimes that will carry over into the next “live” scene. Sometimes not. Sometimes a person – always a senior citizen – will walk into the videoed room. These sections end with the location of the next scene in eighties computer writing projected onto the screen.

The question of the title is pretty easily answered: because capitalism. Or, more precisely: because everything in the life of Herr R. (pronounced in German “R” is “air”, so it rhymes with Herr) seems designed to be grating, irritating to the point where he snaps. If anything, the real question of the piece isn’t: why does Herr R go mad? But: why isn’t everybody going mad?

The piece is based on the script of a film by Rainer Maria Fassbinder, and it’s not without its problems. While Herr R. is obviously a blank and a bit of a bore, his wife and female neighbour are pretty much cartoon harpies of social climbing, and one could wonder about how much of that is to do with hating capitalism, and how much just to do with hating women. Similarly, there’s a scene with his son, whose main crime against Herr R. seems to be having a speech defect (unable to say “sch” without whistling). Here the sympathy of the audience’s laughter is ambiguous. There’s also a sense that the piece might indulge that problematic “artist’s version” of “everyday life”, which never quite resolves that line between concern and condescension – that sense of: “how do ‘ordinary people’ put up with it all?” All that said, I don’t think there’s much here in the day to day exchanges that won’t be familiar to everyone. Small exchanges where someone else aims to demonstrate their superiority to you, perhaps based on value systems about which you don’t even care, small set-backs, failed attempts at camaraderie, feeling betrayed by a partner’s social climbing. In a way it’s an achingly slow, German, art-house The Office, or an anti-capitalism American Beauty.

Herr R.’s attempt to buy this record that’s become an earworm is a recurring motif throughout the piece. At one stage a looped intro to Kylie’s Can’t Get You Out of My Head plays throughout one scene for what also feels like an eternity. As the piece progresses Herr R. gets closer to finding out what the song is. It turns out (here) to be Let it Grow by Eric Clapton. Albeit, for a really long time, just a loop of the few bars starting roughly at 2.00 and cutting out before the vocals happen. It’s a brilliant use of music. Everything from its era, its stirring-but-bullshit hippy promises, even the melodic structure of mounting force and somehow sense-of-yearning. It paints a completely plausible picture of the inside of Herr R.’s mind. And the way that all we hear for just ages is a loop echoes both the nature of an ohrwurm and the cyclical, recursive life Herr R. is living.

Just after (or just before?) Herr R. snaps, and does his family in by smashing their heads in with a garden gnome (brilliant! The pathos!), we have a scene where we actually do hear at least half the full song (I reckon from 2.00 onwards). One of the senior women from the room-on-video comes into the audience-facing-room and does a ludicrously sexy dance along with it. Then, in the next(?) scene the familiar plastic-faced cast in the office setting have been replaced by the senior citizens from the video room. The hideous plastic-faced dream-logic of the whole thing thus far is abruptly shattered. Maybe they even speak with their real voices. Weirdly (perhaps because of surtitles already putting me at one remove?) I didn’t notice/don’t remember.

But, yes. Somehow it’s impossible to communicate precisely how much a rush the end of the show gives you. I mean, I think it is to do with the way that you’re relieved that it’s over. But also it’s amazement at the completeness and beautiful realisation of such a completely alien aesthetic.

For me, this felt like about the most unequivocal attack on capitalism/Western life that I can think of. Without ever doing more than, well, than demonstrating alienated labour by showing us the most distorted, alienated, alienating vision of it imaginable. And its effect on people writ large.

It’s cleverer than I’ve just made it sound. And harder to watch. And more satisfying. And more mad, inexplicable, and visceral. Yeah. I don’t really have the words, but, blimey. Warum Läuft Herr R. Amok? is stunning.

Listen (from 2.00) until you can’t dislodge from your mind:

Oh, and YouTube has the original film! (Italian subtitles, unhelpfully):