He Had Hairy Hands – Lowry, Salford 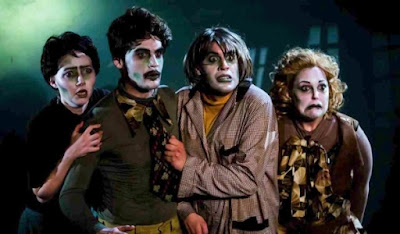 There’s a fun maxim in theatre criticism that you should “report the event”. The thinking, I guess, being that the crackle of stage electricity needs to be reported, rather than just a precis of plot and checklist of cast and scenery that’ll hold good from night to night, and even from venue to venue. On the whole, I think we critics tend to flunk this challenge, not least because the events upon which we are invited to attended are press nights, which, at least in London, tend to be gala affairs where twenty or thirty press are deliberately outnumbered by anything up to 1,500 papered house seats occupied by friends, family, and as much as glitter as the theatre can muster.

But, let the records show that just over a year since Stewart Pringle lavished a bunch of praise on Kill The Beast’s first London outing, at the 80-seat New Diorama, last Friday they played a triumphant homecoming gig to over 300 in the Lowry’s second space, and absolutely knocked it out of the park.

It seems weird to dwell so much on the event (in fact, you will be better off reading Pringle’s review for details of *what actually happens in the show*), but after Eclipsed, Rites, Iphigenia... and Mother Courage, He Had Hairy Hands was the first show I’d seen since the General Election that actually made me feel better. Humankind cannot bear very much reality, indeed. Generally speaking, I don’t tend to go in for wild escapism, or even seem to see that much stage comedy these days (blame Germany. And the fact that it is perishingly difficult to write about), but HHHH turned out to be exactly the right show at the right time.

In general terms, the piece is a pastiche monster mash-up of seventies horror films and cop shows. Their Victoriana is the Victoriana of the late seventies, and so on. Of course one *could* read onto the show’s current success a synchronicity between that recession and this, but doing so would rightly get you thrown out of Pseud’s Corner for being too po-faced. But, actually, it reminded me much more of those old Edinburgh Fringe shows like Garth Marenghi’s Fright Knight and Alice Lowe’s Moon Journey. Even the League of Gents’ ‘97 Perrier-winning, stage incarnation. So maybe the enjoyable nostalgic glow cast by HHHH was nostalgia more to earlier pastiches rather than all the way back to the originals.

Something else that’s nice about the piece is, well, the sort of uncontested Englishness of the whole thing. Yes, it would be nice, when saying that, if the company were maybe more diverse, since I’m absolutely not saying that what Englishness is all about is five white performers with impeccable RP. But it was cheering, after all that miserable bullshit in the run up to the election, to sit in a theatre in Salford with a huge audience of all ages, races, and I dare say classes (maybe no one actually upper-class, but nevermind, eh?) and all have a good laugh together before having to put up with the next five years.
Posted by Andrew Haydon at 12:24