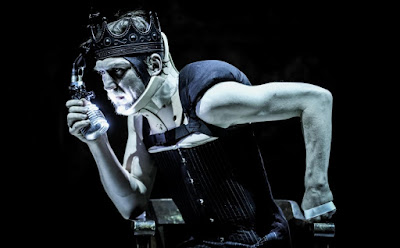 The opening of Thomas Ostermeier’s Richard III is one of the most exciting things I’ve seen on stage in recent times. For this production the Schaubühne has completely reconfigured Saal C. Usually a regular, raked audience facing its shallow semi-circular concrete stage; now the audience is seated in a dark wood and steel suggestion of Shakespeare’s Globe bolted to the curved concrete walls, with a new thrust stage pushing into it and immediately behind that, a high rough plaster wall, with almost-black wooden gantries criss-crossing it like wounds, suggesting medieval castles, ramparts, walkways and gallows. The players explode onto the stage in a volley of live percussion, loud music and hand-held glitter cannons. Glorious summer indeed.

Ostermeier’s House of York is younger than usual too. Less stately. More like Bullingdon Club bullies than House of Lords. It all feels terribly fresh and exciting. And then there’s the fact of Lars Eidinger – *that* Hamlet – fêted, in Britain at least, as Germany’s most exciting actor. And he does feel exciting. Understated but urgent. “Jetzt...” has never sounded more *now*, kinda thing.

But, this is still Richard III. Two hours and forty long minutes of it. (Sometimes, Shakespeare’s history plays make it seem like the monarch in question only ruled for the space of an evening. Not tonight.) As I understand it, Germany hardly ever does any of Shakespeare’s history plays* so the plot of Richard III – easily Shakespeare’s funnest (and least historical) history play – is a draw here. Perhaps as a result, Ostermeier’s *take* on the play, is essentially *just doing the play*. Perhaps pretty radical for Germany, and welcome if they just want to know what the plot is – and what the plot is, here, is a lot of blokes with the names of English counties shouting and running hither and yon – but pretty standard if you’ve ever been to the Globe. Also, I quite missed having a sense of drive, or any of the relationships between characters. Richard’s relationship with Clarence is well realised, and Clarence’s murder – stabbed to death, naked; blood soaking into the sand of the thrust – is suitably horrible. Much of what follows is far more muddied.

There are inventions: the two doomed princes are presented as shiny-faced, life-sized puppets; Richard throws a fair bit of food around, eventually daubing his whole face white with some sort of emulsion porridge; Laurie Anderson’s O, Superman turns up at (irritating, as always) length; hanging above the stage is an ever-present internally-lit old-fashioned mic, which also has a live-feed camera in it; and straps, from which Richard swings, and is eventually hung, upside-down, dead. [SPOILER, DEUTSCHLAND!].

Perhaps the most intriguing bit of staging, though, is that Richard’s final climactic battle is fought solo. Indeed, the small ensemble of nine or ten, already mostly playing two or more parts, never even show us Richmond. Once lords from Richard’s side defect, they simply disappear. Indeed, watching in a concrete bunker, in Berlin, listening to Richard rant and rave at his betrayal in German, it is hard not to think of a certain scene from a certain film popularised on the internet. But here, there’s almost a suggestion that the paranoia goes further still – not only is Richard battling real enemies, but invisible demons who eventually do him in unseen. Perhaps.

However, for all this, quite a lot of how this production unfolds is pretty bog-standard, and a long way from the most compelling reading of the part along the way. (Watching this RIII, I realised just how much of an effect Ian McKellan’s film of the play has had on my understanding/memories of it. Glib though the setting arguably is, its clarity and style is undeniable.) Essentially it’s a fine account of the play, perhaps dramaturgically streamlined a bit too much toward narrative at the expense of the incidental details and relationships that make the story matter in the first place, but without replacing these with either politics or metaphor. Similarly, while Eidinger’s performance of disability is rather superbly realised – the design of his hump, just a small, black cushion strapped to his shoulder is a particularly fine touch – the entire problem of Shakespeare effectively equating physical disability with a predisposition toward evil feels particularly untouched here. Indeed, my biggest thought last night was suddenly *really* wanting to see Graeae blow the whole mad, early-modern thing out of the water giving us both the rompy plot, *and* all the problems that it entails exposed at the same time.
___

Actually, you can see all the good bits here and save yourself 2hrs38.30:


*(Fair enough, really; why would they? Richard II has been surpassed by almost every play about a sad bloke in a room since, 1 & 2 Henry IV are wildly overrated, Henry V must be pretty irritating for anyone who didn’t win Agincourt, 1, 2 & 3 Henry VI are a hotch-potch at best... Ok, I’m taking the piss, but only just)
Posted by Andrew Haydon at 11:18