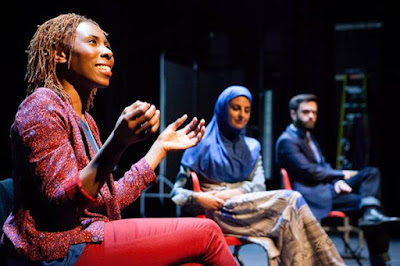 Rites presents an interesting problem to me as *a reviewer*: I’m privileged, middle-aged, middle-class, able-bodied, white-British, male. (“Critic” or “blogger” hardly matters after that lot.)  The piece’s subject is FGM – Female Genital Mutilation. Or “Female circumcision” – even the terminology is contested.

The show, made by Yusra Warsama and Cora Bissett is mostly a verbatim piece on the subject, and we see the m-strong company (sorry, I didn’t get a programme) take on the roles of the numerous interviewees. There are also [what seem to be] re-enactments of videoed interviews [from America?], panel events, and even a kind of ongoing narrative thread in which one woman makes phone calls to other friends – who are also portrayed on stage – and there’s a song at the end (which, not being London Road style, stretches the credibility of the claim that all the words on stage were spoken by interviewees – if that claim is actually made, I’m not sure now).

It is very well acted indeed. There are some appropriately uncomfortable digital video graphics (Kim Beveridge). But visually, for the most part the staging is purely functional. And this is the first hurdle I came to: it wasn’t immediately obvious why this was a piece *of theatre* [four days later it feels like I might have got there]. I understand that the issue is both important, and that the myriad, often surprising sides to the argument around FGM need to be heard. I will even admit that sticking me in a darkened room and making me watch the whole piece on pain of being-thought-rude is probably the only way I’d have managed to sit through it. (Not because I’m not interested, but because it’s both so depressing and so angry.) TVs are just too easily switched off. Hell, they’re easily not even switched on in the first place. At the same time, it seems strange to me that something that is plainly of social utility and enormous educative value like this has to be presented only to a paying audience who have to self-select to attend. It is a testament to the enormous popularity of theatre in Manchester (yes, fuck right off, Rupert Christiansen), that last night’s performance was so well attended (and with a demographic reach that the retired colonels reading the Telegraph couldn’t begin to imagine).

I mean, I learnt a lot. There is a question of whether FGM is good or bad. There is (at least) one woman in America who has had it done voluntarily as an adult to feel more a part of her community (who is given the name Karamoh Bangura but whose arguments echo those of the anthropologist Fuambai Sia Ahmadu, co-founder of African Women Are Free to Choose. H/T Mark Fisher). There are four different types or styles of the operation. There is a strong feeling that (White) Western “concern” over the practice is racist, condescending, none of our business and so on. There are women who didn’t even realise they’d had it done.

I did already know that it was largely carried out by women, on women (or female children), with the help of other women. I knew that there is nothing in Islam (the piece doesn’t address Christian FGM, although it touches on historical white, Western applications of the practice – “to cure lesbianism” apparently, God forgive them).

Against this there are plenty of (non-white) voices who deeply oppose the practice – both men and women. And the inevitable white-British voices who are also against it. Like UKIP, who bend over backwards to support anti-FGM groups – because it makes foreigners and immigrants look backward and “savage”.

It’s all very difficult and depressing viewing. All the more so for knowing that your male, white, western perspective is mear-as-dammit part of the the problem. Or in no way positioned to allow you to be helpful. I chatted to a friend (same demographic as me) who saw it the night before me, and they made some fascinating points. First that this was essentially popular postdramatic theatre, and secondly, that it was proper high-quality information that was being returned for the ticket price (if we have to reduce it to base commerce). Contact has an incredibly loyal, enviable local, working class, black audience. And they are getting hardcore, relevant, activist stuff on stage. And that is all an unabashed good.

It is probably also good for me as a privileged, middle-aged, middle-class, able-bodied, white-British, male to go and see some theatre in which my opinion is the least right or relevant thing in the room.