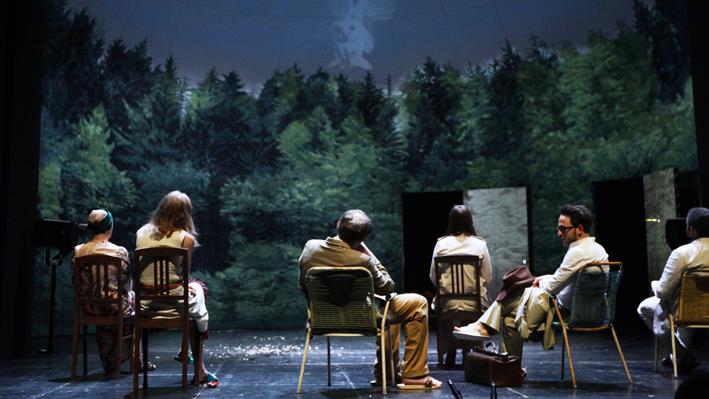 There’s a beautiful moment in Nurkan Erpulat’s new production of Uncle Vanya where Falilou Seck as Professor Serebryakov is left alone on stage. From the carefully constructed domed sky above the stage, a single spotlight slowly descends, gently smashing any pretence of illusion. Seck walks to the back of the stage, still talking, and opens a door in the cyclorama depicting the forest surrounding the stage. There is a bright light shining from behind the door, and smoke drifts out across the stage into the beam of the hanging spotlight. Stood half in, half out of the doorway, Serebryakov gives a little shrug. For some reason it’s one of the saddest images I’ve ever seen on stage. It turns out that he’s talking about how returning home doesn’t feel quite right somehow. Not as comforting as he’d hoped; not as homely.

I confess that up until that point I’d been beating myself up a bit during this production. Before seeing the show I did an interview with the artistic directors of the Gorki. And they’re brilliant: so politically switched-on and alive to the possibilities of theatre as a full-blooded instrument of real political change (link/s forthcoming). We probably talked a lot more about politics, history and “identity” than about, y’know, actual plays. So I really wanted to like the production too. And I was doing. The reason I was beating myself up slightly is that I was finding it a bit *normal* for Germany. Not normal-German; normal-British. I mean, I checked myself, and, no, even before the spotlight/door intervention it would still have been considered *a bit avant garde* in the UK. The effortless way in which the cast is multicultural, the modern dress, the small departures from *what Chekhov wrote*. Oh yes, there was still more than enough “intemperate excitement” to concern certain British critics. But no more so than you’d find in, say, Rupert Goold’s work. On one level, *of course* Rupert’s work is outstanding, and I should have just been relaxing and enjoying it, but since I was in Germany, I found myself – unfairly – wanting more upending of my expectations. And there I was watching a staging with the painted backdrop of a forest and the cast sitting in chairs and acting with recognisable, psychological realism (!).

It’s interesting, though. In theory, not *much* changed after the spotlight/door moment. The spotlight withdraw back out of view. Serebryakov closed the door and continued his soliloquy under the changing projected sky. Yes, more *things* did start to happen; but really it was the explicable sense of having been so moved that really shook things up at first. I think I also relaxed into the style of Erpulat’s production.

For some reason, I didn’t really tune in to the German last night (and, perhaps for the best, there weren’t any surtitles), and yet this production – running at two hours twenty(?) without interval – completely held my attention throughout. As opposed to the violence of a Castorf, or, say, the abrasive junkyard chic of last year’s Theatertreffen Vanja, the mood here feels mellow and buccolic, tinged with sadness and weirdness – shortly after the spotlight/door thing there’s another brilliant moment where Maria (Sema Poyraz) simply opens a tablecloth ready to drape it over a table and a projection of an owl in flight flashes across it in a blink-and-you-miss-it moment. Indeed, I think I did blink for half of it, and was really surprised to briefly catch this Lynchian omen suddenly part of the stage picture.

But, perhaps the best thing last night was the chickens. Man, am I a sucker for funny animals. But then, I think last night *everyone* was a sucker for funny animals. They’d been on stage for Act One, but they’d stayed pretty much huddled against the back wall. So much so that I didn’t notice them for about half an hour. Later, though, they’re returned to the stage and plonked down squarely in the middle. And join in a bit. Perhaps the absolute best moment last night is when Vanja (Tim Porath) performs a soliloquy of his own, essentially to one of the chickens. By this point, the revolve – not quite in the centre of the stage – has started to turn (at one point causing Astrov’s books to disappear though another door in the forest as he puts them down on this shifting ground). Vanja is laid out next to a cardboard box one of the chickens is sitting contentedly in. Vanja bemoans his fate, the chicken clucks sympathetically at him, with what appears to be perfect timing, while just poking its head over the lip of the box to stare at the audience and reflect on what a weird position this is for a chicken to find itself in. The mixture of extreme pathos and hilarity somehow feels like it realises the Chekhovian predicaments of the characters perfectly.

Overall, the work that the Gorki is doing tends to be more macro-political than this, and definitely less whimsical. For all that, this felt like a perfect addition to their repertoire. The building’s commitment to exploring “post-migrant” Berlin (their term) finds a perfect reflection in the personal-political level of Chekhov’s story about someone returning to their home after a long period abroad (reflecting the other side of the familiar family-left-behind story common to all countries experiencing significant levels of migration). But, more to the point, even without any knowledge of the building, its programme, or its politics, this is an intelligent, funny, sad, deeply moving production of a beautiful Chekhov play. And a brilliant way to spend a Saturday night.