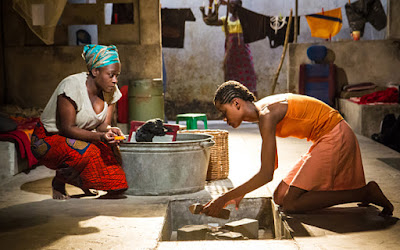 [The first 500 words of this were written immediately after seeing it, the following 500 or so the day after, it is now a week later and I’m finishing it...]

As far as I’m dimly aware, everyone else in the world loves Eclipsed. And, let’s be honest, it’s a brilliantly acted, superbly designed production; a script fizzing with sparky dialogue: funny, moving, and stuffed full of painstaking research on subjects about which we should definitely care. And, in terms of what the production represents in terms of London’s theatre ecology: yes, it’s excellent that there are five excellent parts for five excellent black actresses, and that the play is written by a young black woman and also directed by a woman, and that consequently last night’s audience looked more like the people with whom I got the tube to the theatre, than say Ascot, circa 1900. All great. No question.

At which point, my white, male, privileged opinion on any of it can just fuck right off anyway. Definitely. As Michael Billington recently observed in Matt Trueman’s interview with him, “criticism is not about the verdict. It’s about trying to write a sort of essay... about the work you’ve seen”. (Although that is a slightly disingenuous construction, if it’s an essay with a big ole star-rating.) It’s also worth saying that it’s incredibly hard to emerge from relentlessly depressing theatre – theatre which, in a full-on realist setting, presents depictions and descriptions of relentless rape, cruelty and violence without hope – and say “Yes! Result!”

And yesterday we just got landed with five more years of the Tory party: I’m not sure, even if I liked theatre that was *fun*, it would have helped last night. But deadly serious theatre about people whose lives are infinitely worse than our own didn’t help either.

But I really don’t know what we as an audience are meant to do with Eclipsed.

Here’s the plot: in a paramiliary compound “wife” number one and “wife” number three of a rebel general in the Liberian Liberation Army fighting Charles Taylor in 2003 are discussing their situation. A third, a fifteen-year-old girl, hides under a tin bath in the floor. This is a play in which repeated rape such a basic fact that it hardly warrants mention. Their situation is entirely hopeless, they keep as upbeat as possible, but basically it’s just awful. Number three is pregnant. Number two, we learn, is off out. She’s joined the soldiers. She reckons she has more power this way. That power is at the expense of her humanity. She makes a fine case for the uselessness of one’s humanity when placed in a situation where either you get raped or you find someone else to take your place. Men, all the men – the men entirely physically absent from the stage, but who hang over it in every other way – are brutal and brutalised monsters. So, yes, it’s good to see a play that does absent the men fighting the war from the stage entirely in order to examine the plight of the women. And it’s bloody fucking fantastic to see a play about Africa without a single westerner (white or otherwise) being used as a convenient dramatic “way in”.

Well, that’s partly true. The American side of playwright Danai Gurira’s heritage manifests itself in an abandoned biography of Bill Clinton. *Of course* America, as the then single largest interventionist power in the world, feels present in Liberia. (I know Africa’s not my specialist subject, by I’ve seen the statues to the guy on Bill Clinton Avenue in Prishtina, so I know it’s not just the Americans imagining things...). And, as Andrew Eldritch put it in 1990 defending the new Sisters album against accusations that it was “a bit American”: “American politics is global politics now...” (paraphrased).

This entry-level American-interest angle obviously bespeaks the play’s (originally) intended audience: Americans (and, sure enough, the play has won an armful of American awards). But, I think it also suggests what the play is really about. *Of course* the situation in Liberia is real, and all the research that the play contains rings true, as – within the usual limitations of naturalism and theatre, and the need for a “satisfying dramatic structure”/”story” – do the actions of the stage. However, the biggest truism about the theatrical stage is that whatever you put on it is a metaphor. Outwardly this play contains precious few metaphors. Yes, the women in the play are synecdoche(s?) for The Women of Liberia, and the tidy dialectic-without-synthesis in which they participate could certainly be seen as a micro picture of macro-Liberia. But this is a play that is actually about American political thinking. The central conflict is between a kind of Essential Ayn Rand (selfishness is all, altruism is evil) and impotent liberal do-gooding.

Interestingly, however, the British director, Caroline Byrne, has completely altered the playwright’s final image (yes, it’s one of those American scripts where every single minute of stage-time is dictated to the director by the writer). In Gurira’s script the youngest “wife”, who has become a soldier (simply The Girl in the published text), stands rooted to the spot with indecision. (American, Clinton) book in one hand, (Russian-designed) semi-automatic in the other, “random gunshots can be heard in the distance”. In Byrne’s production the entire back wall of the theatre lights up, and The Girl is silhouetted against a sudden picture – hitherto unseen – of African plains, and recorded music is played over this beautifully realised stage picture. And it feels kind of hopeful and epic, a bit like The Lion King or something. Where that hope comes from, I honestly couldn’t tell you. And to me it seems at odds with what the playwright implies. But really I wonder if what I really found hopeless in the play was what I’ll characterise as the “American non-choice”. Two failed ideologies in competition: “All You Need is Love” versus Atlas Shrugged. Perhaps additional feelings of impotence for this Western audience can be derived from our ongoing questions about what, if anything, we can/could/should do in terms of “international aid”.

It’s fascinating, even in the dramatic-ironic understanding of Bill Clinton’s narrative as the “big man” in America, applied through the characters’ first-hand understanding of how politics work in Liberia, describes a kind of futility. The small, new failed state looking at the vast, old, deeply failed States and hoping it might hold any kind of a solution. I can’t decide whether this is a play/production that sees America as representing something better, in which case I disagree with its analysis – apart from on the most obvious levels – or that sees in 2003 Liberia a picture of humanity, and American society in particular, writ large/in its most essential form: which is almost too bleak to contemplate.

Liberia’s president is now a woman who was educated in economics at Harvard and used to work at the World Bank and subsidiaries of HSBC. Its flag remains the star and stripes.  I still don't think capitalism is good.
Posted by Andrew Haydon at 10:59