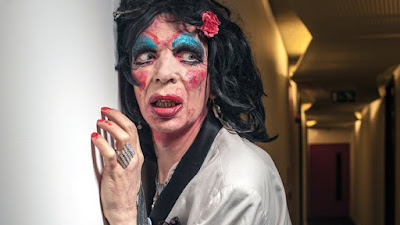 While London got Ponyboy Curtis last week, Manchester – for one night only – gets its own head-on Queer confrontation with the sheer hellish state of the patriarchy in the form of David Hoyle.

And, Jesus wept, how to describe? The show opens with Hoyle wandering around the part-dressed empty stage – at the back there’s an easel and canvas, the prostrate be-panted body of a young man prone next to it. Downstage left there’s a bunch of balloons. There’s a music stand with lyrics on it stage right (that’s the audience’s right in my use of the term and who cares if it’s correct?) – and part-dressed himself in falling down bright blue hold-ups and a nightie, he holds up a series of hand painted/scrawled signs offering everything from messages of hope (literally just the word “HOPE”) and statistics about self-harm and suicide rates in the LGBTQ community (the least true of which reads: “99.9% of homosexuals commit suicide”). For the next 2-plus hours (I had to bail because I had friends staying: I was told 90 minutes, I’d have happily stayed for twice that) Hoyle basically wanders around, apparently doing as he pleases, alternating between songs, routines, jaunts out into the audience.

The routines alternate too. There’s very much a spirit of post-election *hate* in the air. More than once Hoyle calls for everyone in positions authority to be executed. It basically runs “CAPS-LOCK DENUNCIATION OF [military/royal family/northern working class upbringing/other]” and smiling, ironic self-excusing thereafter for the same. There’s a song sung to the sound of an MRI Scanner. There’s alternate sympathy with and pity for picked-out members of the audience. But most of all it feels like a plea for everyone to just stop being a Tory cunt.

Over-analysis [any analysis?] seems futile in the face of such an onslaught. I loved it. It was joyous, wry, angry, beautiful. Arty and ironic-about-its-own-artiness: heartfelt, ironic-about-being-heartfelt, still heartfelt. Oh, and funny. Very funny indeed.

I do wish I could have stayed until the end. Even if it had gone on until one in the morning.