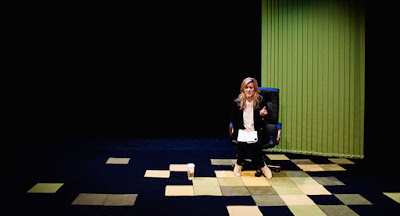 Do you remember The War on Terror? In this brave new austerity world, it has been quietly dropped as *a thing*. Mark Ravenhill’s monologue, Product, is now a decade old.

[A DECADE. JESUS. YOU HAVE NO IDEA HOW OLD THIS MAKES ME FEEL. AND SHOPPING AND FUCKING IS TWO DECADES OLD. TWENTY YEARS, FFS.]

I remember liking it fine at the time. Ravenhill played the original version himself, in Trav 2, during the Edinburgh Fringe, opening just under a month after 7/7. Terrorism was very now, then.

The plot of product, is: film executive pitches ludicrous film to famous actress. So, the majority of Product’s plot is the plot of this film. It’s a simple device, but a strangely satisfying one that allows Ravenhill both to have cake and to eat cake. And it’s a play that – remarkably – has gotten way better with age, I think. You’d think all that post-9/11 “political theatre” would have evaporated once their nominal subject had been de-written, but in fact Product feels all the more savage a satire now, with the benefit of the ten year hindsight. Targets that might once have felt flimsy, too easy, or maybe unnecessary have been vindicated by time.

If I remember rightly, while I liked it at the time, nothing, no single piece of theatre, was ever going to say everything that needed saying about the events exploding about our ears, but at the same time there was no end of the things.

Now, seen in isolation, on election night, after a week in Berlin thinking about totally different things (people bumped into including: Ravenhill, Mark), Product feels like savage lesson in (recent) history and the value of cynicism. (How quick some people have been to forgive a decade of illegal war, removal of civil liberties, imprisonment without trial, and torture).

The plot of the film-within-the-play, “Mohammed and Me” (!), is a kind of action rom-com: basically, imagine a man from al Qaeda filling the gap in Bridget Jones’s life that shopping just can’t reach.

Where Ravenhill’s performance was eerie, sarcastic, ironic and sinister (all in a good way), Olivia Poulet’s runs a real gamut – acting out more bits of the film, script always in hand; where Ravenhill’s film executive was sardonic, Poulet’s is needy, desperate, pleading. When Ravenhill *said* he really needed Famous Actress to be in the project, you got the impression that this was just him unnecessarily blowing smoke up her ass. Poulet’s version *really* needs it. Where Ravenhill’s production became about male power over women – the film script’s insistence on the sexuality of the leading actress in that context was overwhelmingly troubling – in Poulet’s hands it becomes more interestingly about one woman, who has bought into an anti-woman system, trying to sell that system to another woman. A woman who, here, plainly doesn’t need or want it.

Running at fifty minutes, it feels silly saying this, but it’s a really *enjoyable* way of spending a night at the theatre. Punchy and provocative enough to still make you wince while you laugh, and intelligent enough to offer a finely sketched overview of how Western Ideology infects far beyond the political into every aspect of the personal, there are much worse ways you could spend time/money. And that’s what we really want to know in a consumer society.
Sex and the City 2 LINK
Posted by Andrew Haydon at 20:12