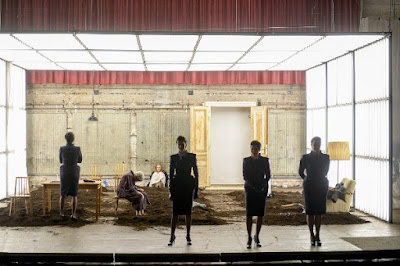 [experimental review format. This weekend I’m doing a workshop on criticism for young critics. Next week I’ve got to do two 330-word reviews. Today I’ve got to think a bit about how I write...]

[burbling intro. Useful mostly for me. Cut: I first came across Ewald Palmetshofer at Neue Stücke aus Europa in Wiesbaden, 2008. Actually, Felicitas Brucker’s production of hamlet ist tot. keine schwerkraft probably marks the very begining of my love affair with German theatre – ironic, given that it was for Schauspielhaus Wien. On this occasion it was everything to do with the staging and barely anything to do with the play. Back then Palmetstofer’s shtick was taking out either the auxiliary or main verbs of his sentences. The result was essentially untranslatable, to the extent that the simultaneous translator in Wiesbaden point-blank refused to read out the “translation”. So, to watch Hamlet is Dead..., we foreigners sat with a photocopied script in our laps trying to work out what the fuck was happening on the stage. Fast forward seven years (SEVEN YEARS!) and Palmetshofer has dialled down his shtick slightly. And the translators of Theatretreffen have brought their A-Game [since when did I say A-Game? And why does it look like a sort of Greek love? Agamè! Anyway...].]


The programme for Ewald Palmetshofer’s new play, Die Unverheiratete (The Unmarried), contains the full text of his play. It also – suggestively – contains an extract from Heiner Müller’s Electra. It turns out this additional text isn’t just included as a kind of literary mood board: at the height of Robert Borgmann’s production, it is delivered by the mother (die Mittlere – Christiane von Poelnitz) who’s sat on a mound of raw earth, covered in a bucket’s worth of blood, and thousand-yard-staring out into the audience, fairly spitting the words of theatre’s most famous mother-murdering daughter.

As a play, Die Unverheiratete is nominally about a crime committed by a grandmother (die Alte – Elisabeth Orth) in the dying days of World War Two – for which she was imprisoned; possibly for as long as twenty years – learnt about by her granddaughter (die Junge – Stefanie Reinsperger) from a notebook she kept. Her crime, it turns out, feels relatively minor – the betrayal, accidental or otherwise, of a deserting Nazi soldier – given the crimes taking place all around her. And the play feels like a kind of low-grade “Ibsen’s The Reader”. More striking and shocking is the grandmother’s unrepentant anti-Semitism – she dismisses the judge at her trial as “a Jew”; spitting the single word as if it were insult enough.

It is Borgmann’s production (which he also designed) that lifts the text [ – which, although surtitled, is impossible to really assess for literary merits; you get that it *is* literary in English, just not how, or how successfully – ] however. Twelve fresh burial mounds are sheltered under a hanger-like arrangement of strip lights, like in his Onkel Wanja at Schauspiel Stuttgart from last year’s Theatertreffen, but more so. On one grave, a huge block of ice – chest-high, shoulder-wide – melts, like in Nekrosius’s Hamlet.


The literary fragments and visual echoes of Borgmann’s production – along with the miniature chorus of “four sisters”, dressed in everything from Bo Peep style shepherdess outfits to [Austrian? Nazi?] military uniforms – elevate Palmetshofer’s tricksy and elliptical modern family narrative into something like the grand fatalistic tragedies of ancient Greece. A visual treat, if not an entirely satisfying story.


[it feels glib, but I guess I could work on it if I didn’t have so much more space here... And, Jesus, I’ll have to give it a star-rating. 4.5 for the set, 3 for the play. rounded down to three because UK audiences (generally/inc. me) go to the theatre to see stories, not philosophical installations? (and the philosophy isn’t so shit hot anyway.) Get me and my consumer guidance.]

[thought: ultimately you write the review you’re paid (or not) to write. The choice is whether to accept the money. Once you have, the skill is to acquit the task to the best of your ability within the constraints you’ve been paid to accept. Discuss. Although, Matt Trueman’s recent review of the Michael Frayn at the Hampstead for Time Out suggests that there’s a bit of latitude for expressing irritation once you’ve got your feet firmly under the table – i.e. I don’t suppose, if that had been his first review for Time Out, Andrzej or readers would have been very impressed? Maybe they would, though. Discuss.]

[Anyway, enough of the meta-criticism. Stuff I couldn’t quite countenance putting in a proper review includes:

This is pretty much the best set I’ve seen *in ages*. It seems that Robert Borgmann is my new favourite go-to point of reference for the best of how German theatre looks. I’ve sort-of described the general thing above – what I didn;t find space for is the rather beautiful visual conceit of two red curtains, one at the front, one at the back, rising and falling as if connected over the top like a too-short tablecloth. Except you can see that the one at the back is simply attached to a pole and is only maybe three metres high – flown in as a backdrop when required. There are also two half-transparent plastic sheet curtains which are drawn between two different sections of the hanger of strip-lights, creating shadowy depths in this shed of blinding light.

After seven years, I *still* don’t really get how chucking in random songs really works, or is allowed. But I definitely love it. Perhaps that’s why they (the Germans/Austrians) do it. Because it’s a totally awesome thing to do.

The interactions with the ice-block also deserve a mention. The daughter – particularly in an episode in which she explains her promiscuity to us – jumps on it a fair bit, lies on it, almost mimes sex with it. And all the while you’re thinking “that must be bloody cold/painful”.

And, yes! The daughter’s promiscuity! Christ. It’s incidental in the overall arc of the “story”, but my God, it’s kind of crucial. The piece opens with the daughter looking through the phone of a man she’s just slept with. Taking a photo of him on her bed with her right breast out of focus in the foreground – an echo of the photos of mountains already in his phone’s photo album, she says.

In the middle, she comes on in short skirt and leopardskin print coat (“nothing says ‘unhinged ho’ like leopardskin, right?”) and talks about how many other blokes she’s slept with since. And she’s been sending naked photos of them to the first guy.

At the end, first guy comes back and beats her up. This *maybe* ties up with her grandmother’s imprisonment and why her mother’s mother was twenty years old than all the other mothers (having been in prison and ashamed in her village etc.).

Is this difficult and a bit patronising to women? Oh, hell yes. But then it’s more a literary device than a study of how anyone anywhere ever actually acts. (Including men who have had a one night stand?) Still, I don’t suppose Ewald P. will be on Everyday Sexism’s Christmas card list, even if every part in this show is explicitly for a woman, and they’re all *interesting* at least. “Why didn’t you get a man sooner, after the war?” asks die Mittlere at one point. “Because there weren’t any. They were all cripples.” replies die Alte testily.

Die Junge also has a lot to say about postmodernism. This, for me, tapped into an interesting conversation about the whole Austrian literary style/thing about langugae, which my friend says maybe stems from Wittgenstein and has to do with genuine, profound mistrust of words really meaning anything, or achieving their meanings adequately. I’d love to quote a bit, but the text is only in German, sadly.

Positioning the production in terms of “Germany”, Theatertreffen, and the UK, weirdly, I think a straight transfer of this play, *in English* with all the Austrian/German performers swapped for British counterparts, but in exactly the same production, would actually seem completely fine in the Lyttleton. It would be visually superior to most British theatre (IMHO) (even though we are shit hot more and more often), but while the play would make as much sense to Brits as it does to Berliners (*some*), and the style wouldn’t feel so removed from something Michael Frayn or David Hare could write (not least the film of The Reader), there’s no especial reason for us to do *this play*. Much more interesting to get Robert Borgmann over to direct the première of the new Duncan Macmillan or something...

Let's not forget Werner Schwab when it comes to the Austrian approach to breaking down the German language in theatre.