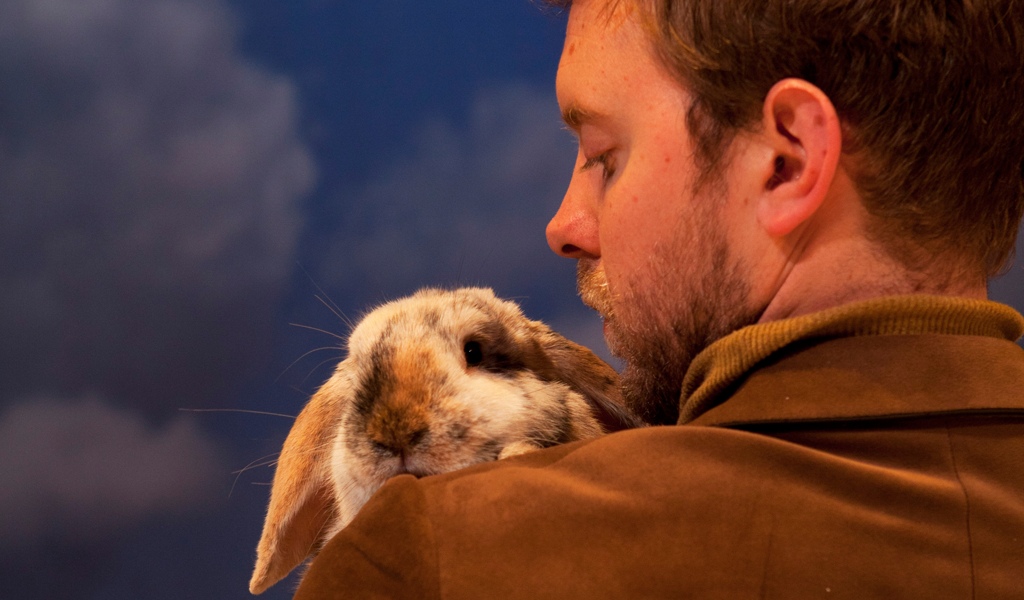 [contains spoilers. suspect it’s only me who hadn’t already read the book anyway]

It would be trite and uninteresting just to gush about how lovely Purni Morell’s production of The Velveteen Rabbit is. It is lovely. Utterly lovely. But where does that get us? It’s for audiences aged four and over (although the presence of several babies and under-fours enlivened the whole experience no end on Wednesday afternoon), and they’re not really my core readership, so you’re going to want something a bit more, well, rigorous, right? And I have to admit I was feeling a bit stuck. Because, well, when something’s lovely, you don’t always want to go all explainy about it, do you?

Do you know the basic story? I didn’t (well, someone once explained it to me, but I’d never read the (1922, American) original). It’s about a boy who loses his china dog, and is handed the long-overlooked bunny toy as a replacement by his nanny. It’s been explained to bunny that to become real you have to be worn almost to bits and loved by your, well, owner, I guess. Boy and bunny become inseparable until boy catches scarlet fever, bunny sits with him until he’s better, but then, being a toy bunny likely to be carrying traces of the scarlet fever, he’s put out to be burnt along with the rest of the contents of the room. Boy fucks off to seaside to convalesce and bunny escapes fiery fate by means of tears, a magic flower, and a deus ex machina fairy who turns him into a real-real rabbit. (Oh, the whole thing of the story is toys only become “real” when they’re loved very much by their owners. Sounds a bit bleugh, I defy you not to get a bit misty eyed.)

As well as being lovely, there were also plenty of bits of what felt like the original narrative to stick in the throat – from the “needing external individualistic validation” thing, through the character of the adventures which the boy and his bunny play-imagine (all pretty colonial-looking to me), to the “in heaven, every thing is fine” ending. On the other hand, they didn’t stick in the throat so much that I didn’t also (at precisely the same time) find the whole thing completely charming. (I also probably spent an improbable amount of time wondering if children these days even recognise, let alone play at, those tropes of Boy’s Own-style mountaineering and arctic exploration and imperial navy stuff, or if the comprehensive Disneyfication and Technologisation of everything had banished all those bad old Imperialist post-war games to the last century in favour of consequence-free Pirates and anti-state-ownership Dragons. And whateverthefuck Spongebob Squarepants is. Or something).

In terms of style, both direction and design (James Button) feel so stupidly effortless, so perfectly judged, that it’s genuinely difficult to know what to say about it beyond description. The whole thing takes place on a wide apron-y stage with large floorboard drawn on it, and with a surprising number of trap-doors in it, in which are stored most of the props – judiciously assembled, nice-looking, vintage toys, mostly. A big raked bed is wheeled on and off, there are some large (also “hand-drawn”) curtains flown in, and the rabbit is revealed by the lowering of a big sock at the beginning.

Similarly, the cast here is so beautifully put together that it’s surprising to discover they’re the second cast for this show (now on it’s third? fourth? Outing). Christian Roe – familiar from Chris Goode’s Monkey Bars – is a lovely presence as the largely accepting, bemused, benign bunny. Ashley Byam as the boy (did he have a name?) is just the right side of boisterous, but neither of them actually get to say much – they’re mostly tearing around the stage like a kind of live picture book (movement – Wilkie Branson), pitch-perfectly narrated Anthony Weigh (yes, also the playwright! Who knew? Probably everyone except me...) as a kind of everyman authority-figure-in-a-suit, forced by early expediency to reluctantly don the apron and old-style floppy maid’s cap.

And so we hop on to What It All Means. And, well, I had a really interesting conversation with Matt Trueman earlier, who swore blind to me that I was mad for completely missing what he saw as an out-and-out gay subtext. Not even *sub*-text, but a full-on queered performance. It’s not a point he emphasises in his Time Out review, which is partly why I flag it up here, away from small-c conservative parents. And while I’ve found it an appealing reading that I don’t want to dismiss our of hand, I can say, hand-on-heart that it never once occurred to me while I was watching. I mean, yes, sure, there are two handsome young men in their mid-twenties bouncing around on their shared bed together, but, like, ONE OF THEM IS A RABBIT. And that was that as far as I was concerned. Christian tells me he’s a rabbit, then a rabbit he is.

My reading was much more of the, well, the sort of socio-political backdrop, or the psychology of the thing – both then, and how that reads now. For my money it was about as stark a Christian afterlife allegory as C.S. Lewis’s The Last Battle. *Obviously* that ending can be repurposed by atheists as much as they like toward something about, oh, I dunno, love or something, but (thanks to my upbringing) I reckon there’s something excellent about a big old hardcore “Yes, there is a glorious supernatural force that’s going to totally sort everything out for you in the great hereafter” ending. So I decided that’s what it was. I mean, as an atheist I also had my problems with telling children that. But then the children possibly hadn’t stopped thinking Christian was anything more than a rabbit, and so had overlooked the indoctrination that almost certainly wasn’t going on anywhere other than in my mind anyway. I also wondered if it was some sort of post-WWI make-better equivalent of the Peter Pan quote about dying that apparently echoed through the senseless slaughter.  Indeed, given Matt’s, mine, and my plus-one’s wildly variant, equally valid readings, I think the main take-home message is that Velveteen Rabbits are especially good at confirming biases. Still, this is gorgeous and you should all go and see it.
Posted by Andrew Haydon at 10:41

I am reminded how the OBVIOUS SUBTEXT to "Get Santa" was FURRY LIBERATION NOW because the parent of the main character was a woman who was married to a man who liked to walk around the house dressed as a dog, and all of the characters acted like this was completely normal. He even liked to pretend he was a dog and "take himself for walks" when he needed to go to the bathroom. I thought this was the most subversive thing I'd seen on stage in London IN AGES but over time I realized that it was, really, supposed to be a dog on stage. But then that could have been seen as a call for TRANS SPECIES MARRIAGE and that's a whole 'nother kettle of fish.