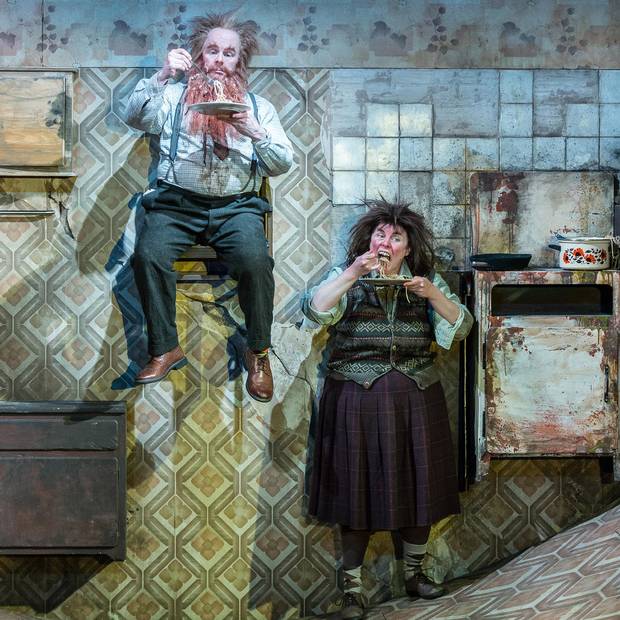 Where does one’s taste come from? It’s a perplexing thing. I’m reasonably happy to imagine that the very first seeds of my implacable modernism and minimalism (Ha! As if!) can be identified in my infant self’s disdain for Roald Dahl. I’m just not all that into silly words or grotesque characters. It’s like Russell T. Davies’s names for things in Dr Who: bloody awful. “Snozzcumber” just isn’t funny, in precisely the same way that “Raxacoricofallapatorius” is a shit name for a planet. I thought Fantastic Mr Fox was alright. That’s about it.

Another writer I’ve never been as into as everyone else is Enda Walsh. Sure, I admired the energy, verve and obvious talent behind Disco Pigs when I saw it back in, what? ‘97? ‘98? (Original production, second cast, Edinburgh fringe). I thought Alex Swift/Ferguson’s Playroom production of Bedbound in Cambridge 2002 (and NSDF 2003) was a superb achievement, but the actual story left me pretty cold. By 2007, when I saw Walworth Farce, I think I’d worked out that the structure that Enda Walsh was exploring – characters forced into a kind of meta-theatrical trap, forced to re-enact the same story over and over again – left me cold. And his much-admir’d use of language, well, it was a matter of taste, and was all a bit snozzcumber to me.

So, *obviously*, even before not being a child, I was already not exactly the target audience for this, but for various reasons I was still looking forward to it. Theatre is, after all, nothing if not a series of weird alchemies; a load of stuff you don’t like gets tumbled together into something you do...

But, suffice it to say, in the event, I didn’t like The Twits at all. What I’m interested in doing in this review is getting past the point where a critic saying “I hated it” is the end of the conversation.

Oddly, the reasons for not liking it have precious little to do with my infant abandonment of Dahl. Walsh’s adaptation of The Twits takes a very short book about two joyous grotesques and, well, it sticks them into an Enda Walsh play (see description above about meta-theatre). Albeit, in this version, it’s an Enda Walsh play which also has a big neon sign saying THE POSH ARE YOUR ENEMY hanging over the metatheatrical Welsh monkeys, forced by the Twits to enact the story of a fairground being nicked off some Northerners from Leeds.

Weirdly, the meta-theatre doesn’t stop there. As well as being an adaptation of The Twits, and an allegory of how the Tories are shitbags who need to be defeated by a coalition of Northerners and the Welsh, it also seems to have been staged as a daring Christmas show take-down of Jez Butterworth’s Jerusalem; a devastating critique of the most right-wing play that the Court ever produced. There’s an amusing round-the-Christmas-dinner-table scene which might be a pastiche of Martin Crimp’s “Christmas show” (but doubtless isn’t). And, then, it’s got an set which, if it isn’t directly referencing Andreas Kriegenburg’s design for Der Prozess at the end, then I’ll eat my snozzcumber.

I guess, for my money, there were two reasons this Twits didn’t especially appeal to me, though (both personal taste, obvs, but one much more so than the other to my mind). The first thing was the level of cruelty, or the way the characters were positioned/how the narrative unfolded around them. The other was the way in which the piece tried to deploy its politics.

The former fairground owners (a completely new invention/imposition, as far as I understand it) have a really miserable time before the interval. They don’t have such a great time after it either, but I *really* wasn’t especially into just watching them being done down and picked on. Especially with an audience of children. Certainly in the matinee I watched there didn’t feel like there was enough glee to make it seem much different to sitting down and watching Katyn with some under-tens (ok, I exaggerate, but I’m a sensitive soul). Bear with me, though, because it feels like this is intrinsically linked to why the politics of the piece failed for me.

The whole thing bashes one so hard over the head with a big old leftie message that by the end, even as a card-carrying Marxist-Leninist, I was starting to itch to vote Tory just out of spite. A really useful contrast is the Unicorn’s Velveteen Rabbit. On the surface of it, The Twits is the obvious leftie choice: it’s all grungy, gritty and about the overthrow of some (now) posh gits. Velveteen Rabbit, by contrast should be this twee, toothless, fluffy thing. In reality, ...Rabbit, by taking the apparently docile subject, is far and away more rigorous, interrogated and subversive than this, which just spoonfeeds you precisely what to think without even so much as a dialectic. The Twits, you see, are out-and-out evil, really. They’re so unwholesome that the moral here is something that even the Daily Mail could get behind, it’s so clear cut. Sure, there’s the odd joke about not paying the monkey-actors enough and etc., but ultimately this is a play in support of the small business owner (a fairground) against The Evil Establishment. Hell, last time I looked, that was also Nigel Farage’s pitch.

I dunno. It’s weird. You’d think I’d like The Twits to be pressed into service as socialist agit-prop, turning Dahl’s cruel, illiterate, proto-Fred and Rosemary West types from troglodytes into the upper classes. But somehow it feels like a trick more crude than anything the Twits themselves get up to. When at the end, the victorious petit bourgeoisie sing Morning Has Broken together (yes, that really does happen, and I don’t think it’s meant to be ironic either) in a weird sort-of finale evoking *my* school assemblies (God knows what the youth of today will make of it) and the faint suggestion that Yusef Islam might have the answer?  I dunno. Sorry. No, I really just don't know what anyone was thinking there.

Hi Andrew, of course totally fair enough critique except the show is for kids & much of what you analyse just doesn't read to them. They need some big sign posts especially amongst this grotesque (almost bouffon) style (tho would have liked more of this as the tradition works well for this story). I wondered about welsh monkeys & carnival folk having revenge on posh people & taking over the world with coloured lights & 'morning has broken' but hey this election campaign is pretty silly in a sad, confused and much scarier way. I'm ok with twits silly especially as it works wonders for my 9yr old. Suggest tagging along with kids to a kids show as their perspective helps a lot.

Can you explain why Jerusalem is the most right wing play the Royal Court ever produced?

I'll let the Daily Mail explain it for you. :-)

Jerusalem received more five star reviews than any play in the history of the West End, across the entire spectrum of the British print Media. What was it that you personally felt made it so right wing?