The Rise and Fall of Little Voice – Kings Arms, Salford 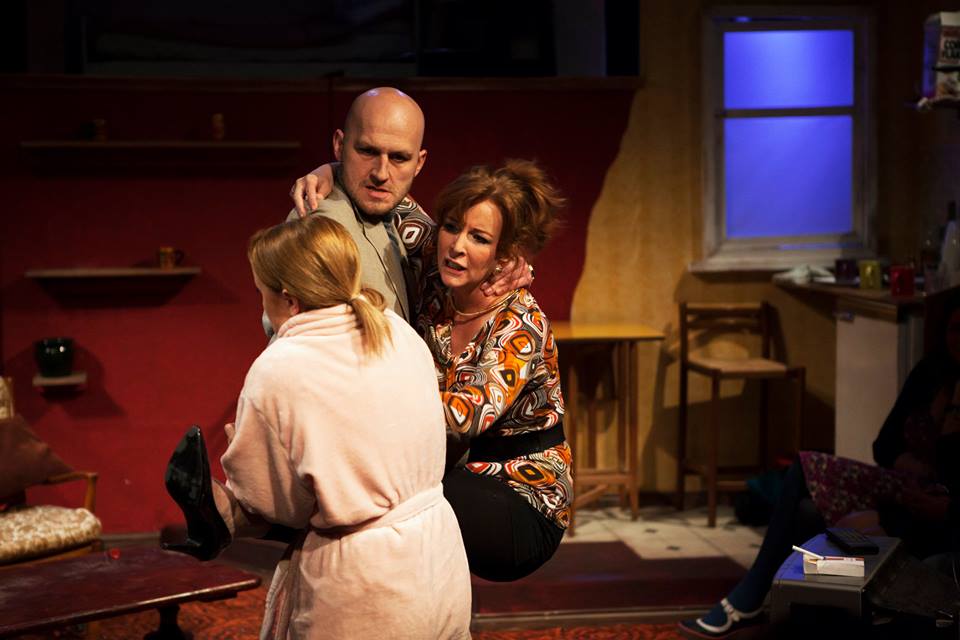 As I’ve already said, I’m a bit late to the Jim Cartwright party. Watching Little Voice at the King’s Arms last night, I got another good idea of why: I used to live in London. Apparently LV premièred at London’s National Theatre in 1992, directed by Sam Mendes and behaving as a star vehicle for Jane Horrocks and Alison Steadman. And, well, it’s just too easy to be cynical sometimes. I think John McGrath says it best – referring particularly to the plays of David Storey and Arnold Wesker at the Royal Court in 1960s – when it notes that “this famed New Era/Dawn/Direction of British Theatre was no more than the elaboration of a theatrical technique for turning authentic working-class experience into satisfying thrills for the bourgeoisie.”

So, yes, before even a word was uttered I was pleased to be seeing this for the first time at a pub in Salford rather than in the Cottesloe; even if, 23 years down the line, parts of it already feel more like a history play than anything to do with present-day Lancashire (the whole first scene revolves around getting a land-line installed. A land line! Imagine!).

I suspect everyone else already knows the plot of Little Voice (from the film if not from seeing it on stage), even I had a basic grasp: withdrawn daughter of brassy mum turns out to be able to do uncannily good impressions of famous singers. Her mother’s latest gentleman caller wants to put her on stage at the local variety club (again, history play). Mother and boyfriend conspire to push child into lucrative stage career. Child is unhappy. Mother’s house burns down. Child goes off to start a relationship with a similarly withdrawn bloke who’s been stalking her. To be honest, despite a touching conclusion, the plot does fall apart a bit in the second half, all getting a bit “and then, and then, and then...” with rapidly spiralling improbability. In fact – let’s get the negatives out of the way here – I reckon with a running time of 2hrs40 (inc. 20 minute interval) I reckon it could probably lose twenty minutes. That said, as a positive, I couldn’t point to anything I saw last night and say, yeah, that’s the bit to cut. Moment to moment you’re completely with the action throughout, and eagar to learn what happens.

So this is weird, right? I’d usually have said – at least on paper – this sort of thing isn’t my bag at all: from the broadly naturalistic set, through the proper story, to the total lack of European anything... And yet, I admit I was pretty taken with this Little Voice (more so before the interval, but I’d been up since half six and was at the Lowry Studio showcase from 12 – 5.30pm, so maybe all the second half really needs is audiences who have had a nap). It’s impossible to single out a particular aspect of the show that made me go “YES”, but it totally happened. The set is clearly a creative labour of love (designed and co-built by director James Baker). Clever eliding the various rooms of the (northern, terraced, back-to-back) house, and with an upstairs level, playing into (what I think is) a reconfigured thrust version of the King’s Arms’s high vaulted space, with a cleverly unfussy way of transforming it into the nightclub of part two...

And then there are the performances. Bloody hell they’re good. Jeni Williams as LV’s mother is a brilliant permanently pissed blizzard of tits and swearing (the character refers to her chest non-stop, ok?), while Josie Cerise, well, she’s good at “being withdrawn”, but she knocks all the covers/impressions out of the park. Liam Grunshaw nails the wheeling-dealing Ray Say, ably supported by Leo Atkin’s Mr Boo – both also turning in fine in-character songs. There’s also excellent comic support from Laura Lindsay as much-teased overweight-friend Sadie, and Ben Sherlock’s Billy is earnest enough to make what could be pretty creepy attention to LV seem sweet and desirable.

So, yes. This is yer proper quality fringe musical, played pretty much exactly where it’s set. Apparently there’s a version opening at the West Yorkshire Playhouse next month (seemingly Little Voices, like Oresteias, come not as single spies...), but it’s very hard to see how a bigger venue or budget will be able to improve on this much care, attention and love.
Posted by Andrew Haydon at 11:49