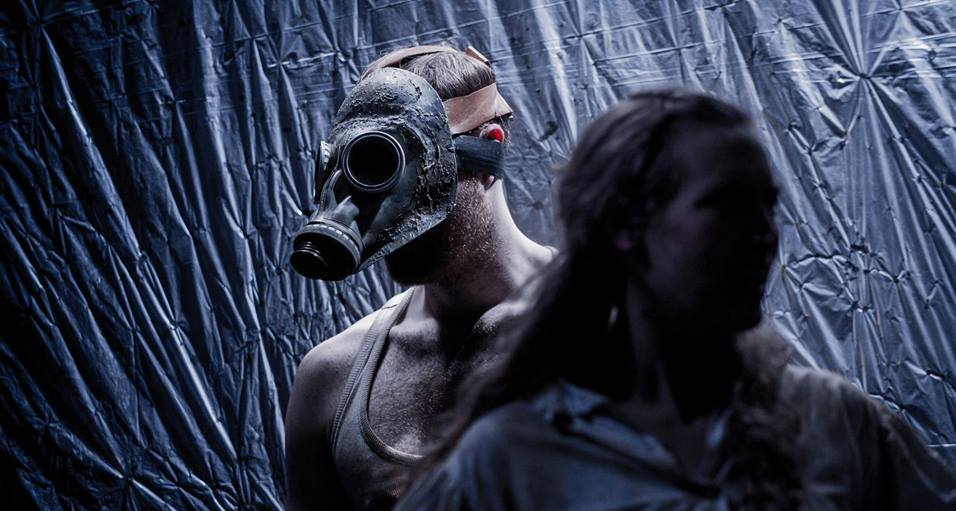 Blush of Dogs by Roland Reynolds, who also directs, is possibly one of the boldest, most original debuts I’ve seen in quite a while. It’s as uneven as hell, there are definitely misfires, and the production doesn’t always pull itself off, but against this, there’s ambition, rawness, and a willingness for excess – and just sheer unremitting intensity – that hasn’t been lost in some sort of endless script development hell.

The basis of ...Dogs is a grimy retelling of Seneca’s Thyestes. Situated in this production between ruined classical columns with Tiresias wearing a WWII-style gas mask, it continually feels both ancient and modern, with startling comic interjections punctuating swathes of grand poetic language. In this it feels like the production’s closest theatrical sibling is Sarah Kane’s Phaedra’s Love, and before that the later, madder plays of Howard Barker. However, unlike Caryl Churchill’s straight translation of Thyestes, Reynolds has done a fair amount of mucking about with the actual plot itself. What I remember (quite plausibly incorrectly) as being largely the point of Thyestes – its Titus Andronicus-style finale – is here jammed quickly into the last fifteen minutes, and with a surprise new pay-off to boot. Preceding that is an hour and fifteen minutes of dense, verbose, poetic text, which may also be claiming some unexpected set of contemporary parallels. The text overall certainly feels redolent of a youthful cynicism regarding expedient trade agreements and the amorality of our leaders.

In a year which is to see three (three!) new versions of Aeschylus’s Orestia, and a raft of other Greek plays continuing on into 2016, it’s rather refreshing to find someone turning to the violent fascistic tragedies of Rome for inspiration. Where the Greeks created conversational, philosophical pieces with the action mostly taking place in the next room, Seneca’s plays read more like uncompromising moral sermons delivered up to their elbows in ever present blood.

The production itself, is, well, like I said, it is uneven. It is performed by an ensemble of three – Ben Alderton, Anna Proctor and Mike Corsale – each takes one of the principal characters Atreus, his wife Aerope and Thyestes respectively, as well as each taking turns as the gas-masked, blind prophet and parts in an endless chorus of barnacle-masked plebians and slaves, squatting on the orange-peel and juice-carton strewn floor, or reasoning with one another on the morality of cooking their master’s children. The two blokes have quite differing acting styles, but the contrast works: Alderton’s Clarkson-like posh ruler offset by his wide-boy brother. Proctor, on the other hand, is – at least for my taste – far too wrapped up in a world of diction and projection hailing from another century: in a pub theatre in which you’re sometimes standing only inches away from your nearest addressee, and can literally only ever get four or five metres away from your farthest, it feels an error to rigorously avoid all eye contact during passages of direct audience address and to bellow with enough volume to reach the back of the Olivier. I say all this with the strict proviso that I know nothing about acting, and that it’s a matter of personal taste, and that was just something that really didn’t work for me. I (think I) know the sort of thing it’s meant to be, but in this instance it doesn’t quite come off. (I’m not saying it *couldn’t*, even if it’s a style that I tend to file under “less-preferred option”.)

Elsewhere, though, there are some properly great physical moments. At the start, while Corsale and Proctor scrabble about on the mucky floor Alderton as Tiresias just stands at the back doing some really bonkers, aggressive dancing. Then, later, there’s a brilliant scene in which, while Aerope screams on and on about either fucking Thyestes or getting raped by him – it’s not entirely clear what she believes and what’s a lie for the benefit of her husband – Atreus and Thyestes, strip down to their pants, oil each other up, and indulge in a big long wrestling match. The effect is both striking and in some way incredibly, bleakly funny. There were quite a few laughs last night, and while it didn’t feel like they were necessarily intentional, it was quite clear that they were both an audience releasing pressure, and also definitely on side, laughing with a production that definitely owned its own sense of the ridiculous, rather than laughing at it. Indeed, it was this heady mixture of intensity and ludicrousness – occasionally nodding at its own preposterous set-up – that made the thing feel all that more plausible and visceral. The really very small auditorium amplifying the tension, rather than feeling as it looked like it might have wanted to be: spread out more on the stage of somewhere like the Almeida or even Lyttleton.

Annoyingly, the script doesn’t seem to have been published (get on it, Oberon), and like so many first (or second, or so?) plays, it's unlikely that it’ll get a revival any time soon. But this feels like a real pity. I’d be really interested to see a load of different productions – a massive one without doubling, a properly deconstructed one, etc. etc. etc. But, as a first outing for the piece, and as a kind of signature piece for Fragen Theatre Company, this seems like the start of a really intriguing proposition. 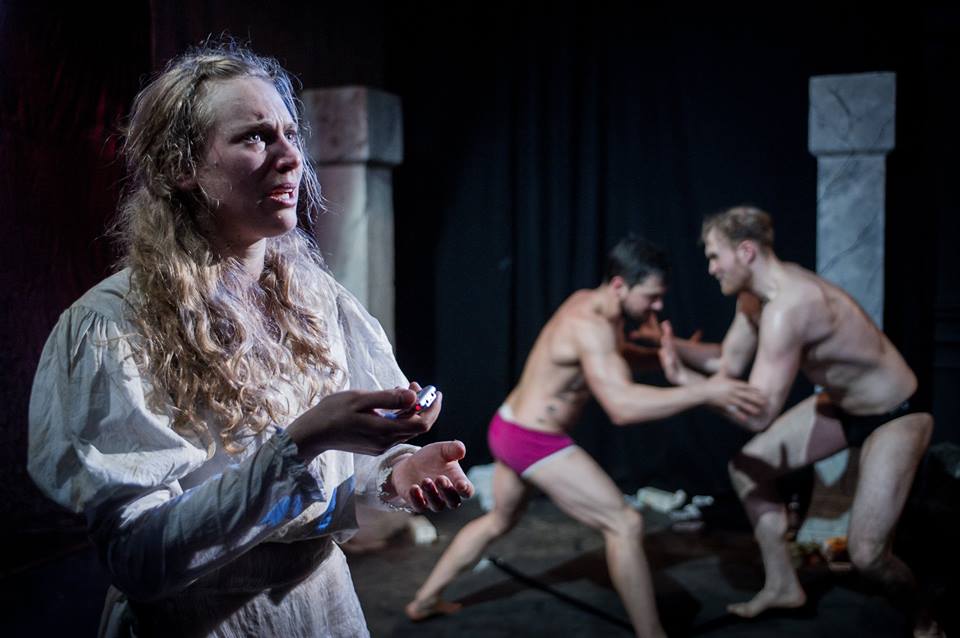 ..."Where the Greeks created conversational, philosophical pieces with the action mostly taking place in the next room"…

Doh! When are you retaking your Theatre Studies GCSE Haydon?