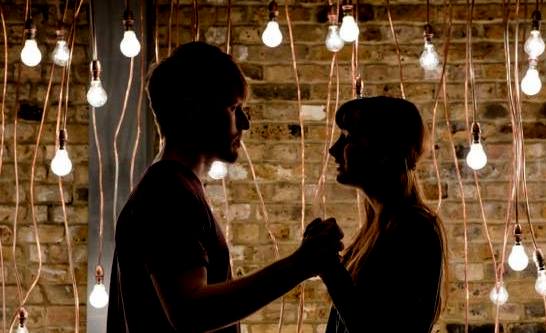 [On Tuesday I was lucky enough to be invited to chair a pre-show discussion for Abyss before I saw the performance itself. As a result, I went into the show with *some* privileged knowledge, but no more so than anyone else in the audience that night. I’m not going to now try in writing up to ignore stuff I discovered beforehand, but then, if you read this review (or any other), you’ll equally go in with a whole other set of preconceptions. So, yeah, consider the myth of the ideal audience member or the possibility of an “objective” perspective, comprehensively shattered.]

Maria Milisavljevic’s Brandung (Surf? Breaking waves?), here Abyss, winner of the 2013 Kleist Prize, comes to Dalston from Berlin via Toronto. The story (how cliché and anglophone to start by trying to define a story here) ostensibly concerns the disappearance of a girl, Karla. Her ex-boyfriend Vlado, still in love with her friend Martina, and her sister Sofia (named in the script as He, I, and She), try to find her. Martina’s new boyfriend Jan, also played by Vlado-actor. They sort of self-narrate themselves – frenetically, relentlessly, here – round the (German) city where Karla disappeared. Vlado is Serbian, ex-Yugoslavian. His father was Serbian and his mother was Bosnian. Underneath the story of Karla’s disappearance lies a much longer, older story of when Vlado left ex-Yugoslavia, the question of what happened to his parents, and what an old German man found with Karla’s bag means by his story of a man who burnt down his house, and what he sees in Vlado’s eyes, why he passes on the name of the man who gave him Karla’s bag. The police briefly suspect Vlado of the murder itself

In his review of the show, Matt Trueman suggests we imagine Martin Crimp’s The Killing, if that's the game, I’d go with Frantic Assembly’s Twin Peaks. Director Jacqui Honess-Martin has recruited a *very* young cast, all fewer than two years out of drama school and approached the text with a restless physical approach. In the pre-show talk, she talked brilliantly about how the production had avoided the usual pitfalls of bringing a traditional British psychological reading to bear on the text. This is both evident in the production and laudable. A slight potential drawback in the approach – at least to my untrained eye – was that alongside urgency and physicality, there was perhaps a bit too much one-note emphatic volume. So, while avoiding psychology per se, perhaps saw performers fall back onto unconscious default settings. Indeed, watching Blush of Dogs last night, it struck me that if they had done half the voice-work they appeared to have done and donated the other half to Abyss, both productions would have benefitted. Similarly, personally, I’ve have turned down the choreography from 11 to about 3 or 4. But, again, that’s (obviously) just a matter of taste – and what is there is excellently executed – but I’m quite fascinated now by that new(er) school of choreography in which the dancers/non-dancers do stuff that literally anyone *could* do, but with infinitely more precision and muscle memory. This, by contrast, was more along the lines of being out-and-out impressive. But, that all sounds way too critical. They were things that I quibbled with internally a bit/“would have done differently”, but that’s not my job, and no one wants critics to redirect shows that don’t need redirecting.

Where other reviews have focussed on the murder or suicide of the missing Karla, it struck me that really the play was more “about” (ha! No, “about” is wrong) the strange lineages of revenge whether in war or peace that trickle through lives or communities, gradually eroding whole edifices. Set against this, there is the narration of a rather fussy way of killing, skinning, and cooking a rabbit, at once suggestive – at least before the drowned body is found – of Karla’s possible murder, and the atrocities of the civil wars in the Balkans which are forever being hinted at. The disappeared young woman, by contrast, simply becomes a hole in the normal run of things that allows both characters and audience to looking though it and see what’s under the surface.

For me this seemed much more to be, obliquely, a play about the traces left of European history, the ghastly spectre of WWII that haunts Germany, the aftermath and Russian occupation, and the more recent implosion of Yugoslavia, at almost the precise moment of German reunification. I imagine, that watching the piece in Berlin, all these experiences feel infinitely more present in a city that still wears those scars, and is only one day’s train ride to Belgrade. Certainly more present than it feels for Britons, for whom “European” history is something that happens overseas, and infinitely more so than in Canada, I’d imagine.

It is/was interesting to learn that the “English” version of the script forms kind of a halfway house between the more abstract, philosophical, inconclusive German version and the much more explain-y Canadian one. Apparently, Postcards’s favourite German-Canadian, Holger Syme, did a pre-show lecture for the piece at its Tarragon Theatre première, the nutshell version of which was that should be considered totally different plays, both of which are pretty good.

This struck me as a good thing. It was interesting, also that the German world première of this play, this prize winning play, presented only 50 pages of 94 (88 in English – German words are longer). As such, perhaps our idea that we have a “writers’ theatre” is, as I’ve said before, mistaken, insofar as it no more respects a writer’s vision to suggest re-writes, than it does to cut 44 pages. On the other hand, I think, particualrly when it comes to international collaboration, InSite theatre (and Tarragon before them) have uncovered a certain truth about European writers and anglophone theatre. Rather than hoping that we can somehow fill in the gaps in shared local knowledge that get left by an untouched extant script with an outstanding production (as we now try to do with English language theatre’s most successful export: Shakespeare), if writers are still living, we can in fact recruit them to help adapt their work for our unsuspecting audiences.

Perhaps gradually through collaborations like this, such collaborations will become less and less necessary as British audiences get a bit more used to the ineffable “let’s not explain anything at all-ness” of German theatre (characterised by Trueman as “confusion creeping in at the end”). I do wonder, though. Local references are local references, after all, and German theatre comes from a long, intense, intricate 70-year post-war history entirely different to our own. On the other hand, as with the Twin Peaks reference at the start, I reckon anglophone audiences can take more weird than we’re credited for.
Posted by Andrew Haydon at 19:49