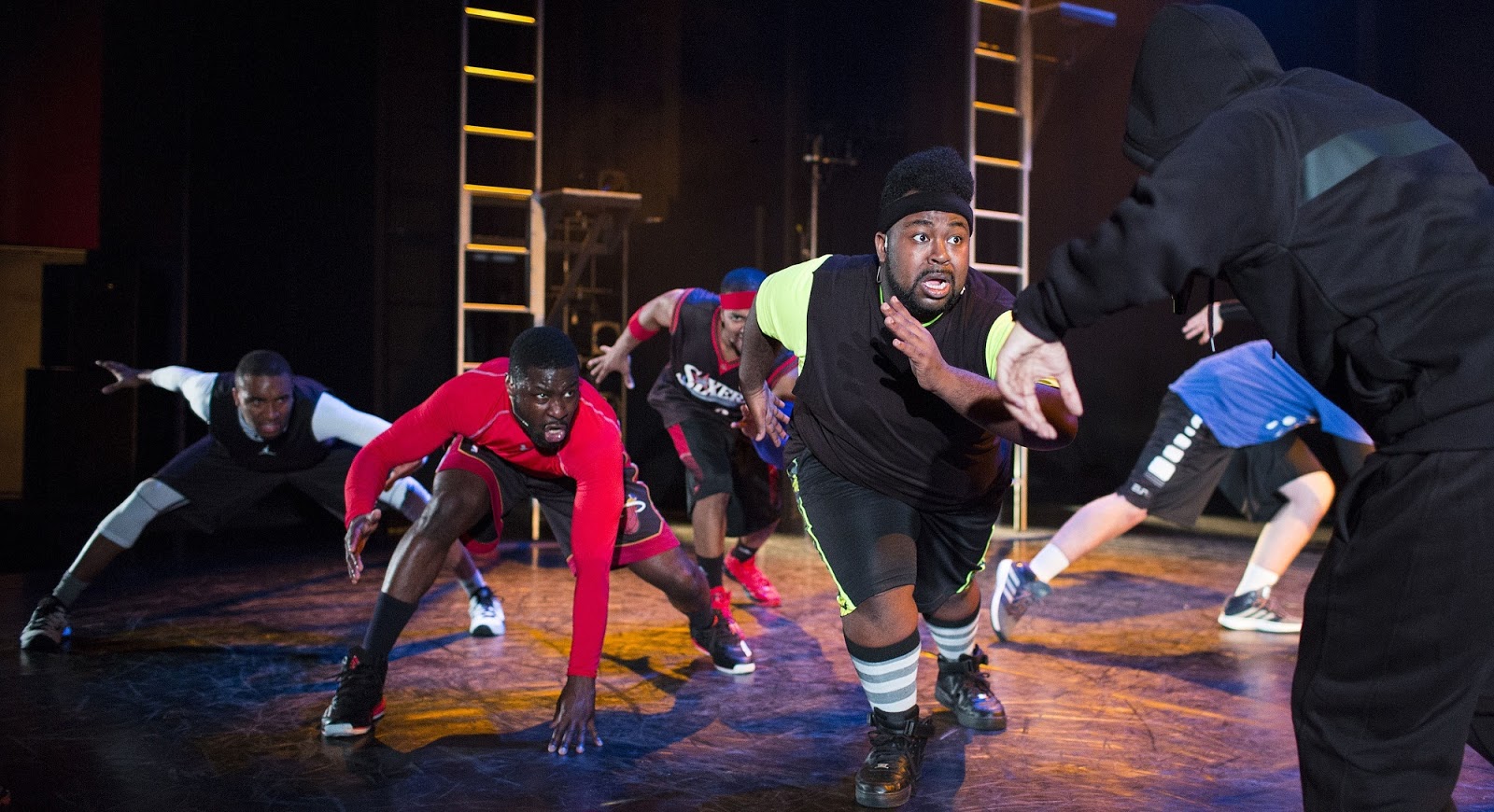 How much does context matter? On paper (i.e. *in press releases*), Spalding Suite is mostly being sold as the new piece by Inua Ellams. The programme goes on to list five other international poets whose work is included in piece. Nevertheless, this is ultimately a bit like selling the latest piece by Gisele Vienne as “the new Dennis Cooper”. Similarly, this is nominally a piece about basketball, a game about which, dear reader, you will be unsurprised to learn, I have not even the faintest clue. (I mean, I get the self-explanatory titular rudiments – there’ll be a basket and a ball – but...). So let’s chuck most of what we think we know out of the window and start again.

For my money, Spalding Suite is a difficult piece of non-linear, abstract contemporary performance, cunningly disguised as a relatively relatable piece about young men and basketball. By picking a game which already involves spectacular grace and movement, the splintering of movement into abstraction is given a get out of jail free card. In the same way, by having the soundtrack created live by human beatbox MC Zani, the piece gets away again with being able to present texturally dense, sonic soundscapes without seeming impossibly “arty”. And, by tethering the work of the five poets to an overarching narrative about a a five-a-side basketball team, some fiercely complex imagery and writing gets by without seeming wanky. Christ, at one point someone even invokes Prometheus and a raft of classical allusions and doesn’t alienate anyone. Which is a bloody clever trick, if you can manage it.

More striking than this, though, is the fact that this is a piece of performance/theatre/dance that manages to put four young black men (out of five) on stage, in a piece about contemporary life, and not once make them discuss “issues” or patronise them. I’m not sure I’ve *ever* seen a show do that before. Former artistic directors of the Royal Court in particular might want to take a lot of notice. Instead of the usual litany of all-too-familiar casting options and tropes, the *issues* this basketball team have to work their way through are, variously: lack-of-speed, being a boring player, vainty and rage, etc. It’s a relatable range of problems that cuts across class and race, and, mercifully, also has application beyond sport.

But it’s director Benji Reid’s the choreography and stage-pictures that are the real stars here. Inspired seemingly by everything from basketball itself to computer games, slow-motion replays, via architecture, geometary, and probably some abstruse sport theory of which I know nothing, the movement here is precisely everything that I moaned about Shooting With Light lacking.

At the start of the piece I asked about context. And it is an interesting, crucial point. Spalding Suite opened at Contact last week. This week it’s going to the Southbank Centre for its “World Premiere” (their press release: the South Bank Centre really do seem to believe that nothing that happens outside London actually counts). I have no idea how it’ll do there, or who’ll go to see it. It doesn’t seem unfair to suggest, though, that the South Bank Centre is less *at the heart of a community* than Contact. It seems likely that the piece will have a more white, more middle class, much older audience than the majority young black audience it had in Manchester. *And*, if anyone can find a Chicken Tikka Kebab for £3.00 within a minute of the South Bank Centre, I’ll give them a tenner.