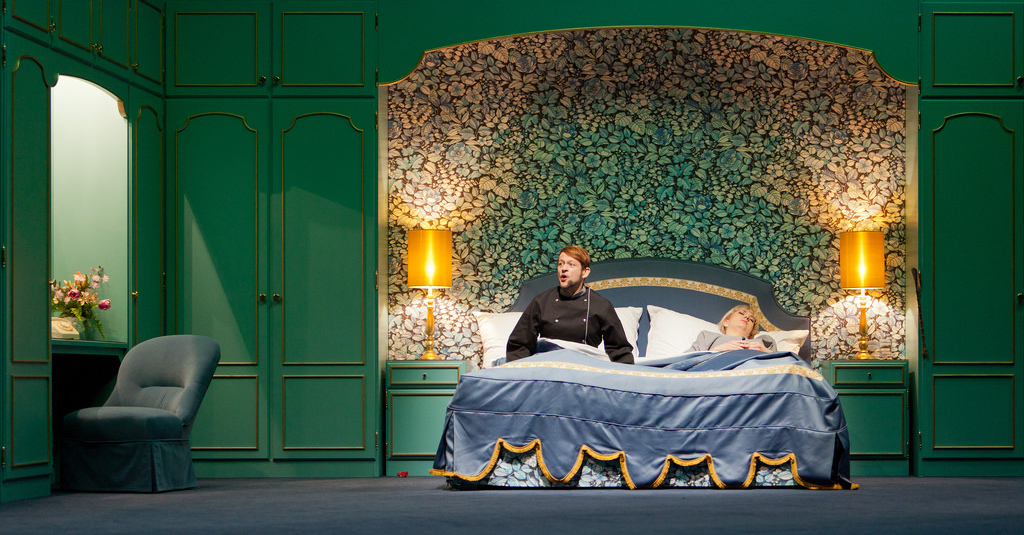 I’m pretty sure King Size doesn’t need a lot of writing about (well, either it needs very little or a doctoral thesis). It’s billed as a Liederabend (song evening), and that’s precisely what it is. On a faintly ridiculous set (a diagonal half of a very seventies looking hotel room decorated in garish, floral blue), four faintly ridiculous figures sing a pretty ridiculous selection of songs (from Wagner to Münchener Freiheit via Stephen Sondheim, Alban Berg, John Dowland and the Jackson Five). There’s a faint theme of sleeplessness and romantic separation, but to call it a story would be pushing it.

What there really is, though, is *a lot* of incredible silliness. Brilliant, brilliant silliness. I laughed until I cried. At least twice. Marthaler really has a talent for the absurd, and when the absurdity is offset by incredibly beautiful music it’s all the funnier.

In the interests of not spoilering it, I suggest you just get a (cheap) ticket and get yourself along. It’s probably the most uncomplicatedly, lovely, fun hour and a quarter I’ve spent in a theatre in an aeon. It managed to completely bypass the normal “critical commentary” soundtrack that seems to run alongside most things I see. It’s even practically *a musical* (!) for heaven’s sake. But, yes, love.
___

Under the below photo, I might describe a couple of things that happen and arrange a few YouTube videos so that a) I can remember the show in future, and b) people who don’t get to it have some idea what we’re talking about... 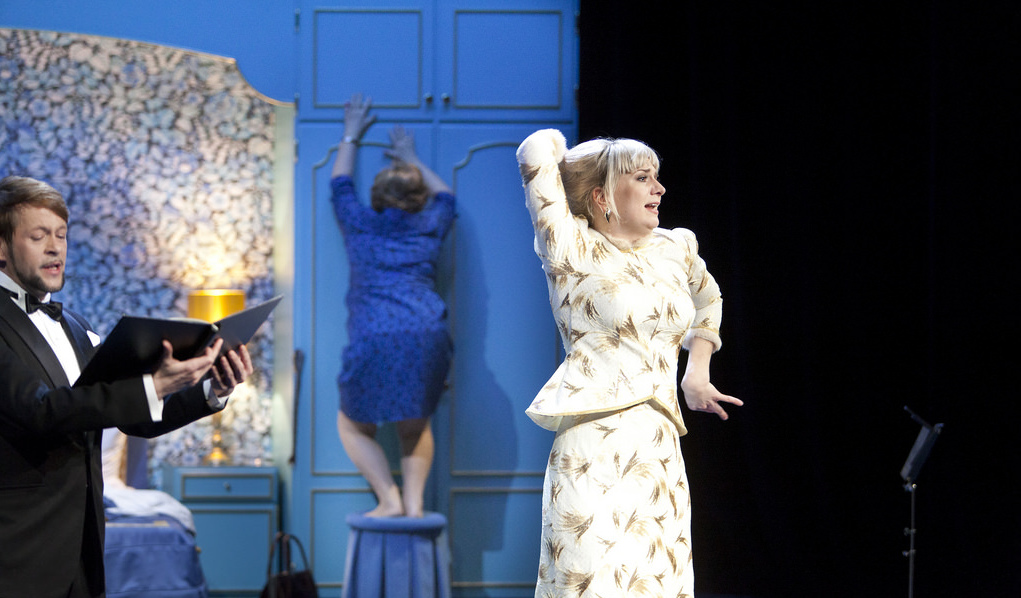 So, what happens is, a bloke comes into the room, undresses, takes a quick shower, dresses in new clothes, and then goes to the piano. Two hotel attendants enter, separately, make the bed, then unmake the bed, then lie in it. All this while singing (if I recall correctly). While lying in bed singing an older, matronly woman (old enough to be either of their mothers? Perhaps deliberate Freudian symbolism?) inexplicably crosses the room. From hereon in, the action becomes entirely fantastical and improbable. Like a series of dream-sequences, occasionally retiring to the bed again. The older woman at one point sets up a music stand, at another the hotel minibar is discovered in an impossibly high-up wardrobe cupboard. But, better, at another point she just starts inexplicably spooning spaghetti out of her handbag with a back scratcher, or, later, throwing bit of lettuce out of it onto to floor while the hotel maid lies front-down on the floor singing John Dowland’s Come, Heavy Sleep and eating the lettuce off the floor without any hands. And even in the midst of this, it *still* manages to be incredibly touching at points. I have literally no idea how Marthaler comes up with this stuff, but I think it’s a concept that maybe even borders on genius at times, and I’m bloody glad he does do it, and that the ROH have the guts to transfer something so entirely nuts. Brilliant.

Some of the music (almost all arranged for a single piano, and often in German, in the show):