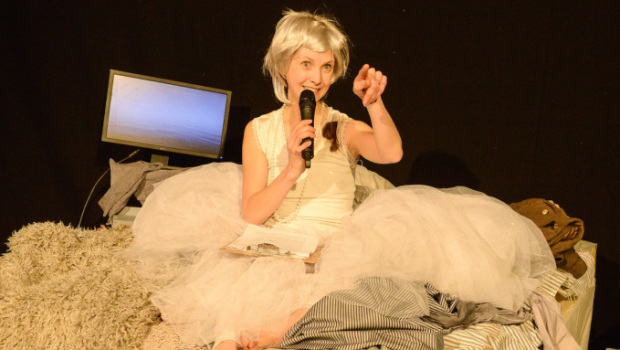 The more you look at it, the more you notice that the basic plots of Greek mythology are a car crash. Granted, making play of this fact has been a staple of drama since its inception, with Euripides using the fall of Troy or the civil strife between Oedipus’s sons as the stick with which to beat his native Athens’s conduct in the Peloponnesian War. Nevertheless, there is still much mileage in interrogating the mad nonsense that is *still* sold to us in childhood as heroism.

Caroline Horton’s (hour-long, one-woman-) show takes the relatively obvious step of giving a voice to “stay-at-home army-wife” Penelope and, largely just by restating all the simple facts we know about her as a personal narrative, demonstrates the ludicrous extent of the things we’re asked to think are probably somehow *okay* when we’re concentrating on her husband’s exploits. Yes, it’s been done before (Margaret Atwood’s Penelopiad, which was even adapted for stage by RSC back in the mists of time), but this version was specifically commissioned by Derby Playhouse – to balance out their main-stage, WWI-costumed version of Homer’s Odyssey last February (although, adaptor Mike Kenny, being an intelligent chap, seems to have avoided the worst excesses of Boy’s Own jingoism and sexism in his own version too).

Horton’s show has more than enough to recommend it as a stand-alone piece, however. (And it’s interesting to note that is piece was made almost a year *before* her recent, controversial piece Islands, on which the majority of critics fell, outraged that she was doing something different to that which she had previously done. Penelope Retold sees Horton return to what could be superficially characterised as the fluffy, charming, reassuring stage persona previously adopted in Mess. However, as with Mess, it would a spectacular oversight to miss the Beckettian steel behind the winning smile. And, interestingly, as with Mess, we once again meet Horton, Winnie-like, almost buried up to her waist: here in Penelope’s marital bed.

The main problem with writing about ...Retold is that it mostly requires just writing about performing. Which is bloody difficult. Partly because it’s such an intangible thing; then because it’s so subjective (a fact always complicated when it’s a male writer describing a female performer, since *any* physical description *at all* – no matter how bland or fact-based – inevitably looks suspect on some level); and lastly because it usually ends up in the same horrible pile-up of adjectives (“brilliant” and “luminous” tend to be the worst offenders). Horton *is* brilliant, but saying *how* seems somewhere between impossible and too obvious. First of all there’s the liveness and the assurance: as soon as she pops up out of the bed, she makes eye-contact with what feels like the entire audience. We’re not worried about the fact that she’s got to carry the next hour single-handed. And she’s definitely in the same room as us. There isn’t that daft idea that even though we’re only a couple of metres away, she’s going to pretend we aren’t there (although, I think we, the audience, perhaps swap roles more times than Horton, which can be momentarily disconcerting). Then there’s her comic timing. I think more-or-less the first thing Horton does after standing up and looking around is to fall over. Which is very funny (I’m a complete child when it comes to people suddenly falling over). But, time and time again, Horton gives these perfectly judged little looks, which seem to happen so very rarely on stage (God knows why rarely), to us, to herself, whatever the situation requires: so there’s this constant self-aware rapport, which makes the character seem all the more credibly human, alive and relatable. And then there’s Horton’s voice, which is (at least for me – blame my upbringing) resolutely RP-but-not-alienatingly-*posh*, but used with deadly, melodic precision; more instrument than tool (if that distinction makes sense to you).

All of this is pressed into service of an incredibly well-written script (Horton again). Although, if one had to find a criticism (and ‘one’ really doesn’t: none of what follows remotely impacts on “one’s” enjoyment), perhaps the piece keeps too many different ways of viewing the story up in the air throughout, flitting from a satire about army wives conniving at their own oppression, general broken-hearted-ness at betrayal, the central debunking of Odysseus’s “heroism” and feminist critique of the myth, the slightly-less-relatable-in-modern-times idea that 35 is an age at which one is “past it”, as well as the most compelling component: the cold-light-of-day (quite literally in __ __’s lighting design) retelling of the story of a 35-year-old woman waking up to discover that her husband of 20 years – of which he was absent for the last 19 – has returned home and murdered all the men in her house except their son and twelve of her female servants. Which, looked at like that, is pretty difficult to spin as heroic. However, it’s also precisely this multipicity that also adds to the piece’s enormous watchability.