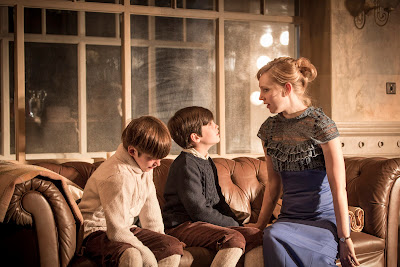 Carrie Cracknell's production of A Doll's House opens with a set. It's designed by Ian McNeil, who is most famous for the exploding doll's house set that he designed for Stephen Daldry's apparently unstoppable production of An Inspector Calls. McNeil doubtless kicked himself for having already shot his small-house-onstage bolt when he was asked to design this.

Here, McNeil has created a four-rooms-on-a-revolve set. It'd be disingenuous of me not to note that this immediately recalls the revolving rooms set used in Thomas Ostermeier's production of Hedda Gabler (and apparently also his Nora), except here the Scandi-Teutonic modern minimalism of the rooms is replaced by an interesting take on the period drama set. It doesn't look like detailed, historical accuracy, so much as one of those themed features you get in the magazines of Sunday newspapers – this one with the theme “Make your house look a bit C19th Norway”. Also interesting is the idea that the rooms on this set don't seem to exactly correspond to where they are meant to be in the “actual” house (although I could be wrong about this), but rather have windows between room which I think are intended to be looking out in another direction than into the next room.

These windows, do also, of course, make it much easier for us, the audience, to see through the house and for the production team to light it (although, by press night, they could have done with a bit of Windolene...). Also, re: the windows – and this only occurred to me this morning – while the tenement block staircase outside the flat is painstakingly accurate, I did wonder if the windows here weren't actually a bit Barrett-Homesy and small. Granted, I've done no research into C19th Norwegian tenement architecture, but I did wonder if this was actually a deliberate attempt to further the feeling of suburban familiarity initiated by the Sunday Times Style Section décor. Indeed, there are points, especially when the revolve moves, and Stuart Earl's dramatic-but-perhaps-a-bit-unnecessary score plays, where the whole looks a bit like a John Lewis advert going very badly awry.

I say this with admiration. This setting is fundamental to what's really great about this production; namely, the way that it seems to almost float between time periods. Essentially, none of the names or details have been changed. We're nominally in Norway in the 1870s, but at the same time the language used feels incredibly familiar; the setting, as I've said, looks recognisable; and the way that Nora and Torvald (Hattie Morahan and Dominic Rowan) relate to each other feels particularly contemporary. This is no stiff-necked Victorian relationship, but outwardly at least, quite a modern, touchy-feely, flirty, loving relationship. Ok, so Torvald is kinda patronising, and his habit of using fauna-based pet-names klangs a bit. In the first few pages alone, Nora is variously: “a little swallow”, “a chaffinch fluttering”, “my little hamster”, “like a little girl”, and “my little skylark”. It's almost like Ibsen is trying to tell us something.

And, in a funny way, this is sort of a problem that the success of the rest of Cracknell and Stephens's approach sets up for them.  Now, as far as I can tell/remember, Simon Stephens's New English Language Version doesn't deviate really from what Ibsen wrote. Not in terms of plot, or really in terms of what people say, or the order in which they say it. It's manifestly an incredibly playable translation, and while it actually looks quite normal on the page, the fluency with which the actors inhabit it prove it to be an incredibly thorough bit of work.

However, even this fluency causes the odd difficulty later on. That difficulty being: having made everything so clear, the situation so sympathetic, and all the characters really quite likeable – apart from Torvald's occasional Ibsen-prescribed moralistic moments – the final crunch moment, the moment when Torvald's mask slips, seems to hurtle in from a lot further away and impact a lot more uncomfortably than if the whole thing had seemed more remote from the start.

It's a difficult dilemma, because this really is a brilliant production. Even this “problem” I'm describing doesn't get in the way of enjoying the thing (if “enjoying” is ever the word for watching characters' lives crash down around their ears). But it does make you (me) wish that Cracknell/Stephens had done a bit more of a number on the script – maybe massaging some of Torvald's arguments – translating them, not only into English words, but into contemporary concepts. Basically, daring to make Torvald not seem unreasonable and ludicrous, which here, despite also having been quite likeable, he definitely does. (It surely can't hurt Torvald's case that in Rowan's performance he comes off not unlike Colin Firth's Mr Darcy.)

At the same time, you appreciate why they haven't. And actually, the remoteness of Torvald's arguments in this context is comforting, although that in itself could be seen to be problematic. For these reasons, you wind up with a production that does let you think (if you're bothering to ponder the socio-economic implications in the midst of all this human drama) about the extent to which the problems of these characters are primarily problems of their society much more than problems of their own making. Perhaps Ibsen's genius here is making it feel all the way through as if this is a story about personal agency and “wrong choices” when in fact it is an object lesson in how people get left with no choices at all. (Although, at every turn, this point is arguable.)

After all, in the first scene, if Torvald comes across as a bit patronising, then Nora doesn't present too well either; constantly harping on about money and coming across as a slightly ditsy spendthrift. Of course, we learn gradually that these are all elements of an elaborate façade that she's built up over the years. But then, while that's an act built up to service the repayment of the debt which she owes to Krogstad, undertaken to pay for an expensive trip to save her husband's life; at the same time, the way she tells it to Kristine (perhaps due in part to Monahan's performance here), she makes it sound like it was her “excitement at spending money” that made Torvald ill in the first place.

So, there's an interesting counter-reading available that suggests that Torvald is a man making the best of a ludicrously bad job; putting just as brave a face on his situation as Nora has on hers. She by pretending to be a childish creature and he by naming her after little creatures and doting on her.

I wonder how much of this reading is already present in this production, however. And how much of that is down to Morahan's extraordinary performance within it. It's chief virtue is its intensity. This is, after all, a portrayal of someone who, at the end, says she has been acting for the past nine years, and Morahan doesn't stint on demonstrating what a strain this is. Her Nora is as highly strung as a deposed dictator. Even before her situation begins to fly out of her control, she seems in a state of advanced panic. Perhaps there's something in Torvald's positing her as a hamster – a creature whose heart-rate is roughly nine time faster than that of the average human. Interestingly, you see it most when she is trying or pretending to be calm, Morahan's does a great line in wide-eyed staring, especially when she's looking out into the audience over the shoulder of someone embracing her.

At the same time, Morahan shouldn't get all the acting credit here. Rowan, although spending a lot of time boxed into giving Morahan's Nora something to play against, also turns in an excellent and very funny “drunk scene”, when the pair return from the party in an upstairs apartment. Similarly, Nick Fletcher's Nils Krogstad is a fine study in snide menace; an object lesson in how not to turn slightly reedy, nasal hectoring into a a caricature E.L. Wisty jobsworth. When Kristine Linde (Susannah Wise) finally returns the affection that she withdrew all those years previously, we are almost shown all the decency and humanity flooding back into the parched wasteland of his interior life.

And it certainly seems to be the acting that Cracknell appears to have focussed on. Apart from one beautifully luminous moment just before the interval, where Nora dances her Tarantella until it becomes a kind of spastic Pina Bausch homage, there is little to frighten the horses (and by horses, I mean dinosaurs) here. Instead of a big concept making suggestions to us, we're relatively free to mentally wonder round this Doll's House.

As a result, what I thought I noticed most was how well-turned a machine it is. Ibsen, like Chekhov, is incredibly cruel to his characters. And it's their predicaments that really draw us into the play. Ultimately, this isn't about “men and women”, but about desperation and panic. It doesn't feel like Ibsen is trying to sell us the hokey theory of hereditary morality that Torvald espouses (although he might have believed them himself (cf. The ideological patterns debunked in Not in Our Genes) ) any more than Nora's glancingly astute comment that “Thousands and thousands and thousands of woman have [sacrificed their honour for the person they love]” is the *point* of the play.

Watching this play, from 1870, in this clean, unshowily modern-looking, modern-sounding production, I did wonder whether you really do get a “proper” sense of the play from this production; or whether it's a lot more of a *take* on the play than I'd been giving it credit for.

What I find most strange about us all staging Ibsen now, over a decade into the 21st century, however, is this: Ibsen's social conscience and grasp of human predicaments were so ahead of his time that they feel contemporary now. However, the society and situations to which he applied them feel so remote that it feels like what we are watching now, when we watch Ibsen, is almost a kind of contemporary humanist, science fiction warning against the troubles of a future society.

Cracknell's production is great because it makes us think of the bad old day of the Victorians, and properly institutionalised laws that discriminated against women (God knows there are still problems now, but we should also recognise the progress that has been made since then). It shows us quite a plausible, contemporary-seeming couple, and then at the end it explodes with this tirade from the past into our present. It's essentially a production about the re-election of the Conservative Party – horrible ideas from the past crashing back into progressive, contemporary life.

It is a truism that science fiction is always really about the present. It strikes me that “contemporary drama” is almost always actually about the past. I wonder, then, if it is in “classic texts” that we catch glimpses of the future. 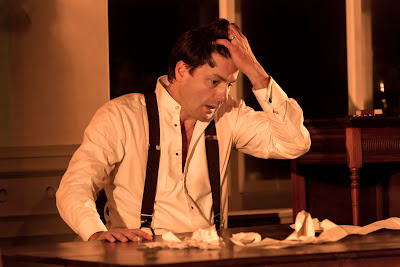