Am I – Spotlites @ Merchants Hall 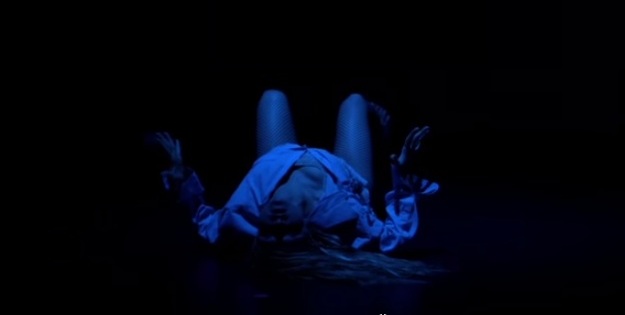 Continuing my day of dance/physical theatre, picked largely at random from the first couple of pages of the section in the Fringe guide, we come to Am I. And it turns out to be a piece of danc-theatre about sex trafficking. Perhaps – following on from Theatre With Teeth’s dance version of Posh, we might like to consider this as the dance version of Three Kingdoms.

As it happens, I did end up spending a large amount of time thinking about Three Kingdoms through the show, largely because, post-Birdland, and then post-Streetcar..., I’d been party to a couple of *those conversations* about Whether The Plays of Simon Stephens are Misogynist. Interestingly, the thing that And I highlighted for me about Three Kingdoms was what an original bit of thinking 3K actually was. Put simply, I think I’ve seen Am I in various guises about a million times now. It tells the story of one trafficked woman, and is based on a “Sunday Times Bestseller”. What is striking is that the story of one trafficked woman tends to be the same as any other story. There is essentially next to no variation in the story. As someone recently noted about the stories of Holocaust survivors, it’s an awkward fact that *all* the stories are the same, and fatigue sets in at a certain point. As such, Am I is literally no different at all from Bodies in Transit which I saw on the Fringe eight years ago. It’s a difficult observation to make. Obviously. It also made me realise why Three Kingdoms was so interesting. At the time, one of the sticks used to beat it was that the women in it were largely voiceless: silent, doe-eyed (literally), victims. Actually, in theatrical terms at least, seeing this show I was reminded that I’d seen those “voiceless” women’s stories about a million times before, and since. And that 3K was unique in that it was attacking sex-trafficking as a male problem, as a power structure, and rather than telling a story which enforces the idea of women as victims – much like those “Don’t Get Raped” campaigns – it was tackling the real problem: the men who perpetuate the trade, both traffickers and customers – the wished-for equivalent of a “Don’t Rape” poster campaign.

Thinking about Am I through the prism of the criticism that was levelled at 3K, you also notice again another problem of portraying the sex industry (or the rape industry as it might be better termed) – that is: the objectification of women. In Am I, the audience is invited to watch five twenty-something women dancing in fishnet hold-ups, underwear and lacy tops for an hour and ten minutes. There’s also a cute, Italian(?) boy with a floppy fringe and undercut playing their improbable pimp. The dance routines they perform are frequently what could be described as barely-disguised, barely-stylised lap-dance club style-stuff, grinding pelvises against their chairs, and thrusting themselves about this way and that. It wouldn’t take a great leap of imagination for blokes who were so inclined to find the show mildly erotic.  And not in any way that would be useful to the furtherance of the pieces undoubtedly noble aims. And this is Am I’s problem – a problem throughout of stultifying literalism. If a woman has been dressed as a sex-worker by her pimp, then so is the dancer. If the woman is forced to perform “sexy” dances, then so does the dancer. And so on. (All, incidentally, to a soundtrack composed largely of what sounds like bad Nine Inch Nails off-cuts from the point in the band’s history where they stopped being an interesting industrial band and started being a dull, sludgy metal cabaret act.)

As such, I would say Am I more or less entirely fails its subject. The visual literalism means that all we’re looking at is a representation with no interpretation or analysis. The passages of the book which are read out, while miserable and appalling (obviously), also add nothing more than a key to *explaining* the dance moves we already understand. And, where the violence is necessarily stylised, it simply doesn’t connect with the audience on any visceral level. Where this should be a piece of theatre that is should be near-unwatchable because of the sheer level of human misery, violence and suffering involved, instead it is close to unwatchable both because of its failure to communicate this, and the point-blank fact of its lack of imagination in the choreography and presentation.

It’s only fair to mention that all six dancers are clearly capable of more and better, and I imagine the choreographer is young enough for this work to still count as developmental. For their work to blossom, I’d say that a greater understanding of how dance can actually communicate as a medium is needed. Rather than a mimetic walk-through of what happened using moves we’ve all seen a million times before, there needs to be an appreciation of the power that abstraction can bring.
Posted by Andrew Haydon at 10:16