Amongst Millions – Paradise in the Vault 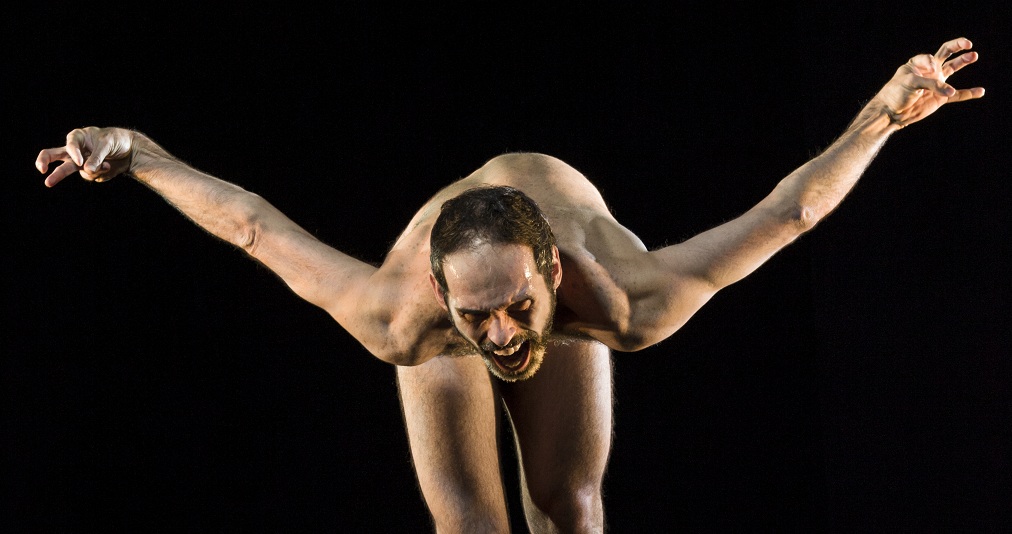 What it is, is a piece of contemporary dance – and, at last, contemporary dance in the sense that I understand it; that is to say: the sort of thing that people who like ballet walk out of, saying “he hardly moved at all.” – in which the solo performer (and self-choreographer) Pedro Goucha Gomes stands naked in a spotlight for half an hour. Perhaps twice, achingly slowly, he gradually collapses to the floor. In short, the “action” of Amongst Millions is simply the act of watching an unclothed human body tense, writhe, shudder, and spasm, over and over again, for 30 minutes.

As an aid to this, the piece also has an immense sonic landscape composed by MiguelAngel Clerc. The “music” (and this is to music what the dance is to ballet) is also properly stunning (again, if you like that sort of thing. No one’s judging you if you don’t. I think I’m explaining this clearly enough for people to make up their own minds...). It seems to come from the lineage of Sunn O))) with maybe a hint of a screechy power-electronics influence. For the first few minutes, you knew there was music, but it was almost inaudible as sound. It was something playing at so low a frequency that you first really became aware of it because it was rattling every loose metal fitting in the small, narrow, ascetic room where the piece plays.

Writing analytically about such minimalist work feels – in the abstract – like it ought to be intensely difficult. Like, in theory, all you’ve got is one silent, naked human body, and “no plot”. In the event, here, it feels as if, if anything, at points Gomes actually gets a bit too demonstrative and explain-y. Only maybe twice, but even so, it’s there. Admittedly, obviously, this is just my take on the thing, but to me it felt like the piece presented a really clear set of, well, pointers to direct how you thought about this theoretically opaque, abstact thing. For a start, Gomes doesn’t even smile until about twenty minutes into the piece. And even then it’s only brief, and too forced to represent pleasure. Instead what we mostly see if either a staring blankness or else rictuses of agony.

As a whole, the piece feels like spending half an hour in front of an animate painting by Francis Bacon or Egon Schiele. What’s remarkable about it, is the way that watching it feels like it’s almost clearing your head – or rather, by forcing you to concentrate so intently on one thing, that it’s like giving your mind a good scrub. Everything else somehow gets replaced (well, this is my experience anyway) by the analytical soundtrack in your head. Precisely because of the lack of any narrative to distract you, you’re constantly writing your own script, story, interpretation of what’s happening in front of you. The whole thing feels like an almost audible exercise in highlighting the human tendency toward explication because that’s what you hear yourself doing, loudly, internally, for its entire duration.

The precision and skill with which the movement is executed is somehow incredibly reassuring. As if it’s the most normal thing in the world to sit for half an hour concentrating hard on the nude male form. Gomes’s body itself – obviously that of a trained dancer – also exercises a strange fascination (not least for this out-of-shape critic, among whose more banal thoughts might, more than once, have been the reflection: “wow. I really need to do some more exercise”): because it is so *trained*, it’s almost not like a human body at all, so much as a perfectly tuned machine. All the muscles – not overdone, not ludicrously, steroid-y, but functional; existing to perform difficult physical tasks with ease – look like they’re in optimum shape, this is more like considering sculpture than a person. (Which, reading back, sounds like it’s “less human” as a result, my point is somehow partly the opposite: that Art is more “person” than an actual “person” would be (cf. Am I).

Overall, playing at 19.30, and tucked away in the Vaults venue, off that street which curls up from the Grassmarket to Bedlam, this show feels like a real break from the normal run of the Fringe – a kind of mental spa, crossed with a vigorous workout for the synapses. Like I say, it might not be for everyone, and aficionados of this sort of work might have their own specific issues with it, but for me, it was a case of exactly what was needed at exactly the right moment: muted, subtle virtuosity that trusts an audience to understand properly difficult work.
Posted by Andrew Haydon at 12:58