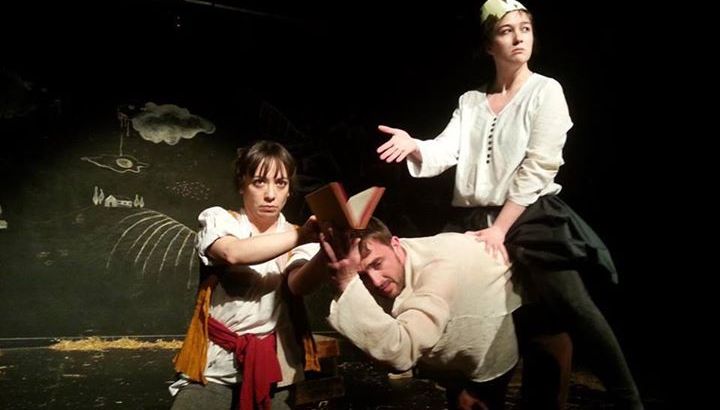 A radical, post-modern, punk-rock Don Quixote was the first thing I saw in a theatre this year, and for some reason its combination of anger and charm was just what I needed in rainy, early January. Fast forward to August and my first entirely random show in Edinburgh turns out to be another Don Quixote. And, once again, it turns out to be exactly what I needed.

The first thing to say about Little Soldier is that they might be the straight-up funniest, most charming theatre company I’ve come across in an age. They’re also stupidly talented (one of them plays the Spanish guitar more or less constantly throughout and it’s so perfect you keep forgetting it’s there, and then remembering and being impressed all over again). They’re three-quarters Spanish, three-quarters female company, with a token English Bloke (who, as if just for my own extra amusement, looks startlingly like a young Jeremy Herrin).

Their M.O. is, well, if it wasn’t this funny then it would be “clowning”. But here it’s actually, genuinely warm and for some reason irresistibly funny. Oddly this feels in part like it might be down to the fact that they have such a brilliant selection of faces. (God, writing about things that make you laugh is weird.) They’ve also totally nailed the right ratio of filth, mucking about, surrealism and actually getting down to telling (some of) the n-hundred-page narrative. Obviously Don Quixote is a really stupid book. It’s ridiculous. Some of the episodes they bring to the stage include: the bit where Don Quixote kills a whole field of sheep because he thinks they’re an army; the bit where Don Quixote encounters a psychic monkey; the inevitable tilting at windmills and duel with the moon bit... It’s such a mad book, so playing it as – well, it’s not un-Python-like – seems to be as good and logical a solution as deconstructing it quite literally with a circular saw as the last lot did.

There’s a lovely moment about five minutes in when, having done the first scene, the company stop the whole thing for a “feedback session” and Q&A. It’s that sort of thing. They never stop looking at us. They’re totally performing *for* us. And while none of that’s new, finding it genuinely heart-warming, funny and compelling is much more rare.

It’s early days, but if everyone else likes them as much as I do, I think Little Soldier could well turn out to be one of this year’s real discoveries. (Unless everyone else has already discovered them and I’m just way behind the curve here...)
Posted by Andrew Haydon at 11:52