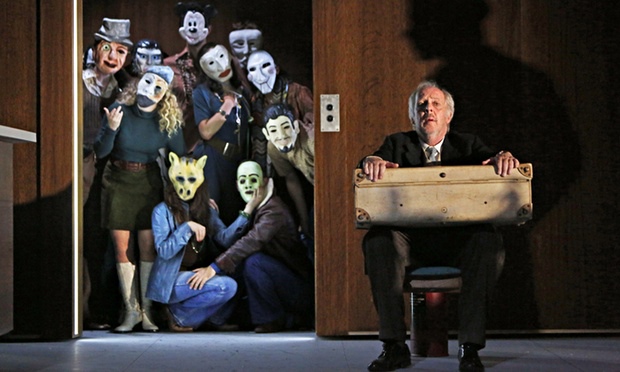 I’m starting to wonder if it’s really possible to translate Thomas Bernhard into English. Obviously it’s possible to translate the words into English, you might think. And I am thinking more about context. But even with the language I think there’s a weird little gulf where, writing in Austrian-German, Bernhard is making little word games and allusions which we simply can’t transpose into English. And without these little ironies the very dimension that made him one of Austria’s most successful playwrights falls into the little cracks between our languages. But then there is the cultural context too. I do often wonder if there’s a particular sort of amused detachment bordering on outright cruelty about the Austrian sense of humour. And, without being Austrian, watching or reading in English, my first reaction to Bernhard’s work is usually that he is just this appalling misanthrope. Which of course he is anyway. But beyond worrying about the blackness of Bernhard’s long-departed soul, there’s also the other cultural context: that of shared knowledge.

Minetti is (here) a 90 minute monologue, written in 1976 about the incredibly famous German actor Bernhard Minetti. In the original production, directed by the equally famous Claus Peymann when he was still at Schauspielhaus Bochum, the part of Minetti was played by Bernhard Minetti. Here, in Tom Cairns’s 2014 Edinburgh International Festival co-production sponsored by the US Embassy (what, no protests?), Minetti is played by Peter Eyre. So, *obviously* it made more sense in the original language with the part being played by the man it was written about. (This sort of thing seems part of Bernhard’s strangely misanthropic shtick. He later, I shit you not, went to write a piece called Claus Peymann kauft sich eine Hose und geht mit mir essen (Claus Peymann buys himself some trousers and goes out to eat with me). I saw it in Vienna at the Burgtheater with Peymann (still?) playing himself as a satirised, egomaniacal monster. And, yes, the title is entirely literal.) But, what I think is more crucial, is both the timing of the original, and this contemporary audience’s probable lack of knowledge of any of it.

The action of the piece – such as it is – sees Minetti pacing an hotel lobby on New Year’s Eve waiting to meet the artistic director of a (Rotterdam, was it?) theatre, who is to discuss with him the possibility of playing King Lear. Minetti exchanges a few words with a posh lady (Sian Philips) also waiting in the lobby, and occasionally a whole lift-full of young people charge out of the lift and out of the revolving lobby doors into the New Year night. Thus is Minetti cast as both a latter-day Lear railing and monologuing about “thirty years in the wilderness” because he “turned his back on the classics” and a less latter-day Vladmir or Estragon, solo, waiting for a Godot who we suspect will not turn up.

That  “thirty years” is crucial. Without knowing the date of the première, and the country of origin, it’d pass you by completely, but we’re looking at the thirty years post- 1945. Minetti might blame “turning his back on the classics” for his wilderness years, but history might more likely blame that fact that he played the lead in Hitler’s favourite modern play, Schlageter, in its performance in 1933 on Hitler’s birthday, and continued to perform as a leading German actor throughout the next twelve years: a kind of Nazi Laurence Olivier.

So we might say that “turning you back on the classics” is something of a euphemism. However. Not a jot of that seemed to be apparent in this production. I only worked it all out afterwards looking at Wikipedia. I might have been being dense, but I think not. I suspect that the translation is faithful to the *text*, and the text wouldn’t have needed to say anything in 1976. Not in Bochum to an audience only thirty years after the Nazi regime was ended. All but the very youngest theatregoer would have got exactly what Bernhard was needling them for. As such, how can a play specifically designed to needle an audience made up of the generations later labelled Hitler’s willing executioners, how can that play act on us now? Or, what should we take from it.

Oddly, it feels like there is a strange way in which it does still make a kind of sense, as a weirdly Germany-specific play about futility, the text takes on a kind of metaphysical Beckett-y quality. However, Cairns’s set – a beautiful, fully naturalistic, wood-panelled hotel lobby, seems to work vigorously against this possibility. As does Eyre's Very English, almost compulsively too-engaging performance.  Like, it would have been much easier if he’d just left the set out entirely, and Eyre had just barked at us from out of the blackness. But perhaps that’s the strange point – that he’s making us work at reinterpreting this thing which we already don’t understand properly. I’m almost inclined – a week down the line – to give him the benefit of the doubt.

There is a final image in which Eyre/Minetti finally dons the Lear-mask “designed by Ensor” (and it's only looking for a photo and checking who Ensor is that I realise that all the teenagers also have "masks by Ensor" - clever, if entirely lost on me at the time) as he’s been boasting throughout (and we get the impression that maybe Bernhard is being eye-rolling about this), and the set all suddenly flies out, and we’re left with Eyre/Minetti/Lear standing suddenly in pouring rain (oh, yes, they’ve got budgets at the International Festival), in this harrowing mask, and it is properly moving (I thought). At the time my reaction was: “Oh, you bastards. You never earned that. How dare your final image be so good.” Now I’m not so sure that the waiting mightn’t have been part of the point, and that, even though I doubt the original intent was transcendence, this production makes a valiant stab at entirely appropriating this text and making a case for it in an entirely new and alien context.
Posted by Andrew Haydon at 17:06