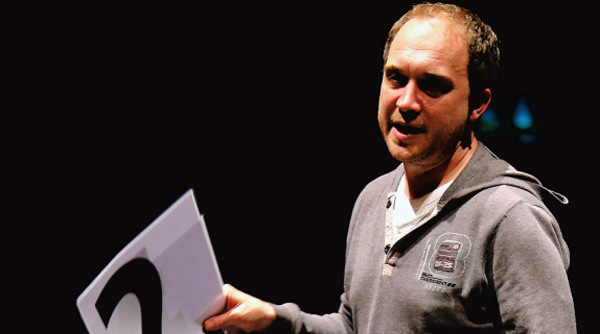 Chris Thorpe’s new play is essentially a piece for two voices performed by one man: Thorpe himself. It is directed by (and developed with) the luminously brilliant Rachel Chavkin from The TEAM. Although it’s as much a “performance lecture” as it is “a monologue” or “storytelling”.

It’s about confirmation bias, which, if you’ve not heard of it, is the scientific/psychology theory that states people tend to interpret facts and events in a way that confirms what they already think/believe. Chris is using it to explore the gulf in thinking between himself and the far-right. To this end, he’s sought out an intelligent, articulate, white-supremacist and had a series of conversations with them. Not because he wants to be converted, or because he wants to change their mind, but because, well, I suppose because he wants to understand them better. And understand himself better. And, well, obviously, he would want to do that because he’s a nice left-wing, liberal type.

At the start of the show – and I’m not going to give a blow-by-blow account, because the piece doesn’t really work like that – he’s describing going to a BNP meeting with some idiot BNP member. He’s finding it difficuly, and, strikingly, when they get the train home, he’s more socially embarrassed for the bloke he’s with than angered or challenged by him.

So he finds a new bloke. Online. And, yes, there is a weird, totally unacknowledged dimension where this show does also feel a bit like something about online dating, albeit, searching for verbatim subjects for a performance lecture on confirmation bias and the far right rather than a nice life partner/quick shag. In this it is a bit like Chris Goode’s Men in the Cities. Indeed, seeing the two on consecutive days really does make for a startling, sobering picture of the State of the Nation (or maybe The State of Men) nowadays. It’s also interesting to note in passing how – contra the idiot headline of Dominic Cavendish’s recent list-piece for the Torygraph occasioned by The Nether – theatre actually depicts or relates online meetings as a matter of unremarkable course these days. Thorpe performs, plays both parts of, several conversations before idly mentioning that they’re happening via Skype and he hasn’t met this guy in person yet (I think. Or another person. A person anyway).

The genius behind having Thorpe playing both himself and his “opposite” – his fair-right mirror image – is that it illustrates one of Thorpe’s convictions perfectly: that it’s only a matter of chance, or upbringing, or genetic inclination, or whatever, that made one of them right-wing and one of them left. Chris is even more generous than that. He is ceding that, really – even though he completely and totally believes that he’s right to believe what he does, and will use research and figures as back up to prove his point – he’s no more “right” in his analysis of a situation than the other guy, who will also use figures and facts as back-up. Even if the other guy’s interpretation of those facts or figures is, in Chris’s eyes, abhorrent and twisting them to their own purposes.

And it keeps going in this fashion, gradually showing us that no matter how much we might wish Chris were just objectively right, a lot of this stuff does tend to be a matter of opinion, even if scientific facts might seem to fall more on our side than that of the right wing (reality’s “well known liberal bias,” as Steve Colbert once amusingly suggested).

The results are chilling. Chris takes the piece to about as difficult a place, ethically, as I’ve ever seen a piece of theatre go...

... Because you don’t flirt with Holocaust denial lightly. And, Confirmation doesn’t flirt with it. Nor is it light. It is full, frank, and takes the piece right to the edge of how far any liberal audience is going to go before walking out. It conjures a holocaust-denier that Chris met, and David Irving, and the number 6,000,000. And it examines how articles of faith are not necessarily the precise same thing as the rigorously examined truth. (I should say, lest someone stumble across this review long after the show’s run has finished, that at no point does Chris even begin to deny the Holocaust. The question is the actual number of Jews murdered, and how obviously 6,000,000 is a rounded figure, and how legitimate historians and researchers now have a range of other numbers the lowest of which is goes down as far as 4,000,000 – Four Million – which is still a unique monstrosity in human history. And is probably too low a figure. But, it shows how the use of even that rounded number – “The Six Million” – plays to a certain tendency to want to belong and believe.

What’s fascinating about the conclusion of the piece is that it gets to a point where Chris backs away. Not entirely because he’s scared of what he might start to believe, but because he can’t contenance any more tolerence on his part. If the thing is an experiment into the boundaries of liberal values, often defined by and condemned for their constant attempts at “understanding”, Thorpe seems to reach his.

As such the piece (also like Men in the Cities) offers both a possible statement and a challenge. The statement could be: “People don’t change other people’s minds. Not much. Not often enough statistically to make it worth your while trying. And there’s no point in discussion, dialogue or debate. They don’t change anything. Now what are we going to do to change things?”

That is a possible statement made by the show. Or an available interpretation at the very least. (It is not a statement made explicitly.) Which sounds – to my left-liberal ears – like some sort of totalitarian maxim. As if, following on, the only logical conclusion is: we need to try a different tactic. A tactic that doesn’t involve “being understanding”.

Or it is asking a massive ask. It’s pointing to a near-Beckettian embrace of failure (“Try again, fail again, fail better”), or else an embrace of the Quixotic – carrying on because it’s valiant, and the thing you believe in, and the *right* thing to do (which Confirmation manages to make feel almost as dangerously right-wing).

It’s interesting. I know that a hour an a half or so of oratory is probably a bad thing to base life decisions on (at least, it didn’t work out well for the Germans – on which subject, this piece also completely refutes that lazy defence that “fascism couldn’t have happened in Britain because British oratory wouldn’t be up to it, or ‘we’re too ironical’ or something”. On that score we’re just lucky Thorpe *isn’t* a racist), but, in common with Ten Billion this contains enough science and argument to actually make you think slightly differently about the world after seeing it (which, paradoxically, rather defeats its suggestion that things don’t). I did come out feeling that bit happier about my own beliefs, and possibly not justifying them so much to people who didn’t agree. (Unintended consequence? My own biases or needs confirmed?)

But, for me (always “for me”, but much more foregroundedly so here), it also – in tandem, later, with Goode’s Men in the Cities – made me think again about what the Left, and Left resistance, might start to need to look like in the future.

Perhaps it’s allied with the current feeling swirling around in the air engendered by online feminism and the situation in Israel/Palestine, and the closure of that Israeli-government-funded show at the Underbelly by protestors, that a more militant, combative form of leftism is necessary. That the old-fashioned cliché of “Guardian readers” also being pacifists isn’t going to work any more.

Although, again possibly due to my own confirmation biases, it’s equally possible to read both pieces as appalled by this possibility. As neither piece has “a message” (at least that doctrine of lefty theatre remains) it’s impossible to say for sure. (And as a big old lefty myself, I whole-heartedly *approve*.) But what is clear is that this is a serious, and difficult, and thought-provoking piece of work. It is also, for the record, glorious use *of theatre* *as theatre*.

[also includes this song, which also isn't racist]
Posted by Andrew Haydon at 15:57