This is How We Die – Forest Fringe 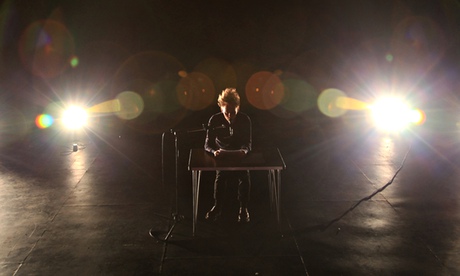 I’m sorry for this welter of positive reviews. Spine kinda re-energised my writing thing so I’m clearing the backlog and this is next up, and, well, hell, here’s a review I don’t feel equal to writing...

Meg Vaughan has already nailed reviewing This is How We Die so hard, that literally no one else need ever bother.

And, while I was watching the show, I kind of swore that all I’d do to review it was assemble YouTube clips that give some impression. And just open with the words:

“This is How We Die is basically Patti Smith reading The Story of The Eye, except it starts with writing that sounds like this:

then it turns into this:

But that won’t really do at all.

So: This is How We Die is the third part of the unofficial “Chris Trilogy About Men” (parts one and two there). Where Chris Thorpe’s Confirmation is the visceral lesson in theory, and Chris Goode’s Men in the Cities is the tender, thoughtful, evocative question, Chris Brett Bailey offers a kind of Howl as a conclusion. And, yes, the capitalisation is deliberate. If there’s a single other live event I could point to as a comparison it’d be the nights at Forest Fringe in 2008 where Chris Goode (perhaps coincidentally) read both his own poem An Introduction to Speed Reading and Alan Ginsburg’s Howl. This is possibly the finest bit of poetry I’ve seen live since that night.

This is How We Die opens with a contradiction: the cute observation that the cliché phrase “political correctness gone mad” absolutely contains its own refutation. And so does TiHWD. Attacking language throughout, it closes with the lines:

“and with our savage tongues
we lick our loved ones clean
we spray our enemies’ blood all up these walls,
and we pronounce this language dead.”

And, having just committed pretty much the best electric-shock resurrection of the language for the previous hour, I guess I don’t buy that [the English] language dead. But, fuck me, it’s so compellingly told that you absolutely do believe it at the time as the words dissolve into feedback, and guitars, and two amped violins and ten solid minutes of Monroe Transfer or Godspeed You-style post-rock riff, rage and feedback.

In between the opening and this sonically spectacular ending, the main body of the text relaxes, if that’s the word (it’s not), into a kind of fitful, fantastical, sexy, road-movie of a thing where the narrator and his girlfriend seem to travel to the edges of their minds on highways from American films lined with cool jokes and wry puns and peopled with, like, a smoking mouse, a human Swastika (literally), and a murdered priest.

Maddy Costa, it turns out (I’ve literally just paused writing this to read that), has knocked up the best actual analysis of what the thing is plausibly “saying”, which is well worth a read if you’re into meanings. I read the script of TiHWD just to remind myself of how it went, but really *didn’t* want this writing/review to turn into lit.crit. Don’t get me wrong, I don’t think Maddy’s wrong to do it, or that the piece is resistant to it – quite the reverse, Maddy’s prising it open and considering the words and how they mean, make the text shine all the more brightly. But it’s not at all how I experienced the show. Instead, I was letting it wash over me, sense, seeming nonsense, and narrative, all conjuring these glorious postmodern filmic images of sex and violence and a kind of idea of a teenage freedom that no teenager could ever hope to either describe or appreciate fully.

Reading other reviews also makes me realise I haven’t covered the basics. Partly because half of them seem obvious: Chris Brett Bailey looks like he always looks and I’ve known him for ages; and *of course* he’s sitting at a desk talking into a mike with the script also on the desk, who isn’t these days?, etc. And the other half – whatever I was thinking of when I opened this sentence – are... Whatever.

But, yes. This is *one of those shows*. One of those shows that we’re all going to oversell to you, dear reader, and you’ll presumably not be able to like quite as much as “us” for having read and imagined it first. So, unread this review. Forget it ever happened, book a ticket for it in October at the BAC, and go and be completely surprised.

Maybe there’s something in this: “this language [is] dead” thing after all.

Saw the show, loved it - is there any where I can get hold of the script? (Personal use)