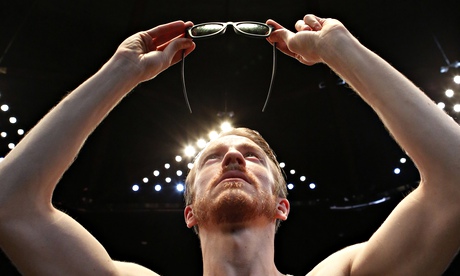 Is Mark Ravenhill Britain’s best science fiction theatre writer? Show Six adds another compelling, urgent play to the Yes camp. Show Six, directed by the excellent Caroline Steinbeis and performed in Paines Plough’s newly tarted-up Roundabout space – itself looking not unlike something out of Blakes 7 – is a kind of classical dystopia. Or, put another way: Oedipus meets Dr Who.

A young man (Stevie Webb, white singlet and gold lamé Kylie shorts) has driven his car into “a chav” in “the favela”, but the “chav” has not died. Instead, the young man gets out of the car with the hope of finishing him off, but the “chav” whispers something in the young man’s ear that causes him to go back to his car, speed off, while still “monged” on drugs from his dealer, and later record a twenty-minute crying jag where he screams “Who am I?” over and over again. Cut to a scene with his bad slinky mother (newest Secret Theatre company member, Matti Houghton, in a frankly devastating white bathing costume and red high heels), reassuring him and spelling out the realities of the Brave New World to us in the audience. Drugs are commonplace, she’s got a friend’s dealer on speed-dial. These are the complacent rich. A J.G. Ballardian über-elite: privileged, armed, rich and powerful without consequence. Webb and his friend (girlfriend? – Cara Horgan in a black bathing costume) go off to find the “chav” that the young man ran down. In a seamless scene change, Horgan is now “the chav” and Webb is pleading with him to tell him what he said to him last night. Suddenly the “chav” reveals that the young man’s mother is not his real mother. That he is not who he thinks he is. And so on. That the old(ish) “chav” wears sunglasses and walks in a fashion suggestive of blindness should perhaps make us all think “Aha, Tiresias!” That the young man’s (now presumed-adoptive) mother is all over him, and that he’s nearly killed some guy he doesn’t know at the cross-roads in the favela... Oh, you get the point. The old “chav” tells the young man about a right-wing military coup which his real parents were on the wrong side of. The young man begins to real to recall his former childhood, which seems to have been drugged and influenced and lied away from him; a childhood of workers’ rights and conversations about “the nascent power of the proletariat”.

The world Ravenhill conjures is classic sci-fi, indeed, the whole feels like it’s just missing the bit where the Doctor comes in and sorts it all out. It also feels like an amalgamation of numerous coups, state atrocities, and power-grabs: the favelas of Brazil, the forced adoption of aborigine children in Australia, the coup against the Allende regime in Chile, but also the recent catastrophes in Egypt and Syria. At the same time, the sclerosis-rigid class system suggests modern Britain as much as anywhere, with a demonised, and now free-to-murder underclass.

There’s much to admire here, both in Ravenhill’s script and in Steinbeis’s production, the three Secret Theatre ensemble performers, all here at the top of their respective games. It’s interesting to finally see an ST show which *doesn’t* make use (however small) of all ten performers. And, while we might mourn the resultant lack of diversity (although as Chris Goode pointed out at Northern Stage yesterday, you can’t really represent diversity with two people. Or three, I’d suggest) and the loss of company’s previous commitment to gender-, race-, and disability-blind casting, I guess it streamlines the comprehension process for prospective audiences in what is only a short piece with plenty of other potential theatrical confusions for the potentially wider range of punters found in Edinburgh.

It is good, though, to finally see (having admittedly missed Show Four), the ST team doing a new piece of writing for theatre that seems in line with their modernist and socially aware origins (no, social-stereotype-reinforcing farces about the death penalty which accidentally come out in favour of it *don’t* count, no matter how much one brings the iron up at the end).

So, yes, beguilingly inconclusive, admirably global and, ahem, “continental”, and as sleek and stylish as anyone could hope for, Ravenhill, Steinbeis and Secret Theatre make for a fine way of worrying more about the state of the world for an hour and beyond.
Posted by Andrew Haydon at 11:34