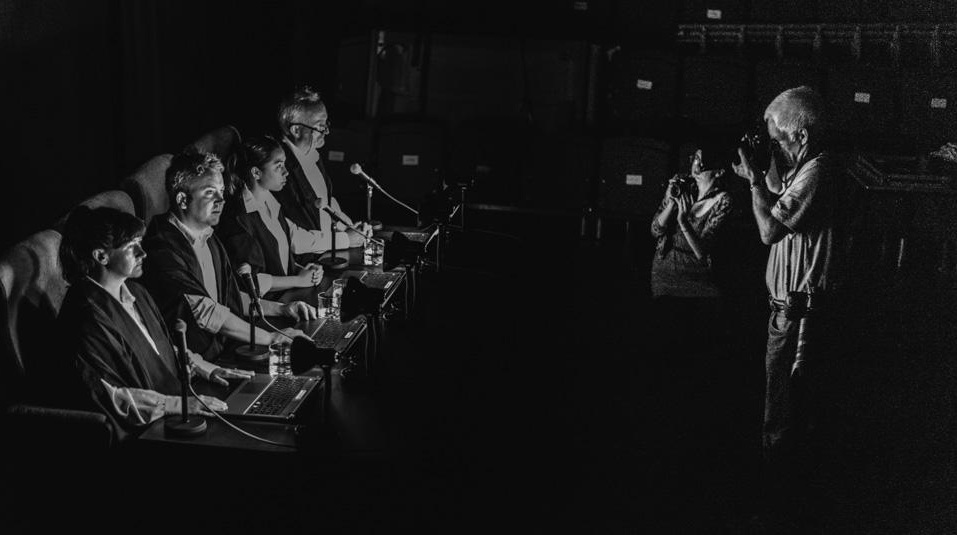 What is it about the deuterocanonical story of Judith that so fascinates artists? From the paintings by Caravaggio, Artemisia Gentileschi and Klimt (among many others) to the previous dramatic treatments by Friedrich Hebbel and Howard Barker, and apparently a bunch of operas and oratorios (one of which I think serves as play-in music here), the story of the beautiful Jewish widow who saves Israel by beheading the enemy general, has enjoyed or suffered countless reiterations and translations across form and nation over the centuries.

David Leddy’s latest take on the story is a fascinating addition to this corpus, transposing the story from the region which is now Israel/Palestine to a war crimes tribunal investigation the Democratic Republic of Congo. He also invokes everything from Kafka (“Someone had been telling stories about Judith K...”), to a curious repeated refrain from ‘Abide With Me’ (“...Fast falls the eventide, the darkness deepens...”) in a postmodern text littered with quotations.

The form of the staging is also interesting: the stage is soberly set with a long table on which sit four identical laptops each with two desk-lamps, one on either side of the screen, to light the actors. And the performers of the piece, dressed in simple legal gowns, are different every day. As with, say, White Rabbit, Red Rabbit before it, they come to the stage text-unseen and simply read it off the screens of their laptops. They are playing “reserve lawyers” (paraphrase – script not printed/available yet), although, being actors, not lawyers-reading-from-laptops, the cast I saw do a remarkable job with sight-reading. I mean, Jesus, they’re good. Enough to make you wonder why everyone doesn’t just save cash by never having rehearsals. Beyond simple financial expediency, there doesn’t seem to be a particularly tangible artistic reason that the performers not be rehearsed, but the very fact of how good they are doing it for the first time ever seemed like more than justification enough.

If you already know the story of Judith, you might find the odd bit of the narrative a bit over-explainy and slow-moving. After all, only one thing really happens in the story, and if you know what it is then you’re kind of sitting around waiting for it to happen so you can go home. That said, the move to the DRC (I’m assuming – all the “interview files” the lawyers are reading out are numbered 21-DRC-75, -76, -77, and so on) means that Leddy has a load of details that he can interest us with. There are descriptions of what they do to women accused of “horizontal collaboration” – something that sounds like it was made-up by Andy Horowitz or Maddy Costa, but more usually the euphemism of choice for sleeping with the enemy (so not *that* different) – recall photos of women hang by French partisans after the overthrow of Vichy France. Across the piece we are reminded time and time again of the way that women are abused in warfare. It’s reminiscent of that line in that Crass song about how war is men’s currency and sex is women’s. At one stage it almost quotes it word for word.

Despite the nominal location change, I found – blame the news – that I couldn’t put the original source material, or its specific location, out of my head. *Of course* the story from the “Apocrypha” (if I’m going to be Anglo-Protestant about it all, which I might as well be since that’s what I am by birth) doesn’t map onto the present situation *at all*. Or at least, would only do so if one effective decapitation of a general would cause anyone’s war effort to disperse. Still, it’s horrifying to be reminded of even the similarities in territorial dispute between then and now. And rather gives the lie to *anyone’s* “prior claims” to anywhere, really. It’s unfortunate that by moving the conflict zone to the DRC Leddy sort-of equates the middle east 3,000 years ago with present-day DRC, which is, y’know, open to accusations of racism. Interestingly, another recurring thing in the text is one lawyer or another keeps saying “it’s Biblical” (as in “a tragedy of Biblical proportions” or something). I guess it’s partly a broad hint as much as anything (and, technically, it’s not, but nevermind).

In terms of watching and experiencing the thing, it reminded me hugely of Katie Mitchell’s production of Simon Stephens’s The Trial of Ubu – The Hague War Crimes Tribunal set up, the row of people staring into the audience, so on... Linguistically, it often feels most akin to that Martin Crimp Attempts on Her Life school of allusion-strewn narration, blank prose rendered suddenly poignant or poetic, even through the irony. In fact, if I hadn’t been so distracted by dwelling on the politics of Israel/Palestine, I’d have probably just spent this review raving about the elegance and playfulness of the writing, and its service to big ideas.

But then, maybe not. Unlike Confirmation and Men in the Cities, the spaces that Horizontal Collaboration opens up – the collaboration the audience makes with the piece, if you like – somehow doesn’t feel as *directed* as Confirmation or Men in the Cities. In both of those (in very different ways) your synapses are put through a mental assault course, but with what feels like very directional instructions: each new component directs your thinking to consider or imagine quite specific things, or perform precise tasks. HC, to me, felt much more diffuse, so my mind wandered more and settled on related-but-distant questions. The thing itself comes ready-pieced-together more, so your activity here is not the creation of meaning, but a relatively simple grasping of it (probably quite early on if you know your Apocrypha) and then freedom to associate that story however you like. It’s interesting to me that as a result of this, I think I found it really surprisingly less “important” as a piece of theatre. I mean, it’s good: well written, brilliantly performed, and very neatly staged; but, I guess it’s also part of that genre of inactive comment-on-the-world plays. And it’s very hard to make those *do* something. Where Men... and Confirmation’s liveness is only part of their appeal. Much of the rest of it is the construction of not only meaning, but also of your own sense of that meaning, and your ethical response to it. HC, by contrast, in a funny way presents a ready-made. The story already part-sealed, and its meaning complicated by the millienia of prior reinterpretation. Although, maybe that’s what it wants us to do – see the DRC through the prism of a tradition of Western Art stretching back over 1,000 years, and further, to a Middle Eastern source 2,500 years old. On one level, of course seeing the DRC through western eyes gives us a precise understanding of the roots of its current troubles. On the other hand, doesn’t it also perpetuate the same process of colonialism which caused them in the first place?