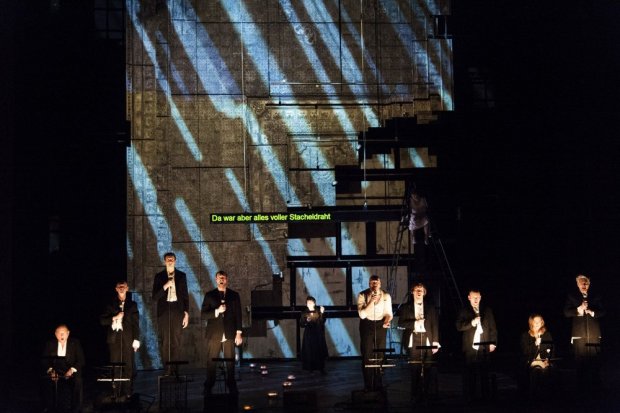 If there’s one problem with the Edinburgh Festival Fringe, it’s that it really breeds your mind into thinking that every show is going to last one hour, which does a disservice to the International Festival of which it is supposedly the “fringe”. I wonder this partly because I found the first hour of Belgian director Luk Perceval’s staging of Erich Maria Remarque’s Im Western nichts Neues (“All Quiet on the Western Front”) and Henri Barbusses’s Le Feu: journal d'une escouade (“Under Fire: the Story of a Squad”) and *some other stuff* brilliant. Harrowing, upsetting, relentless and without hope in all the ways that something dealing with the trench warfare in Belgium during WWI should be. I found the second half relentless, increasingly hopeless, and verging on the harrowing, as an experience of having to still be sitting in a theatre.

Is it the Fringe’s fault? After all, I saw Perceval’s Brothers Karamazov in its home at the Thalia (from which this production also comes) *without surtitles* and that is nearly twice as long, and I somehow loved that. Here I was almost chewing my arm off by the end. Maybe I should have seen it in Hamburg without surtitles. But I don’t think that’s the only problem. Instead, the problem lies with the fact that Front has so many false endings.

Ok, I didn’t really have my German theatre head on, but even so, the problem with the way that the piece has been put together is that in the second half, it keeps having these brilliant, epic moments of conclusion that would have been a perfect place to stop, and would probably have had half the audience on their feet immediately. Instead, such a scene finishes, and another immediately begins. Halfway through the second half, I began to wonder if this effect was in fact intentional. That Perceval was creating a sense of the endless grinding groaning intensity of the war by simply refusing to stop and instead renewing the shelling.

The piece is multilingual. The German, French, and Belgian bits were fine. There were however occasional passages in English. And, Christ, these might have been the worst thing I’ve seen on stage all Edinburgh. The key to why can actually be found in the programme interview with Perceval: “the sections in English make me think of film dialogue, full of clichés – the language of westerns.” And I’m like, dude, that’s THE ENGLISH LANGUAGE, not THE ENGLISH. And then swear quite a lot – in Lancashire, and Yorkshire, Brummie, Cockney, and every other sodding English accent that has nothing to do with a fucking western and everything to do with a bunch of war memorials in Every Single Town In England, you Belgian prick. Anyway. Those scenes were pretty sucky.

Which is a shame, because, as I say, in the main the show was capable of being phenomenal. It evokes a list of adjectives that make you sound like Polonius – complex simplicity, epic intimacy, that kind of thing. Annette Kurz’s set is a towering, textured, flat, black screen which dwarfs the ensemble below, and over which Philip Bussmann’s video design – which consists mainly of pictures of soldiers – plays. Composer Ferdinand Försch’s sound design (although there are also three other sound designers credited) creates ominous rumbling and a dark atmosphere of implied violence. And then there’s the text. I suppose the dramaturgs Christina Bellingen and Steven Heene should take *some* credit (although see above, re: Jesus Christ, you could have made it a bit less stoppy-starty), but really the power here is in the starkness of the original writing.

It’s plain, direct, and doesn’t need flowery literary embellishments. It’s just description after description of true things that actually happened to real people and how the hell it feels living through that. And how it feels is hell. And even sitting in a darkened theatre a hundred years later, knowing that something similar is still going on in countless places outside the theatre walls is enough to make you weep. And that’s all the piece needs really. On some appalling level it just kept on hitting home again and again how stupid and pointless and violent and miserable humanity makes life for other bits of humanity. Front doesn’t offer any answers to that, or even really ask the question why. It just reports it. And, at its best, more powerfully than I’ve ever seen before.
Posted by Andrew Haydon at 16:27