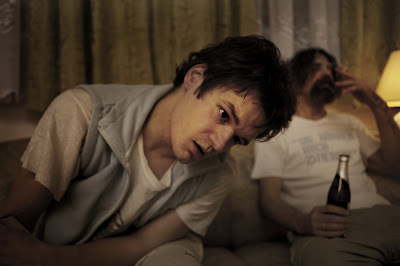 Schwarze Augen Maria invites us into Haus Lebensbaum*. It is open-day and we’re meeting the, what? Patients? Inmates? When entering, knowing nothing about the show, my immediate concern was that a lot of this review was going to be a long ethical tussle about the exoticised use of the real-life learning disabled or mentally ill in performances. Happily, it turns out that the condition under investigation, or perhaps only being contained, at Haus Lebensraum is “Tiresias Syndrome”. Which is totally made-up.
[*Tree of Life House, I guess – although I couldn’t help wondering whether the assonance with “lebensraum” was entirely coincidental.]

This is new, totally immersive, site-sympathetic piece by Danish-Dutch group SIGNA – the brainchild of wife and husband team Signa Köstler (co-director, co-stage-and-costume-designer and performer) and Arthur Köstler (media design and performer) – here made in collaboration with Sebastian Sommerfeld and Mona el Gammel. Thanks to a malfunctioning main stage at the Schauspielhaus it is also the show that kicks off Karin Beier’s artistic directorship in Hamburg. Even without seeing Beier’s cancelled triptych of Greek classics, Die Rasenden (Iphigenie in Aulis, Die Troerinnen and Die Orestie), which was supposed to open the season, you get the sense that Schwarze Augen is an equally good introduction to her tenure; bringing together as it does a notably even-handed gender balance of creatives, a radical, innovative take on the classics, and a notable level of internationalism.

The patients/inmates welcome us as visitors to their hospital-home and after a few prefatory notes, perform Michel Jackson’s ‘Das Lied von der Erde’ (or ‘Earthsong’. In German). It is, all at once, brilliant, incredibly funny, totally serious. Focussed character acting rendering it paralysingly unnerving. We’re in the situation enough to feel that we can’t really laugh openly at such a sincere effort on the part of the characters. We really are in the room, after all, and they – in character – can see, hear and react to us. They don’t force us to pretend, or take a role through either coercion or a slightly naff sense of let’s pretend. They make us do it with manners. It’s an overpoweringly successful way of immersing us. At the same time, this much straight-faced, misplaced sincerity really is incredibly funny.

After the performance, we are divided into small groups by “a doctor” and led away by various patients to see their living quarters. As luck would have it – or perhaps this was the first thing that everyone was told – my group was taken up to an apartment on the second floor and were split up again so myself and another man got to talk to the “family’s” son while next door the two women in our group sat down and had a small coffee with the father. Th son told us that he was an expert on ghosts, or perhaps The (Holy?) Spirit. He showed us passages from the Bible which he had copied out. He sniffed our necks and when he touched our hands he cautiously tasted his fingers afterwards. He criticised us for wearing too many black or dark clothes.

The father, meanwhile, was much more matter of fact. He was sat at the family coffee table and was gradually assembling a model of a motorway pile-up. He showed us the newspaper article concerning the motorway-pile-up he was recreating. A woman had run out into the road causing a truck transporting pigs to swerve and overturn killing the animals. Several other vehicles then ploughed into the overturned lorry. Death everywhere. Nine months later, the children now living in Haus Lebensbaum with their parents were born. And born with these black eyes – large glassy contact lenses worn by the performers. Properly unnerving – and this is “Tiresias syndrome”.

From here we were more or less free to wander about as we saw fit. There were six or seven families, the doctor and, under the stairs on one floor, the woman who had walked out into the road, causing the accident, and whose children had all died, Maria (played by Signa K. herself).

The piece lasts for four hours and the effect is cumulative. You are repeatedly offered coffee and sweets. Every room you go into you notice the complete lack of bright colours. Everything is muted, or pastel, or beige; even the clothes worn by the patients and doctors. There is nothing vivid anywhere. All is fluff and neutrality. Comforting whites and baby-pinks predominate in the children’s clothing. They make themselves elaborate nests in their bunks. And you are offered more sweets. The adults, the parents, look tired, concerned. They are maybe drinking a bit more than is healthy in some cases. Many of the mothers are bedbound, sometimes mute. The fathers careworn and heavy with resignation. The children themselves – older teenagers now – are strange, awkward, curious. Tiresias Syndrome manifests itself as a condition something perhaps most akin to autism, it seems. The doctor tells us that the only medication he prescribes is anti-epilepsy drugs.

Some of the children are affectionate, some are withdrawn. Every so often they all begin to make a strange half-moaning half-singing noise at the same time and gather together in the hallways of the old building. Gradually the dusk gathers outside. At times it really is intensely spooky. You find yourself sitting on a sofa, uncomfortably close to a young girl who only looks at you in a handheld mirror in the gathering gloom, for example, as her mother leans, collapsed and silent against the threadbare armchair; tended to by her heavily bearded, unwashed husband. Free to come and go as you please, and to interact exactly how you like, how intense it all gets is entirely down to you. I tended to keep nipping to the (indoor, God be praised) smoking areas. It was interesting to see a performance in which “parents” and “nurses” also smoked. Some of the parents also drank. And you could share their alcohol, which was totally real.

One thing I didn’t get to do a lot was talk in English. It seemed that the back stories of the children (necessarily) and a good many of their parents precluded that possibility. This meant that most of my afternoon was spent talking and listening in German. As a result, I think I might have had the best experience possible, since I couldn’t try to be “cleverer” than the performers. I couldn’t be difficult, to try to break the story, or test the limits of the immersion. I was already at such a disadvantage linguistically that instead I was incredibly grateful to the performers for keeping everything working around my somewhat limited language skills. That said, for not-great German speakers, the hesitant, simple language of the children especially made it an ideal immersive performance to attend.

This is the most impressive immersive performance I’ve seen (although my experience is far from comprehensive given the amount of this work that exists in the UK), but these really were extraordinary performers: completely submerged in their roles. Mike Leigh-perfect, as I put it to a colleague last night. Utterly convincing, sustained, close-up naturalism; and incredibly life-like casting. Let’s not forget how uncomfortable I was when I went in; worrying that they really had got a couple of minibus-loads of pupils from local special schools involved and what the ethical ramifications of that might be. Admittedly, the fact that they hadn’t could perhaps be seen to raise the opposite question of the ethics of “able-” actors playing “learning-disabled” characters. However, while the specific learning difficulty is that of “prophecy” I guess it’s all pretty much up-for-grabs.

And what one does with the whole thing? Well, I wish I’d had the language skills to pursue the actual “story” further; to really wring more of the narrative from my interlocutors. But, even without that possibility, what there was felt rich and deeply allusive.

If there was a slight question for me I suppose – perversely – it was wanting a bit more pointed-ness or directed-ness in what was being alluded to. On the other hand, the sheer multiplicity of possibilities was incredible. This is a piece dealing with Greek myths, how we treat exceptional children, healthcare, ethics, adulthood, parenthood, childhood and even more banal concerns like “happiness” and our own lives. And all this was there to be contemplated, perceived, or even discussed with the performers. At the same time, just having a whole Midwich Cuckoos-crossed-with-Twin Peaks narrative to walk around inside would be pleasure enough. Also, interestingly (and fittingly, given that neither of SIGNA’s founders are German), this didn’t actually feel like “German theatre” in any meaningful sense whatsoever. That such work is being made here, and so brilliantly, is excellent news, however. 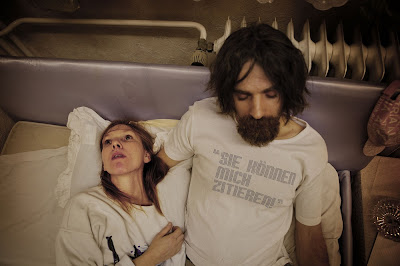