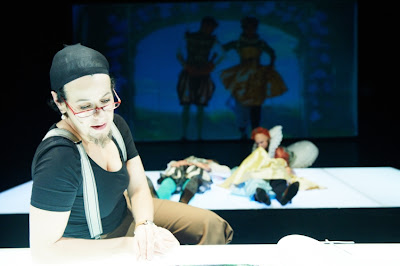 [After posting yesterday’s review of Die Brüder Karamasow, I got into an interesting discussion with two of my international colleagues (a Pole and a Romanian) who expressed their surprise that I would “review” a stage version of a book I hadn’t read, performed in a language I wasn’t always terribly good at understanding. Leaving aside the my unconscious defence that I often don’t really think of what I’m writing these days as anything like as definitive as “a review” or even, often, “a critique”, it’s an interesting question. Then, while leaving Orlando last night, I had an unexpected revelation: “That was better,” I thought to myself, “I understood about as much of that as I understand in the average Shakespeare play...” And a penny dropped: are the British as a theatregoing nation possibly the most used to going to watch plays performed in a language that they don’t speak and frequently don’t even understand? Am I happy letting what actors are saying wash over me in something like the condition of music because I’m so used to it happening at home? Moreover, might there even be something about the purity and structure of the German language (with its Du and Sie and its early-modern sentence structures) that resonates somewhere deep in British bones? Something to ponder. Anyway, Orlando...]

If I only had two consecutive nights with which to demonstrate the sheer uselessness of using “German theatre” as a catch-all term Die Brüder Karamasow and Orlando might as well be them, with the added advantage that they are both “German” takes on the art of novel-adaptation.

Where Karamasow is all high seriousness, austerity and beauty, director Bastian Kraft and dramaturg Beate Heine’s adaptation of Virginia Woolf’s Orlando gathers a surprising amount of its brilliance and emotional force mostly from being very funny.

It opens with the five performers (Sandra Flubacher, Sven Schelker, Nadja Schönfeldt, Cathérine Seifert and Victoria Trauttmansdorff – all great, and all playing Orlando and all the other characters uncredited, except as an ensemble), dressed in the classic stage-version of “their own clothes”, gathered around a table downstage. Onto the table is plonked a book. The book is opened and the word on the first page, “Orlando” is projected onto the video screen upstage via the live feed camera hanging above the table. At the sides of the space are five dressing tables and costume rails to which the performers retire to don their rough, period-indicative costumes. Women don bald-wigs or dresses, and Schelker, the only male in the company, has the first go at being the eponymous hero/ine.

I’ve become a real convert to the Gatz/“German” method of literary stage-adaptation, and I was powerfully reminded of why here: a lot of books really lend themselves to being played on the stage. And not because of their storyline or dialogue, but because of the way that the author addresses herself to the reader: that the novel is so often an exercise in the most direct address possible – instructions for an imagined monologue. In this respect, Orlando is perfect for this sort of immediate transfer of its contents onto stage. The fictional “biographer” that Woolf casts herself as is discursive, inquisitive and compulsive in sharing her fascination with her audience.

However, it is pre-knowing that Orlando is/was “really” written as an extended love-letter by Woolf to Vita Sackville-West, imagining West as this hero-heroine – a kind of immortal traversing space and time, and always somehow radiant, charismatic and adored – which really gives the story its kick. Here, in this staging, I think that aspect is powerfully tangible, but perhaps it might be a case of that thing where once you’ve decided on something you’ll be able to find a trace of it no matter how absent it may be in actuality.

Another crucial aspect of this “multi-media” (as we used to call them) staging is Arthur Fussy’s musik. While the pieces immediately recall Michel Nyman’s scores for early Peter Greenaway films (mostly obviously the long funeral dirge for The Cook, The Thief, His Wife and Her Lover and the Timelapse sequences in Zed and Two Noughts), a crucial difference is that these – at least in the context of the show – feel emotional rather than intellectual. The tunes’ strange quavery insistence give the play its time signature, but also re-plug a lot of the feelings back in that might otherwise be lost in the postmodern fun (and corpsing – deliberate or otherwise) of the quickfire costume changes and buggering about with two overlaid live video feeds. (Yes, this production also has (deliberately) rudimentary Green Screen live-projection, so that we can watch live actors lying on one videoed flat surface projected onto the live-fed picture from the “story book” which functions as a kind of swatch of all the “sets”. Peter Baur’s simple, mobile set of wheeled columns and mirrors accommodate his adept video design perfectly.)

I’m not sure that this Orlando really intends to make us feel anything especially deep, or to reflect hard on the transience of life, or the enduringness of spirit, or anything like that. It felt, as much as anything – perhaps fittingly for an adaptation of a love-letter – like its chief aim was our delight. To make us feel *stuff*: happiness, laughter, and perhaps the odd bit of prickliness behind the eyes.  The ending of this version reaches beyond the scope of the book, which famously ends with the date: “Thursday, the eleventh of October, Nineteen hundred and Twenty Eight.” On stage, the company, accompanied by the small real-time LED alarm clock, which has been present for the previous 1hr36, promise that then entire piece will conclude in ten minutes. Then, with the clock hanging in mid air, they proceed to make ten minutes pass as rapidly as I’ve ever seen in a theatre; projecting increasingly rapid images of the recent past as the present hurtles toward us and them until we finally meet in the absolute present, as if for the first time, and: applause. 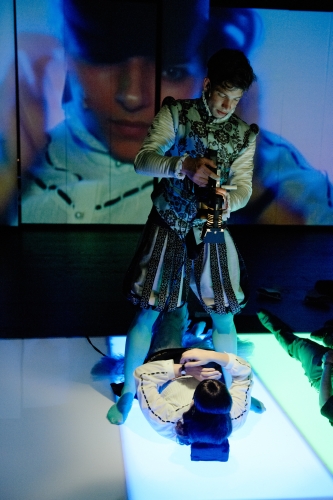 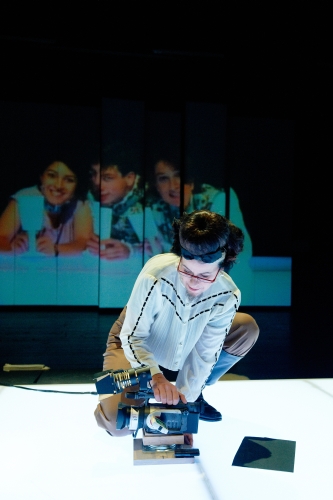