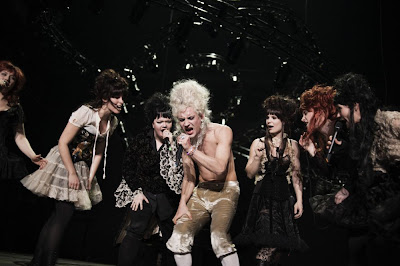 [Well, my run of extraordinary good luck with what I’ve been seeing in Germany had to run out sooner or later. And nothing ever looks as bad in the cold light of morning. But...]

It isn’t original to suggest that theatre is a bit like a machine. All the parts need to be functioning correctly in order for it to work. Sometimes theatre’s total reliance on all the parts functioning every time a piece is performed seems incredibly stupid. All of which is to say: it’s depressing to watch a piece of theatre malfunction. Even more annoying when it seems that the piece of the theatremachine malfunctioning is its audience.

Last night [21/11/13] Don Giovanni. Letzte Party played to an audience of the too-old and the too-young. The elderly chuntered to themselves and occasionally made loud jokes to amuse their friends, the young meanwhile contented themselves with talking through the whole thing and checking their phones. Once in a while what was happening on stage actually shut them up. In conditions like these, it’s difficult to imagine whether in different circumstances the thing actually works. It was shortlisted for TheaterTreffen’13, so someone somewhere liked it, once upon a time...

The piece kicks off with over ten minutes of Leporello (Mirco Kreibich) leading an audience-participation singalong. Five-note scales, breathing exercises, that sort of thing. He does so with an air of Oh-what’s-the-point? – Imagine Forced Entertainment doing a pantomime. No bad thing in itself, but the audience’s reticence-bordering-on-outright-hostility was an early marker of the shape of things to come.

The next section turns this aesthetic around completely: a huge lighting ring of three concentric rings descends from the flies as smoke fills the stage. When it rises again (the sections can move independently, and can tilt all the way up to vertical. It’s bloody great. Every theatre should have one...) the figure of Don Giovanni (Sebastian Zimmler) is revealed, having snuck up through a trap door in the stage. The band appears – eight women dressed as kind-of goth version of Dangerous Liasons – all beehives, backcombs, fierce fringes and rock‘n’roll attitude. One is briefly tempted into believing that all Mozart should have a pounding Mo Tucker drumbeat and be played on bass sax, keyboard, two acoustic guitars, and trumpets.

Briefly, I think I’ve got a handle on the territory. It’s an amphetamine-fuelled version of the David Marton thing, right? Take an opera, get it performed by actors who can sing a bit, deconstruct and dramaturg the hell out of it, and then call it theatre and reap enormous acclaim.

Except here the intent seems a bit more tricky to discern. There’s certainly an anarchic punky spirit to it. This Don Giovanni looks like a cross between Robert Smith and Russell Brand, and the sound of the band, well... Put it this way, this ex-goth was happiest when it turned out that they seemed to be making the overture into Ennio Morriconi’s ‘Harmonica Man’, as covered by Fields of the Nephilim crossed with Bauhaus.

So, yes, for the first half an hour or so, I was pretty much prepared to be racing home to write the rave of the century. And it’s hard to work out where it all started going wrong. Over the following hour and a quarter I think it’s fair to say that the company had a pretty bad night. Arguably the pace drop was an artistic decision. Similarly, the stoppy-starty, house lights up, house lights down interplay with the audience was obviously on purpose. The problem is, if the audience doesn’t play ball when asked to participate, and won’t bloody stop joining in when there’s no room for them, then you’re looking at an artistic endeavour in danger of complete capsize.

The piece pretty much burlesques its way through the plot of Don Giovanni, however, the real coup of the piece comes 1hr40 in (of 2hr30). As Don Giovanni throws his party, he invites “100 women” from the audience onto the stage. It’s hard to tell whether the (plausibly actually 100, probably fewer) young women (six-form age, mostly) who do leap up are actually bona fide punters or plants. I doesn’t matter at all, but I’d be curious to know. Once on stage, the iron comes down. A door in it is opened so we can just about see into the party and there’s a half hour interval, while the party rages (the live band play cover versions of stuff like ‘Sex Bomb’, ‘Word Up’, ‘Rock Me Amadeus’ (!) and ‘Purple Rain’). Eventually, and boy are the company going big on that whole “contempt for the audience vibe – the boldness and extent of which I actually rather loved, and in this instance also thought totally justified (maybe they play nicer with nicer audiences) – the iron is raised once more and the finale plays out rather like a ramshackle curtain call on the last night of a show when people keep stopping proceedings Kanye-style to make their own speeches. And, instead of ending with Giovanni being dragged to hell by an evil robot, he is instead taken off by the sad, sassy old diva dressed in black who has been intermittently singing Eartha Kittsy takes on arias throughout, like some dark angel waiting to take her prey.

And that’s that, really. Instead of a feeling of retribution, ...Letzte Party seems to propose that in a Godless universe where we can fuck our way through everyone we meet, irrespective of what we do, we all die anyway and that’s kinda sad, but kinda inevitable. The days of enormous ghostly cosmic punishment are long gone.
Posted by Andrew Haydon at 10:24