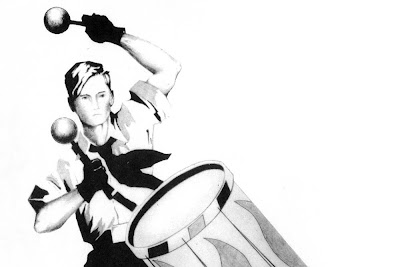 It’s astonishing how little the aesthetics of fascism have changed since the 1920s.

Nic Green’s new piece, Fatherland – wittingly or unwittingly – has the most far-right aesthetics that I have ever seen deployed in a theatre. I am curious to know the extent to which that is deliberate, and the extent to which it is unconscious. And, if conscious, what the effect that this exploration and use of fascist, Nazi, and neo-Nazi iconography is supposed to be.

The Council Chamber room of the BAC is a perfect choice for Fatherland. It is a comforting old hall: high whitewashed ceiling, crumbling plaster-work, and wooden panels. It feels like the essence of a proud, strong history gone to seed – a crucial foundation stone for fascism.

The audience is placed in four banks of seating all facing a single figure in the centre. We are flanked by three drummers on podiums, with short hair, side-partings, and tight fitting military shirts with rolled-up sleeves.

The first, what? fifteen or so minutes of the show feel quite gentle. Green recruits some men from the audience who stand in the opposite corner of the space to her and read some words about “space” (which is here defined as being dependent on there being things for space to be the space between). The piece is apparently, nominally about Green’s meeting with her father, and her interest in her (invisible, inaudible) Scottish ancestry.

She recites the words of a patriotic Scottish song and the speaks in what I assume is Gaelic.

Then the drums kick in.

Fans of Leni Riefenstahl’s Triumph of The Will will recognise the aesthetic immediately. And it has been slavishly copied by bands wishing to invoke neo-Nazi imagery ever since (see: appendix).

Suddenly Fatherland seems a much more loaded title than I think any other reviewer thus far seems to have given credit for. So what is Green really exploring here? Is the piece deliberately drawing parallels between Scottish nationalism and National Socialism? If so, it’s a gesture as provocative as it is overlooked-by-everyone-who-has-seen-it.

What I find more disturbing is the extent to which other reviews have simply, happily bought into the sight and sound of the pounding drums, despite the fact that, minus the half-naked feminist hopping about in the centre of the stage, it feels like sitting in the midst of Anders Brevik’s wettest dreams.

Of course, on one level, it can be simply explained. Drums were pretty much a feature of most militaries – including the Scottish – from a time long before fascism became the word to define this sort of nationalism and militarism. However, since we all noticed that fascism was without exception the greatest evil ever imagined by the human mind, people tend to have been more shy about directly evoking its memory unless it is to make a very specific point, or else to directly flirt with that evil. I am not confident Green wishes to do either. Which makes responding to her Fatherland feel nigh-on impossible in a sensible way.  All I saw was fascism slightly disguised by the presence of a topless Live-Artist. How do you respond to that?

You think I’m kidding about just how neo-Nazi it looks? Check out...

Death in June’s We Drive East (from about a minute in):


NON’s Total War (also starts about a minute in):


And, if you’re ever not sure if someone’s using a Nazi aesthetic or not, then a good rule of thumb is: if it resembles Laibach's pastiche of it, then it’s pretty much a yes – cf. their cover of Queen’s One Vision – in German – Geburt Einer Nation (the lyrics, directly translated from Queen into German become: “Ein Fleisch, ein Blut, ein wahrer Glaube. / Ein Ruf, ein Traum, ein starker Wille” – suddenly a chilling echo of “Ein Volk, Ein Reich, Ein Führer” – the title being a reference to that famous American bit of Ku Klux Klan-endorsing cinema history Birth of a Nation):

Similarly, it was Irwin, the art wing of NSK, of which Laibach was also a part, who managed to embarrass the Yugoslavian government by winning a competition to design a poster for a youth event based on precisely the same Nazi image as the one appropriated by Joy Division (today’s cover picture).

Post script: annoyingly, there’s no actual footage of Fatherland on YouTube, nor are there any full-stage photos which include the drummers (although I’m pretty certain I’m not just writing a review of some weird nightmare I’ve had). What there is, interestingly, is a video by Nic Green called Motherland: