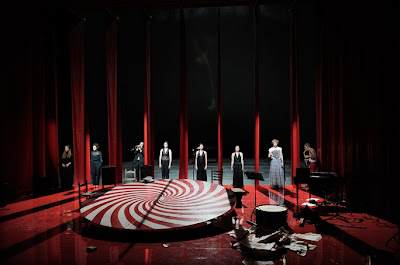 If you think you like German theatre, go to the Volksbühne. To my mind the Volksbühne is almost completely unlike any other theatre in Berlin. The work there feels more more politically committed, more dramaturgically difficult, and just more out-and-out alien to the British mindset. Deutsches Theater? Piece of cake. Schaubühne? Walk in the park. Volksbühne? Ah.

Part of the reason might the longstanding intendant-ship of Frank Castorf, who has a reputation for being a difficult Communist with a preference for destroying Chekhov over the course of five hours rather than say, making a nice watchable production which leaves time for a post-show supper. But it’s hard to say for sure. After all, the Volksbühne is effectively the Berlin home of Gob Squad, and they’re likeable enough fluffy nonsense. And even René Pollesch – Castorf’s second in command – is a bit more visually and temporally user-friendly.

I’ve seen bits of David Marton’s work before. I adored his Die Heimkehr des Odysseus, I was pretty impressed with his Das wohltemperierte Klavier too. But these were both takes – admittedly incredible takes – on extant works. Heimkehr, an opera with a a plot, and Klavier, at least a single cycles of music grafted onto a single book. The approach here is much more similar to the Extreme Jukebox Musical style of Christoff Marthaler’s Meine Faire Dame (which remains one of the best, most life-and-mind changing things I’ve ever seen as regards the possibilities of theatre) – essentially taking any piece of music at all and using it because it feels dramaturgically correct for telling the story.


(yes, really. That made me sit up and take notice, I can tell you)

Nina Simone – Tomorrow is my turn

The Shaggs – Philosophy of the World