[having now written a proper response to a Hofesh Shechter choreography, I feel less irresponsible posting this frankly thin review of his earlier work which I saw in July. Probably best to read the Sun review first] 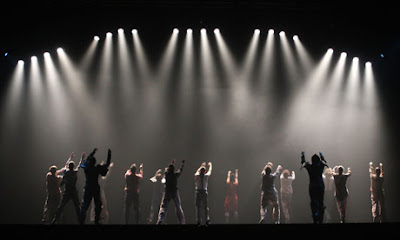 I saw Hofesh Shechter’s Political Mother – the choreographer’s cut an obscenely long time ago now (4th July, according to my diary). And there were logistical reasons why it didn’t get written up over-night. But the reason that it’s taken until now to really dig into writing about it (and this in the welter of pre-Edinburgh desktop and conscience clearing) is that I wasn’t at all convinced I had anything useful to say. [n.b. this paragraph written at the end of July]

As I’ve often whined before, writing about contemporary dance is harder than writing about theatre. But, when it’s grabbed me by the throat and astonished me, I’ve banged out a response as best I could as quickly as possible. But I’m not sure lack of astonishment was the problem here. I definitely came out singing the praises of Lee Curran’s lighting design to the highest heavens, but I wonder if there’s a slight hitch when you’re most struck by a lighting design at a piece where the pyrotechnics are meant to be taking place under the lights.

The basic deal with Political Mother is that it’s a whacking great gig slapped on top of some – surprisingly episodic and slight – contemporary choreography. The stage is set up so that the dancers are on the floor, in a first tier around them on three sides is a classical string section, and on a platform above these is a several-piece rock band. The lighting and set is such that any section can be completely plunged into darkness and obscured completely from view.

The music is kind of excellent – although not as loud as it could be – but mostly it sounds like a slightly less intricate Godspeed You Black Emperor or the Sisters are their sludgiest. At times the band is joined by a vocalist, singing inaudible/incomprehensible lyrics while throwing Great Dictator shapes. The net effect in these cases is essentially Rage Against The Machine. Nothing more, nothing less. And there’s something a bit Stadium Rock about the whole thing.

Then there’s the problem of the title. I think if it had been called anything which didn’t include the word “Political” in the title (which, as it stands, comes off sounding like a Freudian slip and you wonder what word he meant instead of “Mother”) it would have been less problematic. As it is, it feels like perhaps there ought to be more content. Even without knowing Shechter’s Israeli roots, the combination of vaguely ersatz Middle-Eastern-sounding music and the – perhaps not obviously Jewish/Israeli, perhaps so – Batsheva influence on Shechter’s choreography, combines to put one vaguely in mind of “the Middle East”. Which is quite a, y’know, “Political” place. At the same time, the posturing dictator-like figure most readily recalls the ideologues of mid-C20th fascism – although there’s also perhaps something of a suggestion of later African dictators in the uniforms from Idi Amin to Col. Gaddafi.

The net effect seems to imply something like “Well, there are a lot of politics in the world”; maybe even something like: “all politicians are the same”; perhaps a hint of “if voting changed anything they’d make it illegal”. Perhaps it’s the music. Perhaps it’s the circular dances; and the raised hands of the dancers: as if in worship, or in the thrall to an analogy of another political cult that demanded raised hands. Of perhaps it’s a gesture of surrender. 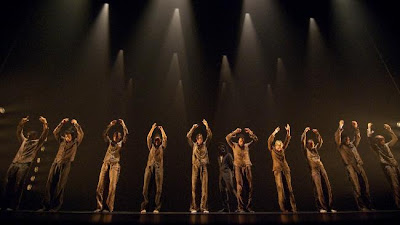 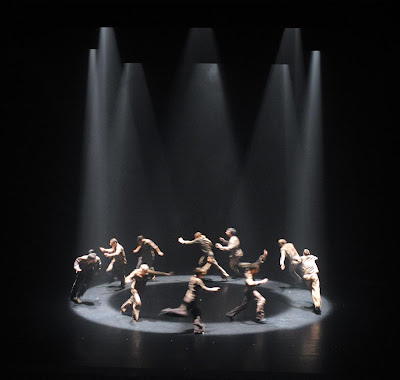 (as an aside, it still strikes me as remarkable that no one took a decent photo of what the WHOLE STAGE looked like)