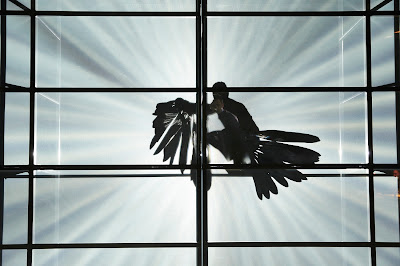 As a way into understanding some of where “German theatre” is currently at, Nach Europa would serve peculiarly well. It is an adaptation of the book Trois femmes puissantes (translated to German as Drei starke Frauen, or Three Strong Women) by Marie NDiaye, a mixed-race French author. It has been adapted by the director Frederike Heller. It is about the struggles of three (confusingly four, here) women to reach various parts of Europe from various parts of sub-Saharan Africa. All four African women, self-described in the staged text as young, slim, and black, are played by an older, larger, white German woman.

And of all the above facts, the most surprising thing is that there is a German theatre doing a play about immigration issues. At least, it is surprising that they are doing an immigrant’s-eye-view of the issue. Even if it is third hand. Adaptations of novels are common (this week, I’m seeing versions of Brothers Karamazov and Orlando; next week, René Pollesch’s take on Splendeurs et misères des courtisanes). That the director just knocks up the version of the novel they’re doing themselves is de rigeur. Getting a playwright in would be totally weird. And of course several young black women are played by one older white actress.

The discussion about the German habit of using white actors to play black characters has been had before. I defended it in The Stage about this time last year in response to Bruce Norris kicking off about it. But, what with the leaps and bounds being made, especially at Berlin’s Gorki Theater – at least in terms of equality of opportunity – it is all starting to look a bit curious. On one hand, I totally accept any argument which says that employing actors who are “really” black in order to secure a spurious sense of authenticity is nonsense. On the other hand, not then deploying them elsewhere, as a further means of trashing spurious senses of authenticity – “real” white people as Danish princes, for example – means that you’re effectively just cutting the chance of employment for any black, Turkish, whatever actor down to nil. Which is dumb at best. And, well, racist at worst. Germany’s problem, it seems, is to still accept “white” as a gold standard of neutrality. And all BME actors as Other. (Indeed, flicking through the DS SpielZeit 2013-14, I can see only one BME actor and she is Japanese, which I’m pretty sure doesn’t quite reflect Hamburg’s make-up.)

Talking to a colleague after the show, she voiced the concern I daren’t even name: that this production was letting “fat” stand in for “black”. We both hoped that it weren’t so, but the fact that this was a conclusion so easily arrived at rather suggested to me that someone somewhere hadn’t been terribly clever at the conceptual stage. Perhaps it’s exactly the sort of provocation we should try to brace ourselves for. There is a very real prejudice against fat people. There is a very real prejudice against black people. Perhaps this sort of exchange makes us see both prejudices more clearly. Although I’m not especially convinced. I think instead, it glosses all prejudices together into one big fluffy ball of “not nice” and completely obscures all the issues in doing so.

In terms of the piece itself, if you’ve seen one play about the hardships, trials and tribulations of those migrating from Africa to Europe you’ll know exactly what it was like. Possibly many of this audience never had, and the bits where something appalling happened – at one border checkpoint we are told a man’s feet were slashed with a machete – the theatre still fell appropriately silent.

The staging was engaging enough, if a little ‘so what?’ after four hours spent with SIGNA in the afternoon. The two actors – Matthias Bundschuh and Bettina Stucky – were both energetic and charismatic, talking almost interchangeably to us and each other. Indeed, this direct audience address was far and away the most notably successful aspect of the production. I should also record that there is a third performer credited, the musician Peter Theissen, under “Mit:” in the programme. And if I’m happy to include the musician as the fourth member of a Romanian dance quartet, I don’t think I should necessarily start thinking differently just because this is theatre. And he took the bow with the two actors, so perhaps I should widen the scope of how I was thinking about the performance. In my defence, he was sat behind Sabine Kohlstedt’s opaque wall of a set.

Re: the set, while on one level it looked pretty much like any identikit anonymous wall in any European airport, all bolted together shiny pre-fab sections (albeit here rendered in differently light-able plastics and gauze). However it did occur to me, pushed so far forward, it could equally suggest those gradually stepped sets that the Germans often use as the sets for their productions of Greek Tragedies. Except here, the production is not Greek, and the steps are slammed shut like the fold-away tiers of retractable raked seating. Modern tragedy, it suggests, is a sheer wall, not gradual steps. It’s almost certainly an over-read, but it’s an over-read I became very fond off while watching this most basic and repeated of stories.

And it is precisely this – this issue of repetition – that poses precisely one of theatre’s greatest current challenges in approaching these narratives and explorations of immigration: that, contra Tolstoy, lots of families (and individuals) are now unhappy in exactly the same way. The challenge, if we want theatre to continue to take notice of them and make any kind of difference, or even just to just keep on being watchable, is how we make these representation as alive and vital and urgent as theatre must be and as their stories demand.

For my money Nach Europa didn’t succeed, but it definitely provoked a hell of a lot of useful questions.

[oh, and re: top image, at the start there was that image live, a bloke wearing feathers in silhouette, for about two minutes. And it was the best bit of the show. The rest of it looked more like... 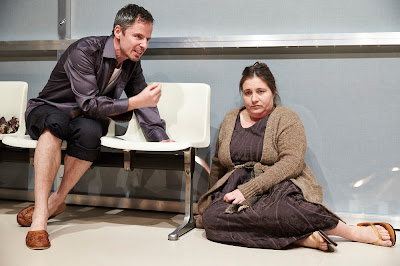 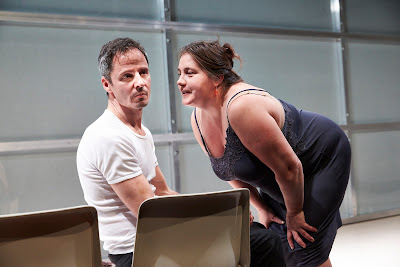 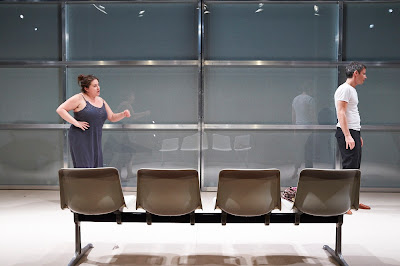 I have no idea what:
"Veroeffentlichung gegen namentliche Nennung, Honorar (Umsatzsteuersatz 7%) und Belegexemplar"
means, but I'm happy to take the photos down again rather tha actually pay to use them...
Posted by Andrew Haydon at 21:58