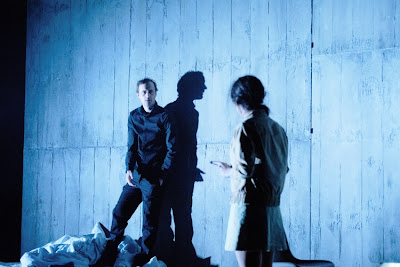 It opens with a woman wearing a short shift dress and a rabbit head singing ‘Can’t Get You Outta My Head’ incredibly slowly into a vintage microphone which is suspended from the ceiling.

[Good. There have been far too few animal heads (previously none) and nudity (still none) this week. Even the big tellies and microphones have been in short supply. I was starting to worry that this wasn’t Germany at all.]

[Actually, I entered Revolver Traum under a slight misconception. I was only familiar with the writer Lola Arias as a collaborator with Stefan Kaegi and Rimini Protokoll, so from the vague blurb on the site (lovingly rendered meaningless by Google Translate thus: “Behind the title “Revolver dream” to hide the same three pieces of the Argentine. Three stories about life, love and death. You draw people in a big city in search of refuge, people who want to understand why they are unhappy, why love is broken or can not come, they want to understand what keeps them alive, what makes life valuable. At the end they find themselves in an eerie dream again, is played in the Russian roulette. They all vie for a ball to put an end to her life. Maria Origin tells these stories as tender and touching evening of theater in which the stage continues to rotate, 32,000 sequins coming up at the end to the fore: strung lovingly flickers the dream past us.”) I suppose I was still vaguely expecting something Rimini Protokoll-y involving “real people”, non-performers (“experts” as RP call them).]

[Anyway, I should stop pissing about and tell you about it.]

After the brief rabbit-headed lady singing, Revolver Dream *proper* (ha!) opens with a man and a woman sitting on a low bed pushed against a coldly lit concrete wall. Upon entering, the man has slipped a small revolver under the mattress of the bed.

It is nearly pitch black. The man is in his boxers and a t-shirt. The woman is wearing the same light green embroidered slip- dress as the rabbit-woman. The man flicks his lighter compulsively. They are talking. They plainly don’t know each other very well. They’ve only just met. What they’re saying, well, what they’re saying could be approached any number of ways – playful, flirtatious, languid, erotically-charged... – here it’s blank and blunt, deadpan. They’re not really saying anything of consequence. It’s reminding me a lot of the opening of Blasted. But somehow less pointed. They talk *a lot* about animals. She talks about a chicken she used to have as a child? He talks about a dream he has about a pony sitting in his bed? (man, I could be getting this wrong.) She explains that her mother is dead, and how her father didn’t want a chicken in the house because they’re dirty. He talks about playing Russian roulette. At some point she reveals that she is only 16. He is 36. He springs off the bed like he’s been burnt. Her dad isn’t much older. She turns more challenging. What’s wrong she wants to know. Suddenly she’s pointing the gun at him. The conversation has suddenly turned to “love” and she’s got a loaded gun...

Then the scene changes. The solid-looking concrete walls at an oblique angle to the audience suddenly turn out to be fold-able so that the man and woman are now divided by a wall pointing straight at the audience. Microphones are brought on. As the performers walk round and round this short right angle the man meets another man, hands him the revolver and the second man remains. It’s a bit like a theatrical version of that thing that happens in recent David Lynch films where a character suddenly becomes another character, or rather the same character, but a different actor, and a different person. Oh, you know the films. You explain it.

In this next bit (which seems like it might be Arias’s piece “Striptease”, if descriptions elsewhere are anything to go by), sees two parents conduct (what is described elsewhere, if it is Striptease as) a telephone conversation while their child cries in between them. This isn’t signposted anywhere in the performance, however. They might still be intended here as a later version of the same couple, perhaps. Same, but, thanks to the change of male actor, different. And, similarly, the microphones, while possibly standing in for telephones, might equally just represent a distance between the characters or a desire by director Maria Ursprung to amplify their voices so that they can speak very quietly and we can hear the texture of the quiet voice amplified.

The third section, which follows another scene change – this time with the flexible “back” wall (it’s actually cutting off quite a lot more of a much deeper stage/room) being straightened right out and then revolved several times on a central pivot in an effect similar to Gotscheff’s staging of The Persians. The wall turns out to have a spangly giant-sequined reverse to its concrete side. And it comes to rest with this facing us. In front of this big bronze shining backdrop is plonked a dowdy sofa, a workaday coffee table, and onto the coffee table, a cushion with the placed revolver on it like a crown.

On the sofa sit three larger-than-life puppet humans. From left to right a fat, ginger man, a hollow-cheeked, dead-eyed woman and then an older, bald “schauspieler” with an expression of continual disbelief, disgust and incredulity on his big, immobile, papier mâché face.

These three types are asked a series of questions, big questions about life, love and death, and they all have stabs at answering. There seems to be some level of jeopardy. Perhaps the one who answers wrong first is going to have to pick up the revolver and Russian roulette themselves (let’s face it, it’s a TV format waiting to happen)... 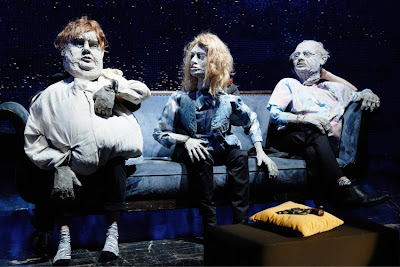 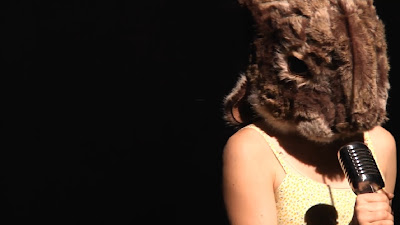