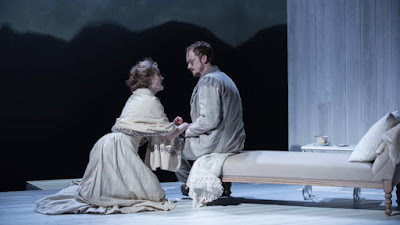 [Because the Almeida had asked me to do their podcast about naturalism during the run of Little Eyolf, I found myself trying to watching the production through that frame of reference. Which, as we shall see, was deeply unhelpful. It should also be noted, that the previous thing I saw before Eyolf was Roar, China! in Warsaw a week or so earlier. And, well, let’s be honest, I hadn’t been having a great time with British theatre generally since BITEF. So, this posting stands in more as a snapshot of my state-of-disgruntlement than as a reasonable review. Hence my having sat on it for so long.]

The weirdest thing about watching Richard Eyre’s new production (of his own adaption) of Henrick Ibsen’s Little Eyolf is actually how incredibly NOTHING WHATSOEVER it has to do with naturalism as I understand it.

But, I realise, I have next to no idea what anyone does mean or understand by naturalism. (This, incidentally, is a growing irritation of mine. I really want to write a book for the Theatre &; series called Theatre & Taxonomy – perhaps as a satire, or a Theatre version of Flaubert’s Dictionary of Received Ideas – which will lay bare and expose the sheer laziness of the way our theatre is written about and consequently thought about. Not least, often, by me.) But – more annoying than my own lack of knowing – is my growing feeling that no one else has the faintest idea what they mean by it either.

In terms of naturalism, I found the first scene of Little Eyolf more or less unwatchable. NO ONE behaves like this. No one. Basically it’s a husband and wife (and, Christ, that takes long enough to unearth), their son and the husband’s sister, or half-sister, or something. The main problem – in terms of naturalism – is the way they’re talking. L____ is so florid and classical-sounding you’d think she was actually singing an aria. Her voice seems to swoop up to a sentences first word, then daringly plummet through the sentence to magically end up back at the height from whence the swoop begun for the end. Like a kind of sonic trapeze act. Or, sometimes, I think she does it the other way round, starting low, hitting a high, and then descending back into a low for the last bit of a clause or sub-clause. I think sometimes it’s even more athletic than this. I’m attempting to describe it properly, not because I think it’s unusual, but precisely because I think it’s very usual indeed, ON STAGE. I think Imogen Stubbs probably does it most. Or perhaps Felicity Kendall. You can imagine the sort of thing, though, right? It’s kind of ok in Private Lives, or something. If you want to imagine a world of posh ladies half-singing their way through their merry lives then this is the voice you want them doing it in. As a way into serious Scandinavian drama it seems incongruous.

Against this, J_____ C__ barks his lines, mostly to us, the audience. But sensitively. He does pained barking, pleading barking, blustery barking, and sometimes, just to reassure us of his virtuosity, barking-barking. But for the first scene, fuck me there’s a lot of barking.

Now, I don’t want to be mean to actors. Generally I hardly notice them at all, and this seems very unfair indeed. They’re only following orders, after all. But because I was thinking about “naturalism” all I could think about watching Little Eyolf was how *unnaturally* everyone was behaving. Their child comes on and does a fairly decent job of acting precisely what he is: a child, on stage, acting. This sense is further compounded when the ratcatcher character comes on with an actual dog, who is mesmerising by virtue of actually being entirely convincing as a dog. In fact, I probably missed a good deal of the dialogue for the entire duration that the dog was on stage.

Dan Rebellato (who was also on the Almeida podcast) has written a sublime appreciation of the play, and it’s worth reading, not least because it half-addresses why I found the play impossible to watch as naturalism.

The set for the piece (Tim Hatley) is at once impressionist, symbolist (perhaps, although not in an overtly suggestive way) and *a bit* naturalistic. In short, it looks pretty much like most British sets look now. A kind of end-of-days mash-up of a theatre culture – running from the Globe, through Victorian painted backdrops, through the Royal Court Revolution, Brecht’s Berliner Ensemble tour, and the multiple interventions of modern technology – that has arrived at a point where a white-painted wooden frame/platform with some chairs on it, looking out to a digital picture of some mountains is immediately understood as indicative and vaguely realistic, despite really being almost entirely abstract. I mean, it’s a really weird state of affairs. It’s an attractive stage to look at, but not really to watch a play performed on. The colouring is so Scandi- that it feels almost parodic, while the laid-back, washed-out, Elle Decoration/Habitat natural soothing colours would make it a lovely set to live in, but possibly a harder one to get excited about the action taking place there.

All of which happened, despite the childish and picky tone of this review, without me really *minding*. I just felt a bit bewildered and lost and alienated. And didn’t really understand what I was meant to be trying to get.

Thank you for articulating how I felt about this production. I'll be less kind than you and say it was actively awful. 50 Shades of Beige.