Disclaimer: dear music fans, and people finding this using Google, I am in no way a music critic. I’m a 40-year-old theatre critic who’s writing about a band I happened to see last night, largely in relation to a play I saw earlier in the week. I mean, Christ, by all means keep reading, I’d love it if you found it interesting, but don’t say I didn’t warn you if you don’t.

So, I ended up watching huge chunks of Fat White Family live largely through the lens of having seen Cleansed on Tuesday.

My first thought was this: here we are again, watching a strange, compelling spectacle – one that appears to have no necessary/specific narrative coherence (other than by virtue of our travelling forward in time though it), one that is fuelled largely by an intensity of spectacle, and by skinny white boys in various states of undress looking like they’re about to get smashed up.

How would it be if we were to transfer precisely this gig to The Dorfman? Because, well, part of what’s extraordinary about Cleansed is what it does to the audience. And what the audience does to itself. The fact of being as good as locked in, and belted to your seat (if only by yourself), *is* interesting. It made me wonder if some of the weird feedback that the show has got comes from that aspect of it: the way that it makes us recognise a kind of genteel institutionalised violence that is visited on the audience.

It reminds me of Minute 7 in Chris Goode’s House of the Future:


“A friend of mine once went to see Fiona Shaw performing Beckett’s Happy Days, and hated it. After the final words were spoken, and the stage lights had dimmed, right then in that little niche of reverent blackout time before the inevitable rapturous ovation, my friend, without entirely intending to, found himself saying aloud: “Utter shit.” All eyes turned on him and he now describes it as the most embarrassing moment of his life. The level of embarrassment he experienced seems to me to reflect the violence of the situation. For some, that violence will appear to be contained in my friend’s exquisitely timed heckle, just as those in the seats around him clearly adjudged his wounding remark – wounding not just to the actress on stage but to the silence that was rightfully hers – to be a violent act. But isn’t it rather that my friend was acting in self-defence, in the refusal of a tyrannical violence that the whole apparatus of that theatre event is designed to uphold? That system demands a total complicity, and our choices are three: silent assent and collusion; tacit distantiation; or to speak, and thus ventriloquize the violence that inheres in the situation.”

Sarah Kane once famously remarked that she found football more exciting than theatre. Having only ever seen the odd football match on telly, I’m not really qualified to compare the two. I will note that at football you’re allowed to stand up and shout at the players. And move about a bit.

There’s a similar level of feedback permitted here. Singer/Vocalist/Frontman Lias Saudi even dives into the crowd often enough that were anyone feeling that they had some feedback to offer, they could do so, eyeball-to-eyeball. There’s a kind of violence that inheres in this situation too, but it’s arguably the exact opposite of repressive.

My second thought was the extent to which the same criticisms levelled at Kane have also been levelled at the Fat Whites. *Clearly* they’re immature, gratuitous shock-merchants, who don’t understand the rules properly. Neither of structure (musically), nor of engagement politically. They write things almost as if they’re trying to get up people’s noses deliberately. Things that there aren’t even necessarily a decent, rational defence for intellectually. Other than the one they use: “an invitation, sent by misery, to dance to the beat of human hatred”. As a result, people seem to have an unusual level of vitriol reserved for them (as there is for Kane. My God, the comments under Michael’s review seem to ignore both the review and the production and head straight for *her*).

If it’s not clear, I have quite a lot of time for people putting that stuff out there and seeing what happens. I’m not sure I think they necessarily need to be able to articulate precisely what it is they’ve put out there. In terms of where critical theory was at (at least when I was at university), the extent to which we’re shaped by our times, and that our reception is also so shaped, means that we’re almost certainly just recycling cultural energy and sublimated institutional violence to some extent. Perhaps the point of the artist is just to arrange some of what’s already around at a fixed point in time.

My third thought was related to how the Fat Whites perhaps extend this idea of cultural reproduction in a period that is so riddled with theories of hauntology, and The End of History, and Retromania, and recycling, and the futility of attempts on originality (and yet still scorn for the unoriginal and the derivative). So, yes, listening to their songs played live (an experience almost entirely unrelated to how they sound on record), is an experience in synaptic meltdown. “What’s that bit from?” “What does that sound like?” was pretty much the whole of my critical thought-track throughout. If pressed, I think I got it down to “an interesting six-way between Throbbing Gristle, the Glitter Band, the Dead Kennedys, Talking Heads, Hawkwind and the B52s”. There’s a couple of chords where they even turn into Simple Minds (specifically ‘Don’t You (Forget About Me)’). And, of course, for me, they had something early Sisters of Mercy about them. Maybe even The Sisters doing ‘Ghostrider’, which is pretty much Mornington Crescent in this critical game, right?

That Sarah Kane is also an acknowledged literary modernist postmodernist in the mould of Eliot is already well-documented. Not only quotations, but also quotations of style (and styles used in quotation marks). But also quotations of atrocities. The violence in Cleansed is all second hand violence. Kane can’t be accused of making anything up. Every atrocity can be sourced. Similarly, I wonder if the Fat Whites’ use of glam rock stomping and the kind of air of brown suited-ness and the smoking indoors Seventies – also their early The Fall attitude and indebtedness – is a similar, abstract confrontation of something grisly and sordid in the recent British past. They’ve got a song about local Manchester doctor Harold Shipman, but their style repeatedly recalls Jimmy Savile-era TOTP, too. They’re the first band I’ve seen who appear to visually and sonically acknowledge that the history of rock is “now” a deeply problematic thing. This isn’t an homage, it’s almost like a direct finger-pointing accusation. Sounding like The Glitter Band, indeed. In a different way, this almost brings us back to the creepy, distorted electronic screams of Suicide in Cleansed.

A fourth thought was this: it was bad luck that just before I saw Cleansed I happened to re-read my review of Cedar Lake Contemporary Ballet in which I’d quoted something Nick Ridout had said to me about Sasha Waltz’s Continu:


“it was the pervasive tone of the whole enterprise... is particularly hard to take. The idea that Kunst and Kultur (of a certain modernist high-mindedness) can redeem horror through the consumption of autonomous art. I am thinking here about Adorno’s observations about such work, in Commitment.

“Each crumpling body is so dancerly, the image so strong and clear, the setting so abstract, the political specifics so utterly absent, the executioner and his final victim so equal. The squalid political viciousness of any event it might be thought to represent or allude to is utterly overwhelmed by the beauty of it all and our recognition of that beauty (and in that recognition our belief that knowing such beauty when we see it makes us unlikely to participate in a firing squad).”

I found these criticisms haunting when I watched Cleansed. What would be my answer to them in that instance? At Fat White Family it struck me that we were more being asked to participate in the brutality. That we weren’t so far away from ugly mob violence ourselves, while at the same time, almost everyone there was manifestly unsuited to such action. And doubtless acutely aware of it. And, what could be less like the reality of mob violence really than a bunch of intellectuals and hipsters dancing about? So, perhaps there’s no way out of our priggish pacifism. Whatever we do with it, we’re condemned to be what we are, and our attempts to think about atrocity are doomed to be facile. And meanwhile, elsewhere, someone else does the torturing. Perhaps both the Fat Whites and Cleansed are helpful insofar as the fact that they at least confront us with the fact that our “confronting” this sort of “difficulty” is wholly futile and entirely self-indulgent. Perhaps at least the Fat Whites then give us something to then do with our self-revulsion.

I was also reminded of a Johnny Rotten quote I used as a blog title nine years ago here:


“The kids want misery and death, they want threatening noises, because that shakes you out of your apathy.”

I think that can be applied to Cleansed. And to the Fat Whites.

There’s an interesting thing about hostility. I can’t pretend that I know what Kane wanted Cleansed to do. What effect she wanted it to have. And I don’t know what effect Katie Mitchell wants this production to have either. Nor do I know what Fat White Family really want to “achieve”. It is – incidentally – interesting to me, that talking about wanting to identify what effect a band want to achieve seems much more unlikely as a line of inquiry. Perhaps that’s a useful thought to hold on to when thinking about Cleansed. *Should* pieces of theatre have any more *aim* than a gig? Can they not chuck a lot of ideas and visions and feelings and sounds at an audience and a feeling of total sensory disorientation be the point? No one minds gigs doing that. Is that only because people are allowed to stand up and shout when they’re at gigs?

The interesting thing about hostility is where it goes, perhaps. If there is something about Cleansed that is an attack on *something*, you can’t just get rid of once you’ve seen it. You can admire the attack, you can take the attack personally, you can dismiss the very idea of attacking things as misguided, but the effect of it happening seems to linger on, haunting the mind like smoke hangs on clothes.

An interesting thing about the hostility and the disorientation for anyone writing about the piece – especially with a wordcount, especially positively – is how to sell it.

On one level, I wonder if this is also a property of the production. That is presents the hostility beautifully, and in doing so makes it into something even more difficult.

There’s definitely something difficult in wanting to acknowledge, or suggest that some of the gestures in Cleansed are violent in this production.

And also something difficult about acknowledging the difficulty of the form. Like there still isn’t a proper language in theatre crit. that doesn’t somehow invoke a model of correctness that Cleansed fails. Without having ever attempted to surmount it.

At this point, I’m more fascinated by the fact I still feel compelled to try than anything. 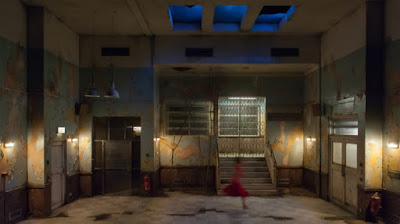