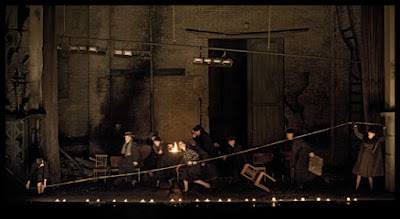 It’s fascinating to consider this revival of Katie Mitchell’s 2013 production of Frank Martin’s (1938-1941) opera/oratorio, Le Vin Herbé, in the light of the work she was making at the time and the work she’s making now. (And there’s also a lot more point in me doing that than trying to situate Martin’s music within the development of twentieth century modernism.)

The piece itself is a cycle of 18(?) songs(?) which adapts Joseph Bédiers’s Le Roman de Tristan et Iseut (1900). As such, the piece is fascinating first for its being a (then) new French take on a story that in Germany forms such a cultural cornerstone in the form of Wagner’s Tristan und Isolde (lines from which even find their way into the equally canonical (and similarly problematic, anti-Semitic) The Waste Land), and for its being written at precisely the time when Wagner-fan Hitler actually went and invaded France.

Mitchell’s staging (which, as always, should properly be viewed as collaborative – chief amongst which, in my experience of this piece, being Lizzie Clachan’s astonishing stage design) sets the performance in a bombed out theatre in France in 1942 (according to a review on the Staatsoper site. I wouldn’t have known to guess specifically France, or specifically 1942; Deutschland‘45 made just as much sense to me as I was watching).

The music itself is Difficult. Capital D. I mean, it’s beautiful, yes. But without even words (for me) to hold onto (performed in French, surtitled into German, plus opera-singing to make the French difficult and, well, after a while, the feeling that there wasn’t much to be gained by my concentrating on providing my own third-rate German translations) it is Hard Work. Don’t get me wrong, I don’t mind Hard Work, but it would be remiss of me not not mention that it definitely is. It’s slow, sepulchral, icy, haunting, but a-melodic. If I knew it well, it might have been easier, but I didn’t.

The staging adds a huge amount the music, but does so at the music’s pace. This isn’t such an intervention that it feels like an imposition. Indeed, having seen it, it now feels incredible to think that nothing seen on stage is directly ordered by the music – being an oratio, it’s just as plausible for concert performance, and *nothing* about it demands that it be set in a bombed out French theatre with moonlight and snow falling through the ceiling.

I find this thread through Mitchell’s work – the idea of a naturalistic frame around some non-naturalistic performances – completely fascinating. We (apparently) saw it in Attempts on Her Life, in which (I’m told) there was an invisible framing device, wherein the actors were playing actors in 1997. This is obviously a much bigger development of that idea – having real opera singers *playing* French opera singers performing in a bombed out theatre during WWII.

Strangely, it wasn’t until reading an (this, unrelated) interview this morning, that it occurred to me to link the idea of a bombed French theatre with the Balaclan Théâtre attack, but I wonder if that resonance is now another part of the performance now.

Visually, the piece reminded me most of all of photographs I’d seen of Mitchell’s Oresteia, and of Complicité’s Street of Crocodiles. Physically, there is some continuity from the scene-change-“doctors” of Pains of Youth or the sphinxes of Alles Weitere..., but here they’re also subordinated by both the naturalistic frame of bombed France, and by the music, which seems to prevent the usual near-violence with which they intervene.

In the light of all this, and my not having really understood any but the barest bones of the libretto, much less appreciated its literary weight or even the impact of its meaning on any gut level, it’s kind of impossible for me to offer any sort of a final “assessment”. It’s clearly beautiful, and full of brilliant ideas. The music is also performed beautifully. The music remains slow, and beautiful (rather than, say, energising, or sentimental enough to provoke an emotional response – from me, at any rate). Overall it made me realise (not for the first time), that I often have pretty cheap preferences and desires in theatre – that it be adrenalising, and emotional, and fast. And the greatest of these is fast. Which this isn’t. As such, I’m at a massive disadvantage reviewing this. I can see it’s brilliant, but the brilliance somehow didn’t cross the orchestra pit and also move me. A strange and tricky thing to experience, and a stark contrast to her forthcoming Cleansed. 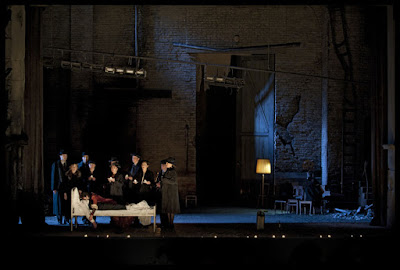