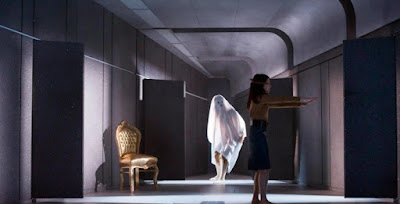 There is a brilliant moment relatively early in Carrie Cracknell and Lucy Guerin’s new dance-theatre version of Macbeth that encapsulates all that could have been hoped for from the production.

Anna Maxwell-Martin’s Lady Macbeth is delivering her “Was the hope drunk?” speech. When she gets to “I have given suck, and know / How tender ’tis to love the babe that milks me” she just stops. For ages. She and John Heffernan’s Macbeth look at the floor. Look at a wall. Maybe they do even look at each other, but it seemed like they were both lost in their own private grief. And it’s so good. The stillness, the poigancy, the performances, everything. Here, I think, was this production’s justification for these Macbeths’ murderous rise to power; shell-shocked grief and nihilism. If your whole world has been emptied of meaning, why not advance to the top of the externally defined order by violently breaking every rule of hospitality and decency? A lot of the script has been cut here, it seems like a reasonable enough rationale.

However, mostly this production doesn’t really work. I’d have liked it to have done. There’s no earthly reason why it shouldn’t have. But due to some weird alchemical failure, it really didn’t take off on press night. (Although one reads encouraging things on Twitter from people who have seen in more recently, and it’s in Birmingham and Manchester in the New Year, and so might get itself sorted out.)

It would be easy, I suspect, to just blame the unfamiliar dance elements that have been brought to bear on Shakespeare’s play. But I don’t think it’s that. There’s absolutely nothing wrong with the concept, just the realisation in this particular instance. Ok, there are some technical issues. Rather than feeling like dance-theatre it feels like dance *and* theatre. Alternately. And the twain very rarely meet. Either people are dancing or they’re standing stock still and speaking. There isn’t as much dancing as you might wish for, and it maybe sometimes feels more like stock routines from the post-Shechter school, mixed with a more music-video sensibility, than, well, that any of the high-points of dance theatre that you might care to name (inevitably Café Müller, right?).

Perhaps as a result, the “acting bits,” as we must regrettably see them, not only feel isolated, but also wildly underpowered. This Macbeth lacks narrative drive or momentum like a cheap simile. Lizzie Clachan’s false-perspective underpass set works brilliantly as a set *for something*, almost in spite of itself. And there is something admirable about the way that the sliding sections do somehow manage to achieve a kind of internal architectural logic even when they shouldn’t. (That’s badly explained, but it’s bloody impressive). Nonetheless, the effect of the setting, when combined with the costumes, is to make “Scotland” seem like the name of a Vauxhall S&M club – perhaps with a middle-Eastern dictatorship theme – undergoing a series of very aggressive management takeovers.

Indeed, things were so unclear that I nearly succumbed to an attack of the DWMs. Like, *who* are these people? *Where* are these people? *What* are we even looking at here? I mean, *I* know Macbeth, but it really did feel more like watching a series of sketches based on the faint memory of the play. Which, again, could have been fine. But here seemed not to be.

I desperately wanted to like this production, not least because it was two hours long, but it just didn’t happen. No doctrinaire *reasons*, it just felt like it didn’t gel. Great idea on paper. Lovely poster. But, no. 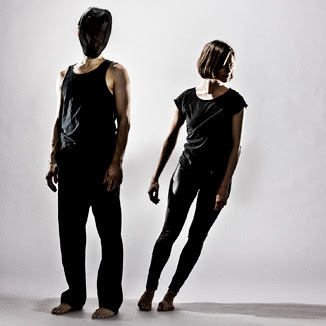 [This review is now about two months old, and the whole thing could have improved beyond recognition since it was written]
Posted by Andrew Haydon at 18:01